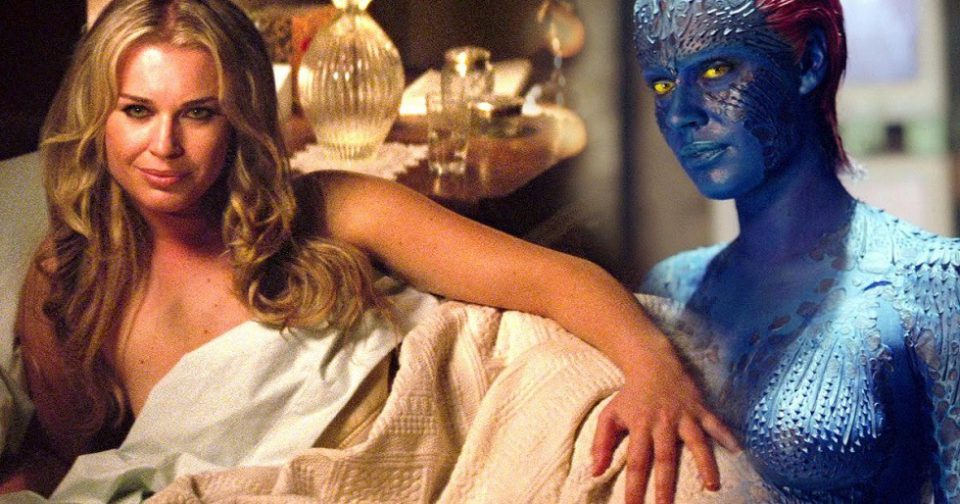 Rebecca Romijn is the American actress and former model, best known for her role as Mystique in the trilogy of the X-Men film series. She also acted as Joan from The Punisher (2004), both of which are based on Marvel Comics. You might have also caught her recurring role as Alexis Meade on the television series Ugly Betty, and as Number One on Star Trek: Discovery. Her other major roles include as Eve Baird on the TNT series The Librarians, which ran for four seasons, and as the host of the game show Skin Wars which she rightly belongs to after sitting for prosthetics and makeup for 9 hours to play Mystique!

1. She isn’t worried about getting older or going barefaced in Hollywood:

Actress Rebecca Romijn shared how she has been able to, over the years, embrace her features with pride.

“I don’t have a huge fear of aging,” the 47-year-old told People magazine, where she posed with no makeup at all. “I think life is a whole game of acceptance,” she revealed, “I think when you, especially as you get older, you just have to accept certain things and accepting your looks to a certain extent is part of that, just growing up, maturity.”

“I always thought my mom was so beautiful growing up, no matter how many lines she had on her face,” continued the actress/model. “I admired my mom’s laugh lines. I find peace in that and hope that when my daughters look at me, they do too.”

And this is what she said to Buzzfeed about her twenties, thirties and forties:

She embraced herself proudly by going without ANY makeup once before. The Sports Illustrated model revealed that she completed her first no-makeup photo shoot about 10 years ago: “The first time I did it I had brand new twin baby girls and this time around they’re 10 years old and it’s been a lot,” said Romijn. “It feels like a lifetime has passed.”

Speaking of Sports Illustrated, Romijn was also the first model to pose in only body paint and nothing else for the magazine.

“That first time and I think hopefully they’ve worked on it since then, but that very first time when I went through it — it was a 12-hour paint job… You can’t really sleep. You have to help out and get into some very awkward positions. You have to stay still in those awkward positions for long periods of time. You get to know your painters very, very well. And they get to know you very, very well. You sort of have to get zen about it. Like you sort of have to leave your body at a certain point before you go nuts. And then, if it’s water-based paint, you do your shot, which takes not nearly as long as it took to paint the masterpiece that’s on your body. And then you go wash it off and it goes down the drain like that.”

Well, this experience might have helped her bag the role of Mystique!

2. She was the reason John Stamos wasn’t in a show written for him:

Stamos and Rebecca Romijn famously split after 7 years of marriage but many don’t know that, “Nip/Tuck” creator Ryan Murphy tried to cast Stamos as a prostitute after “Full House” went off the air. But he said no because of Rebecca.

The Full House actor said: “Ryan wrote ‘Nip/Tuck’ for me, but the person with whom I was in a relationship at the time read the script and said, ‘That’s demeaning toward women.

“He wanted to do three male hookers, like ‘Charlie’s Angels,’ who’d go in and save relationships by having sex with the husband and the wife. Maybe I was too afraid then,” he said.

3. Jerry O’Connell and Rebecca Romijn met when they were both in a relationship:

The acting couple first met at a Maxim Hot 100 party in Las Vegas back in 2004 while Rebecca was still married to John Stamos and Jerry was dating Guiliana Rancic. According to Jerry, they had an instant connection.

“I met my wife and her ex John Stamos at a party when they were married. I remember thinking, ‘Wow. This girl is really beautiful and funny.’ I talked to her the whole party. My wife remembers that party and remembers us clicking. We clicked. My wife and I clicked. We clicked the first time we met,” he revealed on The Jess Cagle Interview.

According to O’Connell, they ran into each other at another Maxim party when she was separated from John Stamos, which is when they had their first date.

“I hung out with her pretty much all day and her friend. We went out to dinner that night, a group of us. It wasn’t any kind of date. Then her friend, a guy said to me, ‘Take her phone number. I think she wants to call you.’ I was working it. I got her phone number, and I called her, and then we met up after that Vegas trip back in Los Angeles. We went out,” O’Connell revealed during The Jess Cagle Interview. “My wife was right. We had a sleepover, and I never left. It was great.”

Jerry O’Connell has worked in Canada for the shooting of his show, Carter. The show is set against the backdrop of North Bay, Ontario.

4. She and her husband credit their long marriage to having “crazy kids”

Jerry O’Connell and Rebecca said “I do” in 2007 and the couple have 11-year-old twin girls Dolly and Charlie. In 2017, O’Connell joked to Fox News that he’s surprised his marriage to Romijn has lasted for so long.

“And all of our Hollywood friends now just think we’re weird. Like, ‘Why are you guys still together? That’s not how it works.’ We’re like ostracized because we’ve been apparently together for too long.”

He jokingly said that the secret behind their lasting marriage, is “have crazy kids.”

“And then when you have kids, you’re afraid of giving up because one of you is going to be stuck with them. So you have to stay together. No, but what is the secret? I don’t know. Please don’t ask me. That’s what Dr. Phil is for. But I don’t know, we have a really fun home. And it includes all of our dogs. And crazy dogs do keep our house fun.”

During an interview with Buzzfeed, the actress stated that the makeup and prosthetic application for the movie helped her connect with Jim Carrey’s statements about having a psychologist on call for mental issues:

“Honestly, it felt like eternity! Nine hours on the first one. By the third one we got it down to in the seven-hour range. But the first time they did my makeup test it was a 12-hour test and I did not think I was going to survive the experience. I really didn’t.”

“The Mystique costume that I wore was 75% prosthetics. So a lot of it was giant silicone pieces and I had to put on a fresh new set every single time. I think they made like 30 sets for each X-Men that I did — there were three — and I would put on a fresh set every single time. And because so much work went into making these prosthetic pieces, they were always begging me to be as careful as possible taking them off, but I was like, “GET IT OFF ME!” It was crazy-making.”

“I actually read an interview with Jim Carrey when he did The Grinch and he said he had a psychologist on call for mental issues. When you’re in that kind of makeup, it feels claustrophobic. When I read that, I completely connected with him. There were many moments when I felt like I needed to talk to somebody. It’s sticky. I would ask them to leave my hands clear for as long as possible, because it was like my only connection to sanity. Leaving my palms clean was all I had!”

10 Best Online Horror Games to Scare the Bejesus Out of You!

These are in fact wonderful ideas in about blogging. You have touched some good points here. Any way keep up wrinting.