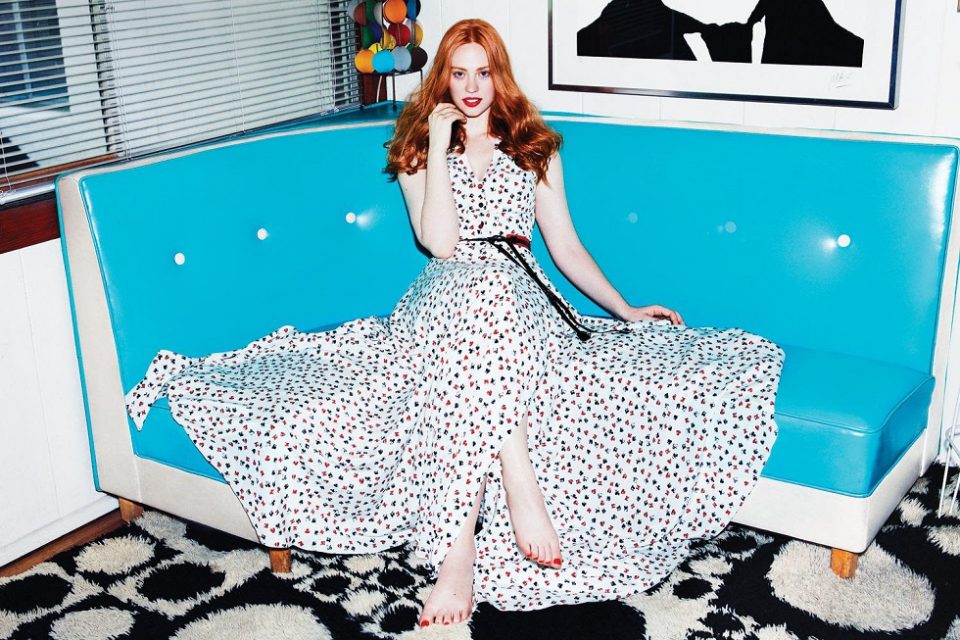 Deborah Ann Woll is best known for portraying Karen Page on Netflix took the role once again in the recently released second season of The Punisher. But before that she was a vampire you root for every Sunday night, for her role as Jessica Hamby in the HBO drama series True Blood. She was cast in The Defenders and garnered huge fame through her roles in TV series and films inducing Mother’s Day, Catch .44, Ruby Sparks, Meet Me in Montenegro, and The Automatic Hate (2015) and Escape Room (2019). In this article, we discuss her personal life, her hobbies in gaming and singing, her television career and movies.

The character first debuted in Daredevil. In the first season, she discovers evidence of criminal activity at Union Allied Construction and is framed by Wilson Fisk for stabbing a coworker to death in her apartment. After two further failed attempts on her life, Matt Murdock and Foggy Nelson intervene and are able to exonerate her, and hire her on as Nelson & Murdock’s secretary. She, Foggy, Matt and Ben Urich, become a crucial turning point in the effort to bring Wilson Fisk to justice.

Hailing from Vermont, Karen works as a waitress at a diner run by her parents. Lake Ontario isn’t very far from where she is. When her mother dies from cancer, she is left to run the diner with her father Paxton and her brother Kevin. In order to keep up with the stress, she turns to drugs and hooks up with a dealer named Todd Neiman. One day, Kevin stages an intervention by burning down Todd’s trailer. Todd gets angry and attacks him with a tire iron, and Karen is forced to shoot him with the gun in his truck to keep him from killing Kevin. As she is driving away, Karen gets into an argument with Kevin, during which she drifts off the road and crashes into a guardrail, injuring her and killing Kevin. Sheriff Bernie hid the fact that Karen was driving the car. Going into depression after the loss of Kevin, Paxton tells Karen to leave town as he doesn’t want her around.

During the November cancellation of Netflix’s Daredevil, actress Deborah Ann Woll had said that the upcoming sophomore season of The Punisher is “most likely” her final time playing Karen Page: “I miss her very much,” Woll wrote Friday in an Instagram post. “Be sure to watch!! @jonnybernthal is amazing in it! So is everybody! Hope it gets to continue for a third season.” She also tweeted:

“I’m so sad that we won’t be continuing this story,” “Mostly I’ll miss seeing the friends I’ve made everyday. Thank you to every person who contributed to this series over the years. And to [showrunner Erik Oleson] because of you we are going out on a high.”

Deborah Ann Woll in The Punisher:

In lieu of a strong start, the streaming giant unceremoniously cancelled Iron Fist, Luke Cage, and Daredevil – their flagship Marvel series – with some warning and even less explanation. Although fans of Netflix’s dark and gritty take on the street-level heroes of New York City would still have Jessica Jones and The Punisher to look forward to. This is what the actress said about joining the show in an interview:

“When they knew they were going to do a Punisher show, I hoped that I would get to be a part of it. And then, eventually they call your reps and ask for your availability, and all that stuff. When I found out, I was so glad ‘cause I really love the relationship between Frank and Karen, and I’m certainly not done telling that story yet, not even after The Punisher Season 1. There’s still more that I’d like to dig into. Any opportunity that I get to strengthen those stories is a good thing.”

Thinking of her status as one of the most prolific characters in Netflix’s corner of the MCU it’s not entirely surprising to see that Deborah Ann Woll had popped up in the 2nd season. The character she played, Karen Page, served as a key role in The Punisher’s arc on Netflix, from his first appearance in season 2 of Daredevil to his own solo series. The Punisher is a kind of person who will probably be sued by a lot of people’s personal injury lawyers.

Everyone’s favorite angsty teenage vampire has come a long way since we saw her in the swamps of Louisiana, venturing into her hobbies of cosplay and gaming.

Deborah Ann Woll plays Dungeons & Dragons, appearing online in the series Force Grey (2017). She spoke about playing with Joe Manganiello and the rest of the Force Grey cast.

She also plays D&D on the Stream of Many Eyes where Deborah Ann Woll was DM or “the Dungeon Master” for celebrity players.

Relics and Rarities isn’t a typical Dungeons and Dragons game, it will include immersive props, sets and much more to bring everything to life. Interestingly, the game itself is unscripted which means a bad (or good) roll on the dice could send the adventurers in any direction possible. The trailer showcases what to expect each week, a room designed to work with the story being told as well as items the players can inspect and interact with. The show has guest stars included her fellow Daredevil actor Charlie Cox as a pirate arcane trickster named Seamus O’Flanigan, True Blood actress Janina Gavankar as the half-elf rogue/tomb raider Mumee, Luke Cage actress Simone Missick as a human paladin named Zora Ujasiri, Veep actor Sam Richardson as the gnome ranger Ionis Leatherfoot, and ofcourse, director Kevin Smith as the tiefling warlock/private detective Sam Haynne. Watch this video of Relics and Rarities Storyteller Deborah Ann Woll with Kevin Smith to discuss the creation of Sam Haynne:

Her show was perfect for longtime fans of Dungeons & Dragons and newcomers that have never played before. If you’re a fan of the fantastic Dungeons & Dragons, watch the show full of peril, puzzles, and danger in every episode.

Deborah Ann Woll was a guest player on Critical Role (an American web series  which ran from 2015 to 2017, where a group of professional voice actors play Dungeons & Dragons).

She guest starred in the 45th episode of Critical Role’s second campaign as a small gnome girl named Twiggy.

channels her inner songstress when she sings George Gershwin’s ‘They All Laughed’ in the video below:

On February 7, 1985 in New York, Deborah Ann Woll was born to an architect and a teacher at the Berkeley Carroll School. Her parents are of Jewish German and Irish descent. The American actress attended the Packer Collegiate Institute for high school, and received her Bachelor of Fine Arts from USC School of Dramatic Arts at the University of Southern California. The actress got her start by training at the Royal Academy of Dramatic Arts in London.

What is Deborah Ann’s Age?

She is 35 years of age. The American actress, Deborah Ann Woll who has a net worth of $2 million was born in Brooklyn, New York in February 1986. She is best known for playing the role of Jessica Hamby on the TV series True Blood.

What is Deborah Ann’s Height?

She stands at the height of:

Back in 2007, Deborah Ann Woll, a 23 years old actress just  fresh out of the University of Southern California’s theater school, was sifting through profiles on match.com. A cute 32-year-old comic named E.J. Scott, caught her eye. Then they met and fell in love; then their life changed when she landed the role of sexy vampire Jessica Hamby on HBO’s True Blood and her career took off.

“I kept clicking through her photos, and there was one that had this great big smile. I’m a big smile guy. Her profile said she liked Mystery Science Theater 3000 [a show canceled in 1999]. She was so pretty yet so nerdy! I just had a feeling about her, so I really pressured her into meeting.”

They married on their 11th anniversary in 2018. “Deborah and I eloped in December! On our 11th anniversary! It was beautiful and pretty perfect for us,” Scott stated alongside a selfie of himself and Woll. “Ps we still call each other boyfriend and girlfriend. We like that better. Please don’t call her “Mrs”. Thank you,” he continued.

The pair met eleven years ago waay before the flame-haired beauty found fame as sexy vampire Jessica Hamby on the HBO series and during that time Scott was diagnosed with the disease when he was 27 named choroideremia, or CHM, a rare genetic disease causing blindness, almost obliterated his vision. E.J. Scott once said: “I didn’t have it on there at first, but it was weird to go on a date and then tell somebody. I’m light sensitive [CHM harms the eyes’ photoreceptors, so sun or flashbulbs are temporarily blinding]. I’d have to ask, “What if we met in a dark place?” And that doesn’t sound good! [Laughs.]”

The actress once commented about the illness: “It was a very scary thing and he was so open and positive about it and spoke about his fund-raising and I thought “I could be dating a hero” and how lucky I was. I think I fell in love then.

The disease starts with a loss of peripheral vision and as it progresses the sufferer is limited to tunnel vision. Shortly before he found out about his condition, Scott had settled on a career as a performer, taking classes in stand-up and eventually moving to Los Angeles, where he met Woll. Scott then moved to Chicago to pursue his theatre work, but their relationship endured the distance for three years. Revealing the current condition of his eyesight, Deborah said ‘It’s still progressing, he’s legally blind.”

‘The way they mark is that a human being can see 180 degrees so if you’re less than 20 you’re legally blind and he has less than 20 in each eye. ‘Sure, it hurts and it will only get worse. We need to be positive as it will get worse but who he is is not defined by his sight.’

Since then the actress uses her celebrity status to help raise awareness of the disease. The actress even said that Scott’s bravery in fighting his disability has inspired courage in her own battle with celiac disease. CD is an autoimmune disorder which causes damage to the small intestine upon ingestion of gluten.