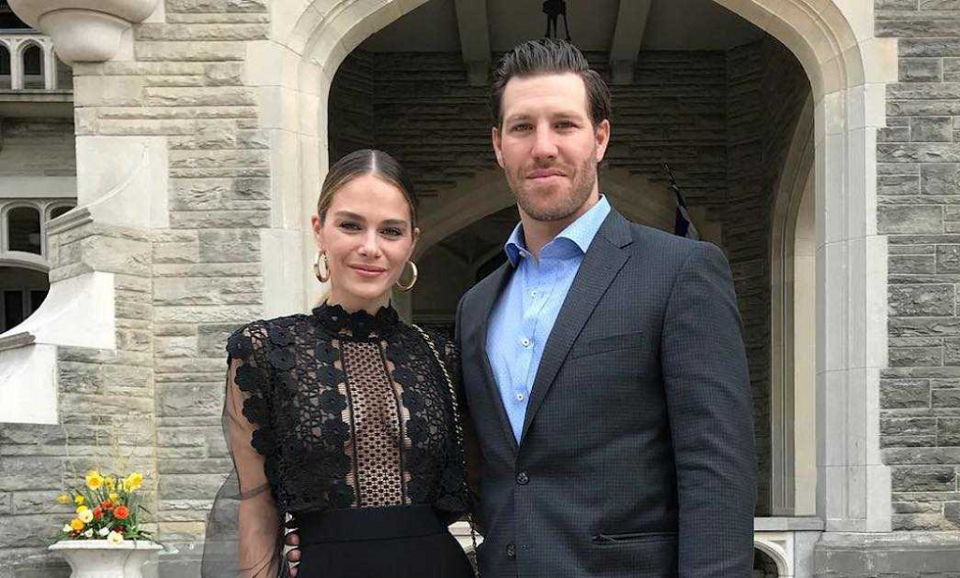 Most well known for co-hosting the French Canadian television program Menage a Trois, Maripier Morin is also notable as a model and fashion expert. As an online personality, she has accumulated 50,000 Twitter followers and over 550,000 Instagram followers.

Maripier Morin the beautiful host and model born on July 7, 1986 in Quebec City, Canada. She is a popular French Canadian television host who rose to prominence as a contestant on the Quebec-produced reality television series Double Occupancy. The show is in French, one of the many languages spoken in Canada. She has ranked on the list of those famous people who were born on July 7, 1986. The 33 year old is one of the Richest TV Show Hosts who was born in Canada.

Maripier Morin has had a high-profile relationship with Canadian professional hockey player Brandon Prust. They had been together for 10 years and became one of the most famous celebrity couples in Montreal. They said their “i-do’s” in 2017 after Prust’s NHL career had ended thanks to an end following one season with the Vancouver Canucks after the Canadiens traded him in exchange for Zack Kassian. Prust and Morin were featured on the Hockey Wives reality-TV show on the W Network.

Hockey star Brandon Prust grew up in London, Ontario, where he attended Regina Mundi Catholic College. Over here, he excelled in multiple sports, and was recognized as the outstanding student athlete in 2000–01 school year. The number 8 he wore with the Canadiens is the same number he wore as a football player in high school. His favourite team growing up was the Toronto Maple Leafs, and his favourite player was Wendel Clark, after whom he has tried to model his game. He has an uncle who was a Broadway actor. Brandon’s interests besides hockey include golf and watching baseball.

The former professional ice hockey left winger, began dating Montrealer TV host Maripier Morin in 2010. On June 22, 2015, the couple got engaged and subsequently married in 2017. She has been a cast member on three seasons of the Canadian reality series Hockey Wives. In September of 2019, the couple announced over Instagram that they were separating after 10 years together, of which two years they were married.

Following their split, she wrote on her Instagram post: “Life is not a long calm river and it brings its share of waves. Brandon and I, after a long thought, decided to continue our routes separately. I would like to sincerely thank you for your love and support over the past 10 years. These are extremely difficult moments and thank you in advance for respecting us in our desire not to talk about it further. Life is a long road and often comes with challenges. Brandon and I have decided to go our separate ways. It’s a very difficult time for both of us but it’s a good idea to have a good time. We will not comment on it, thank you for respecting us.”

Meanwhile, Prust wrote on Instagram too saying: “Maripier Morin and I have decided to go our separate ways,”…..“Thanks you everyone for your love and support over the years.”

What is Maripier Morin’s Net Worth?

The salary of the former participant of Occupation Double who has climbed the ranks in an impressive way seems high, but she is one of the only personalities who dares to reveal it.

French Canadian television program host Maripier Morin’s net worth was disclosed in 2019. She said that her business brought her $1.3 million in revenue in 2018. However, she also said that she, herself, earned a gross salary of $150,000 plus $100,000 in dividends.

Although her FULL salary is not revealed yet, it’s better to check out the net worth of other well known TV presenters in the country to get an estimate of how much money she makes because the number above could come from ad revenues. Considering the fact that Maripier Morin has been hosting for the past 12 years, we can chalk up her net worth to quite a larger sum. Her marriage could also have thrown something extra her way, especially since her husband spoke about her conning him.

The former hockey player published a photo of an advertising campaign for the Rockland Centre with his old flame. Accompanying the photo was this message: “Still haven’t seen a penny from this ad with @centrerockland that @maripiermorin made me do.” After three hours, the star deleted the photo from his Instagram account, which has more than 208,000 followers. In his second caption, Prust alleged that Morin “conned” him: “She made 120k and I made 40k, which I never got. Guess she conned me on that too.”

If Maripier has often talked about moments when she was completely broke, she also talks about her big years in bars: “We never went out without $400 in our pockets. You do that 2-3 nights a week, it’s damn money. And it’s cash money. But everything that came in stood out. There was no saving, we did not put a penny aside. “

But today, it is elsewhere: Maripier is a blogger, she signed contracts with brands like Blush, Buick, Revlon, Bon Look and Reebok, and it is also a host and actress. You can think of TV shows, or even the movie The Fall of the American Empire. The celebrity may have married a hockey player, but for her, it’s got nothing to do about money, it has always been about passion. Unlike many hockey wives, Maripier would not have just stayed at home. Due to her passion, she brought in $ 1.3 million in revenue to her business in 2018. However, she says she paid a gross salary of $150,000 plus dividends of $100,000.

It’s quite an amount, but the host thinks it was a record year in her career: “I won’t have more years like this. It’s once in a career, ”she thinks.

But how does she spend this money? She analyzed her finances with a professional in the reality show episode, and even she was surprised. Her biggest expense is her clothes, her make-up and her hairdressing costs for various professional outings, or for the many galas. If Maripier is well recognized for being perfect from head to toe, we can say that she pays the price of $ 78,000!

One expense that made her ex-husband react was his travel expenses – $ 38,289, exactly. “$ 39,000 is an annual salary! (…) My father will be in your ** after me! She said, discouraged. In her defense, the host explains that in 2018, she went about two weekends a month to London, where Brandon Prust, her husband at the time, lived. If we are often discouraged by looking at the amount we spend at the restaurant, Maripier is no exception. That’s $ 20,162 she spent in restaurants in 2018.

What Is Maripier’s Height And Weight?

Are You Playing the Right Casino Game for Your Personality Type?

10 Tips To Know Before Shopping at Wayfair Canada