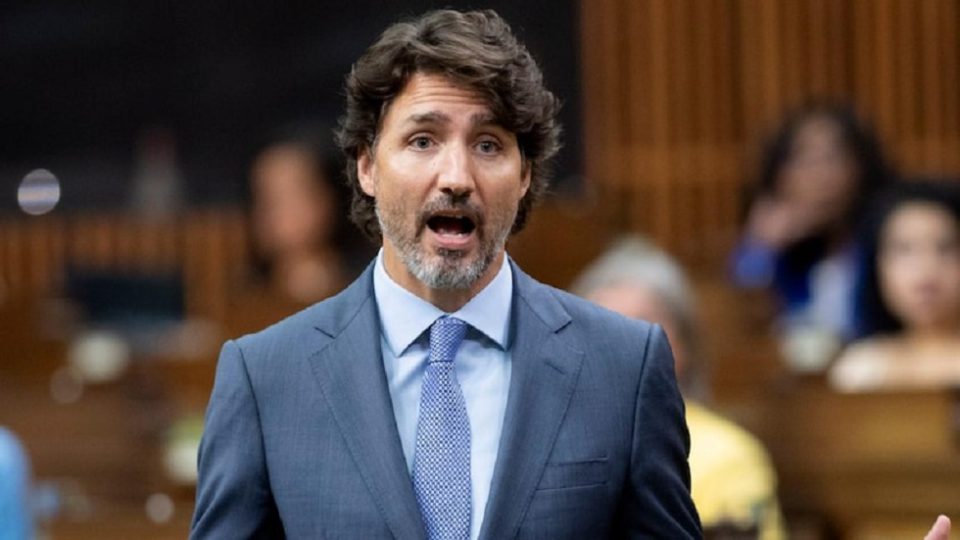 Justin Trudeau, born December 25, 1971 in Ottawa, is a Canadian statesman. Son of former Prime Minister Pierre Elliott Trudeau, he in turn held the post of Prime Minister of Canada since November 4, 2015. In 2008, he was elected Member of Parliament for the riding of Papineau in the House of Commons. He became leader of the Liberal Party of Canada in 2013 and became head of the federal government following his victory in the 2015 federal election. Justin Trudeau thus ended the decade that Conservative Prime Minister Stephen Harper had spent in power.

Due in part to the unpopular positions taken by his conservative opponent Andrew Scheer, he was re-elected as prime minister following the 2019 federal elections, his party however failed to secure an absolute majority, which this time forced him to form a minority government. During his second term, he dealt with the Covid-19 pandemic, announced a ban on assault weapons following the 2020 massacre in Nova Scotia and faced a third ethics investigation due to the WE Charity scandal. With that done, let’s dive into some intriguing facts about PM Justin Trudeau.

Until the age of 12, Justin grew up in Ontario, at 24 Sussex Drive, the residence of Canadian prime ministers. Why such a specific residence? This is because he’s the son of former Prime Minister Pierre Elliott Trudeau.

When Pierre Elliott Trudeau left politics, Justin was 12 years old and the family moved to Montreal: from then on, the Trudeau children grew up in Montreal. After a high school course at Collège Jean-de-Brébeuf, where he spoke in favor of the Canadian Constitution and the unity of the country,  he obtained a bachelor’s degree in English literature at McGill University and a bachelor’s degree in science from education at the University of British Columbia.

3. During his first term, he legalized cannabis and attempted Senate reform

On “International Cannabis Day”, April 20, 2016, Federal Minister of Health Jane Philpott announced the intention of Canada to introduce a bill to legalize and regulate marijuana for “recreational” purposes, in particular to limit the black market.  This bill was tabled on April 13, 2017 and was finally adopted on June 6, 2019. It was planned to set up prevention programs managed by the provinces and that the minimum age of 18 can be increased according to each province. The text also provides that citizens can have four plants of a maximum of 100 centimeters in addition to legal possession of 30 grams of cannabis in public.

Believing that the Senate is undermined by the two major problems of sectarianism and political favoritism, Trudeau also announced in January 2014 a reform plan under which “only elected members of the House of Commons will be members of the national liberal caucus”.

Once in power, Trudeau appointed to the Senate only persons recommended by an independent advisory committee to which any Canadian citizen aged 30 or over and under 75 can apply.

In December 2018, out of 105 senators, there was a group of 54 independents, 31 conservatives, 10 independent liberals, and 10 without affiliation. Trudeau was considering changes to the Parliament of Canada Act so that financial resources are no longer distributed between two parties (that of power and the opposition) but between all groups. It thus aims to consolidate its reform of the senate and to take a step backward more difficult.

For his part, Conservative leader Andrew Scheer intends to revive the old practice of appointing only Conservative supporters. According to a historian specializing in the field, this would be a mistake and a waste, because, on the whole, the reform of the Senate has been beneficial.

4. He also introduced a federal carbon tax and signed the Paris climate agreement

In December 2015, a few weeks after his election, Justin Trudeau participated in the 2015 Paris Conference on climate change. On April 22, 2016, he went to New York to sign the Paris climate agreement, which will be ratified on October 5, 2016, following a vote in Parliament, and will enter into force on November 4, 2016. At the Marrakech conference in November, he submitted Canada’s strategy for making a transition to a low-emission economy and recalled that “his government has committed to providing $ 2.65 billion over five years to help certain countries to fight against climate change”.

Despite these ecological declarations, he signed a project to export liquefied shale gas from Prince Rupert, to a value of $ 36 billion.

In June 2018, Parliament approved a major bill on pricing greenhouse gas pollution. Andrew Scheer, leader of the Conservative Party, opposed the bill and, in the months that followed, will base its electoral campaign on the promise to abolish this “carbon tax”, despite the fact that this measure is not a tax because it is tax neutral, as analysts and the main newspapers remind us. Several provinces are applying to the courts to have the law declared unconstitutional.

On June 28, 2019, the government published a draft standard on clean fuels, which should lead, when it is implemented, to an annual requirement to reduce the carbon intensity of most fuels, in particular by requiring Canadian refineries to produce gasoline that emits 10 to 12% less carbon by 2022. This measure is criticized by the leader of the opposition, Andrew Scheer, who promises to repeal this “secret tax” if he is elected, in addition to the “carbon tax”.

5. However, his popularity was affected by a controversial trip to India and, in Quebec, by his refusal to undertake a challenge against Quebec’s law in court on the secularism of the State

In India, Justin Trudeau pursued a foreign policy opposed to the direct use of military force and favorable to action within the framework of the UN and peacekeepers. One of its first decisions in this area is the end of the Canadian strikes against the Islamic State (IS) in Syria and Iraq, declaring that it wishes to focus its efforts on training local troops to fight the jihadists. It also defends development aid.

Its international policy is regularly the object of criticism and accusation of amateurism. In terms of diplomacy, Carleton University awarded him a grade of C-27 in March 2019. In February 2018, he caused a diplomatic incident during a stay in India by inviting an extremist separatist Sikh to a reception; he is also criticized and mocked when he puts on a different traditional Indian dress every day.

Justin Trudeau rallied in 2006, under Stephen Harper’s government, to a form of recognition of Quebec by accepting the Harper government’s proposal to recognize the Quebec nation as “a nation within a united Canada ”.

In 2017, Justin Trudeau refused the invitation launched by the Liberal government of Quebec and its Prime Minister Philippe Couillard to reopen the constitutional question in Canada. In 2018, he asserted that the presence of a separatist movement in a country, including Canada, can constitute a risk of violence.

In his approach to Canadian federalism, he says he wanted to work with the provinces in a spirit of consultation and co-management. It mainly suggests a federalism of reconciliation and a return to the federal spirit.

In May 2021, he mentioned the existence of a Quebec nation. But at the end of his term, relations between the federal government and several provinces deteriorated sharply, in particular due to financial issues as well as several infrastructure and environmental projects

In February 2019, Trudeau was accused of having pressured the Minister of Justice, Jody Wilson-Raybould, to end the prosecution of the SNC-Lavalin group, implicated in corruption scandals.

On the occasion of Fidel Castro’s death in November 2016, Justin Trudeau issued a press release that provoked strong political reactions.

Contract awarded to We Charity

In the summer of 2020, Justin Trudeau is again the subject of a controversy over his ethics, when it is revealed that he contributed to the award of an important government contract to an association that paid his wife, mother, and brother some $ 300,000.

He accepted trips offered and paid for with private money

In January 2017, the Conflict of Interest and Ethics Commissioner investigated vacations offered by Karim Aga Khan IV to Trudeau, which he accepted while the trips offered and paid for with private money from others are forbidden to elected officials.

In early June 2018, CBC uncovered an old story of sexual misconduct on a journalist working for a national newspaper

Eighteen years later, Justin Trudeau said he remembered the trip very well, but had no recollection of having had a “negative interaction” with anyone that day. Asked in January 2018 by a CBC journalist, in a television interview, Justin Trudeau said that there is no context that could exonerate a person from responsibility for acts committed in the past.

In September 2019, Time released two youth photos of Trudeau in which he wore a brownface and a blackface respectively, while Global News published a video in which he was also made up in black. Trudeau apologized for what he presented as youthful mistakes. Conservative leader Andrew Scheer claimed his campaign team sent the video to Global News.

6 Ways You Can Be Accused of Financial Fraud