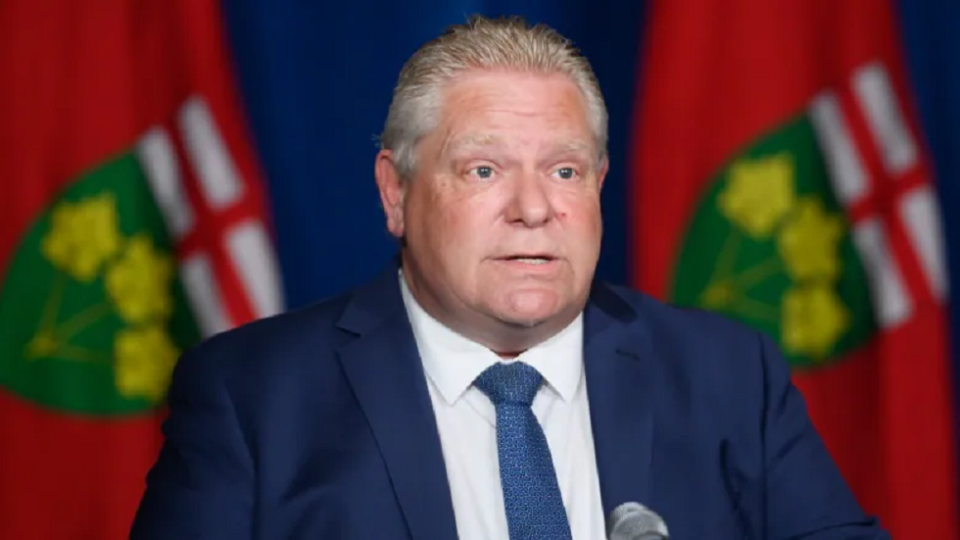 Doug Ford is the Premier of Ontario. He was elected MLA for Etobicoke North in 2018.

From 2010 to 2014, Doug Ford was a Toronto city councilor. In that role, he served as Vice-Chair of the Budget Committee and worked tirelessly to save Toronto taxpayers hundreds of millions of dollars in savings. While on the city council, Doug Ford served on the Build Toronto and Canadian National Expo boards. He has also served on the Public Appointments Committee and the Government Management Committee. Let’s find out more about this famous Canadian politician.

Doug Ford: All You Need to Know

What is Doug Ford’s background?

Committed community leader, accomplished businessman at the helm of Deco Labels and passionate defender of the interests of the population, Doug Ford comes from a family that has public service at heart and is dedicated to the people of Ontario, with three generations of elected officials.

Where is Doug Ford?

This question has been making rounds for weeks over the internet. At a press conference, Doug Ford defended not having been present during the last eight days, claiming to have been “on the phone all day from 7 am”, every day. “The only difference is, I wasn’t at Queen’s Park.”

Did Doug Ford get COVID-19?

Doug Ford went into administrative segregation on April 21, when a member of his team with whom he had been in close contact was diagnosed with COVID-19.

Even though his own result was negative, Doug Ford said he would follow Toronto’s public health recommendations to the letter and isolate himself at his late mother’s home in Etobicoke.

The next day, he held a virtual press conference where he apologized, moved, to the population for his controversial decisions, including the closure of children’s parks and the power offered to the police to carry out random checks to ensure that residents do not leave their homes for reasons deemed non-essential.

How did the public react to Doug Ford’s press conference?

Nonetheless, criticism arose in the days following this mea culpa, because it was followed by an absence of additional support offered to the population, in particular a provincial program of paid sick days.

His government announced such a program on Wednesday, more than 400 days after declaring Ontario’s first state of health emergency, requested since day one of the pandemic by opposition parties and public health experts.

The only public intervention by Doug Ford happened when he asked, online, the government of Justin Trudeau to stop all non-essential travel to Canada, fearing the worrying new variants of COVID-19.

What did Doug Ford say about Canada’s borders?

At his press conference on Friday, the leader of the Progressive Conservative Party of Ontario reiterated its demand for the federal government to close land borders and said that if he was in charge, he would prevent ” all flights to Pearson Airport ”.

Doug Ford also repeated his demand in Ottawa for a hotel quarantine for overland travel, arguing that too many travelers are taking a cab to avoid complying with public health measures.

Doug Ford has not made any announcements related to strengthening or loosening restrictions and public health measures in Ontario.

Where does Doug Ford live?

Doug Ford is a long-time member of the Etobicoke community, where he resides with his wife Karla and their four daughters. His experience is a testament to his commitment to public service: he has worked for over 20 years with the Rotary Club of Toronto West and is proud to be a member of the Royal Canadian Legion.

Why has Doug Ford maintained a low profile?

Much has happened in Ontario since Doug Ford’s last public intervention. On Tuesday, a team of nine health professionals from Newfoundland and Labrador arrived in Toronto, responding to a call for help from Doug Ford the previous week. The Ontario premier has not publicly thanked them or made any public comment about them.

The province said it will grant workers up to three days of paid sick leave. A bill was adopted﻿ ﻿in this sense, the Progressive Conservative government opposed it since last year. Despite the arrival of this long-debated event, again,  Doug Ford abstained from commenting.

What rumours were circulated by Doug Ford’s absence?

The hashtags # WheresDoug ( where Doug is ) and # WheresDougFord went completely viral on Twitter, as Ontarians shared increasingly wacky theories about why Doug Ford didn’t appear in public since April 22.

When there is a politician who has been so much in the public eye for a year with almost daily press briefings, disappearing without explaining why is going to give rise to a series of hypotheses, said Peter Graefe, science professor politics at McMaster University.

Peter Graefe cited an example of a rumor shared on social media by Independent MP Randy Hillier, which seems to suggest, without evidence, that Doug Ford is in poor health following his vaccination.

According to the political scientist, others will undoubtedly say that there is discontent within the Conservative Party caucus and that Mr. Ford is fighting for his political survival, or still others will attribute his absence to Doug’s wish.

For Geneviève Tellier, a lack of transparency from the Ontario government on Doug Ford’s situation would only fuel rumors.

We do not know for how long he will isolate himself, we do not know when the end of the isolation will come, and so that adds a little to the mystery

Did Doug Ford open the door to his successor?

According to Tellier, the unforeseen and prolonged absence of Doug Ford has given the ministers of health and finance the opportunity to take greater positions as leading figures in Ontario’s Progressive Conservative government.

Christine Elliott and Peter Bethlenfalvy put on a good figure and are capable of dealing with the press. “I am not surprised for Ms. Elliott, who is a seasoned politician and who had also run for the leadership of the Conservative Party”, says Geneviève Tellier.

Could this harm Doug Ford? It would be too early to talk about a behind-the-scenes power game, the political scientist says, but the question of who might replace Ford is starting to be answered.

Ms. Tellier says that the bottom line for Doug Ford is to assume his leadership and show his party that he is the man for the job, and that means being popular with the population and making good decisions.

As for McMaster political scientist Peter Graefe, he spoke about the numerous media leaks in recent months that have called into question Doug Ford’s ability to manage his caucus.

There, perhaps that will be the challenge on his return: to regain not only the confidence of Ontarians but especially that of his caucus and his Council of Ministers.

Justin Trudeau: 7 Intriguing Insights Into His Life and Career!

You Know You Want to Pop the Question, But What About the Ring?