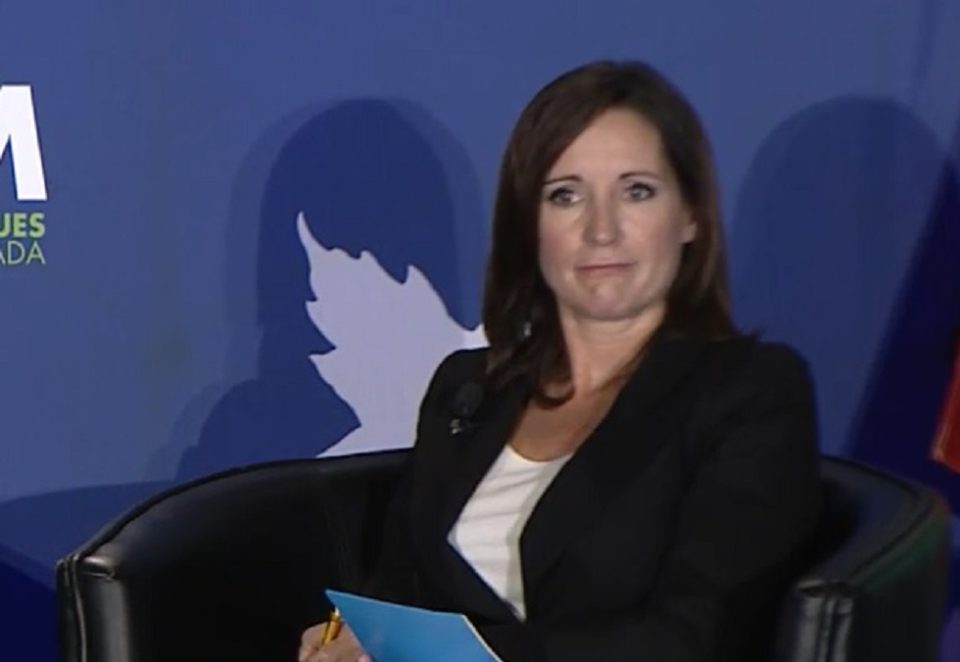 Canadian business journalist, Amanda Lang is currently employed by BNN Bloomberg. Prior to that, she was the host of Bloomberg North on Bloomberg TV Canada. The journalist was working as a senior business correspondent for CBC News, where she anchored The Exchange with Amanda Lang daily on CBC News Network. One of her earliest jobs was as a print journalist for Canadian national newspapers and was an anchor for CNNfn and BNN.

Lang has an identical twin sister, Adrian and they were both born on 31 October 1970.

She was born to Otto Lang, a Liberal party MP and federal cabinet member during the 1960s and 1970s.

Amanda Lang and her twin went to St Mary’s Academy, a private Catholic girls’ school in Winnipeg, Manitoba. Amanda would go on to study architecture at the University of Manitoba.

Her journalism career took off in print at The Globe and Mail in the InfoGlobe unit. Then she joined the New York correspondent for the National Post (after it acquired the Financial Post).

Her television began as an anchor and reporter with CNN. She was living in New York City where she reported from the New York Stock Exchange for American Morning, and anchored programs on CNN’s then-financial network, CNNfn. As Peter Mansbridge’s successor on The National,  the then 42-year-old Lang made Toronto Life’s 2012 ’50 Most Influential People in Toronto’ annual list.

Shifting back to Canada, she became an anchor for Business News Network and was the presenter of both SqueezePlay and The Commodities Report.

Lang would go on to leave SqueezePlay and BNN in July 2009 and in the same year, Lang and Kevin O’Leary began anchoring The Lang & O’Leary Exchange.

At the time, this was a new business program on CBC News Network airing weekdays, on which she has interviewed people such as Brian Mulroney, former prime minister of Canada.

On 13 October 2015, CBC announced Lang was leaving the broadcaster effective 16 October for what was described as “a new opportunity outside the CBC in television.”

It was later that year she became a host of Bloomberg TV Canada’s Bloomberg North. Following the September 2017 winddown of the network, Bell Media recruited Lang once again for Business News Network (which had announced that it would become a co-branded franchise of Bloomberg Television, BNN Bloomberg), where she now co-hosts Bloomberg Markets as part of a co-production arrangement for the program.

Controversies about her career and brother:

In 2011, Lang was anchoring a panel on CBC’s The National where she was assigned to determine the credibility of then NDP leader Jack Layton’s election platform. What she forgot to disclose to the viewing audience at that time was that Lang’s brother was running against Layton for the Liberal Party in the riding of Toronto—Danforth.

CBC’s Ombudsman ruled in July 2011 that “it was not possible to compartmentalize Lang’s reporting on NDP policy from Layton’s qualities as a leader and credentials to be supported as a candidate. Any of her campaign reporting even indirectly intersecting with the Liberals or NDP could have been perceived as conflicted.”

Media website Canadaland presented evidence in 2014 that in 2013 Lang had provided favorable CBC coverage to two companies, Manulife and Sun Life, without disclosing to viewers that each company had recently endorsed her for speaking engagements.

In January 2015, Canadaland showed stories revealing that Lang participated in the coverage of the Royal Bank of Canada during its temporary foreign worker program scandal, including interviewing the then-CEO of the bank Gord Nixon, while having done speaking engagements at RBC sponsored events, promoting her own book, which featured a back cover endorsement from Nixon without disclosing she was in a relationship with a board member of the bank.

Following the RBC stories, George Monbiot who was a columnist for The Guardian, wrote on 20 January 2015, “It amazes me that [Lang] remains employed by CBC.” John Doyle, a columnist for the Toronto The Globe and Mail, wrote on 23 January “It’s time for Lang to get down off her high horse and go away. This is about the CBC’s reputation, not hers, which is already in tatters.”

On 22 January 2015, the CBC announced it had banned on-air talent from accepting endorsement speaking engagements. Later that day, Lang admitted in a piece in The Globe and Mail that she should have made on-air disclosures about her connection to RBC and stated that she was on board with the speaking engagement ban.

On 5 March 2015, the CBC announced an internal report conducted by one of its own news employees had determined Lang met its journalistic standards. However, in a letter to CBC, some viewers complained about Lang’s alleged RBC conflicts of interest.

CBC News General Manager Jennifer McGuire stated that the CBC did not disclose all of the reports on Lang to the public, including the parts concerning Lang’s alleged conflicts of interest regarding her personal life:

“Let me state out front that only a small portion of that review was made public: analysis of the content that we broadcast and published. Other sections which cover the equally important questions about conflict of interest were not released because of obligations we have to keep them confidential … Any discipline carried out in accordance with that collective agreement is also confidential.”

Toronto’s NOW Magazine reported on 16 January 2015, that Lang “came to the defence” of Barrick Gold, a mining company that had employed her ex-husband, in an on-air CBC segment.