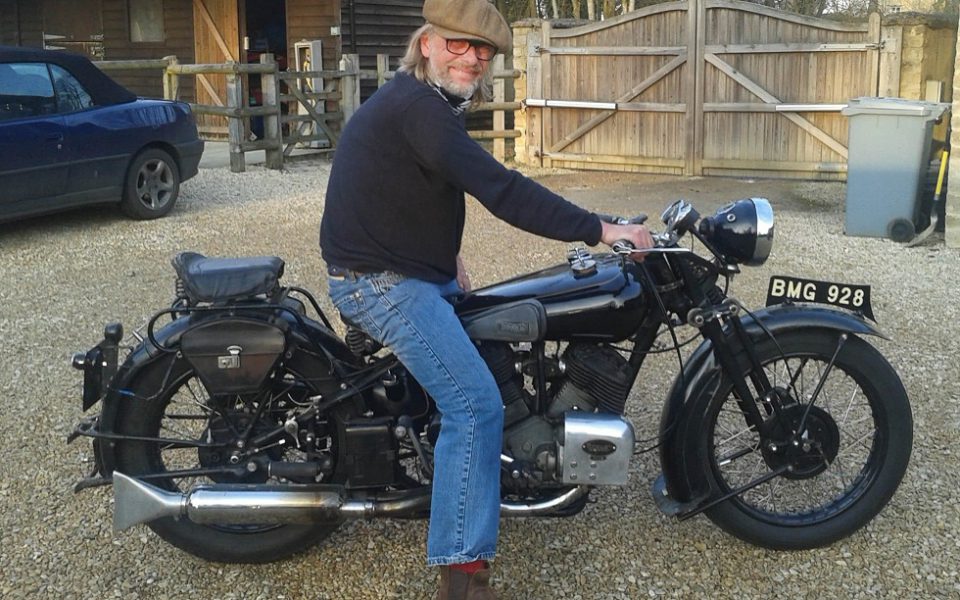 The wind is in your hair, the sound of rock and roll plays in your mind, cut to a man on a motorcycle – it was Henry Cole on TV the whole time! That’s right, the man who can transport you around the world from your living room is most famous for being on the World’s Greatest Motorcycle Rides on the Travel Channel Worldwide, and for being one of the best motorcycle enthusiasts today. But did you know that it all began when he was a young teen at a shed?

Today, Henry is the most recognisable name for hosting a number of popular motorcycle-centric television shows, including The World’s Greatest Motorcycle Rides and The Motorbike Show and Shed, a renovation show following the quest to uncover vintage vehicles hidden in Britain’s shed. The show digs up gems and is co-hosted by Sam Lovegrove, plus when you’ve got someone like Henry on your team, you are bound to come across a few real gems. More recently Henry was featured on TheMissendenFlyer on Youtube, under When Henry Met Andy. If his life seems like a rollercoaster of activities, get ready for this:  “I started life as a session drummer, then I became a news cameraman, then I went on the road for years with rock ‘n’ roll bands, then I directed a movie about heroin addiction based on my life, because I was a heroin addict for five years.

If that intro wasn’t shocking enough, here are 11 facts you never knew about the passionate biker:

Who is Henry Cole?

What is Henry Cole’s favourite bike?

During the renovation show to uncover vintage vehicles hidden in Britain’s sheds, Henry gave us a huge hint by saying:

“My favourite find of all time is my Quartermaster drag bike from the 1960s. I go into this shed with Sam and in the corner we see this thing that just looks like a torpedo. It’s a T100 Triumph with a supercharger on it running on methanol. We completely rebuilt it and I’ve got an eighth of a mile record of about 100 miles an hour at Elvington [on it]. I think I can get it up to about 130mph. As shed-finds go, that’s one of the best we’ve found.”

He’s the owner of Gladstone Motorcycles:

Continuing in the grand tradition of Métisse, Norton and Triumph, Henry established Gladstone Motorcycles with Guy Willison in 2013. With a tagline that reads: ‘Handmade British motorcycles for discerning hooligans’, it is obvious that Gladstone is not your ordinary CEO.

“We are creating what we believe to be beautiful bobbers. What we are desperately trying to do is our microscopic part of continuing that passion for British engineering, British styling. We love it. We live for designing a bike that is aesthetically pleasing.”

Henry Cole is proud to be British:

Perhaps it is symptomatic of his bloodline and his quintessentially English upbringing, but Henry has an undeniable passion for motorbikes from the motherland.

“I’ve always had a thing about British, as well. I’m so proud to be British and to promote the

Great British craftsmen and women we’ve got in this country.”

When Gladstone came along, it was the first bespoke British manufacturer to be established since 1984. Henry and Guy had developed, designed and built a restyling of Norton’s Commando 961 Street with a limited edition run of 50 models – every one of which sold out before the launch. Enjoying this kind of success, did Henry think Gladstone fares as a classic British marque?

“We don’t think we’re anywhere close to being an iconic British brand, but one day… You know, when I’m dead and gone one might come up at Bonhams and someone might pay some decent money for it and I’ll roll around in my grave and go, ‘I told you so!’”

He is married with 2 kids:

Henry Cole lives in the Cotswolds.

In addition to loving his motorcycles, Henry is passionate about fishing, classic tractors, cycling and most importantly his wife Janie and his two sons Charlie and Tom! Aw!

Henry Cole has a bike for every mood:

“I spend a huge amount of my time on a motorcycle on my own. And the reason why I have a whole collection of motorcycles is because I ride different bikes and I ride them for different moods. My mood is relative to the conversation I have with my bike.

“I have a lovely little Norton ES2 called Mavis. Mavis and I go for our little spiritually relaxing rides around the Cotswolds. I don’t take Mavis more than three or four hundred miles. But I have a very different conversation with her than I do with my American chopper!

“Even though they are obviously bits of metal, you have an affinity with a motorcycle. It is strange but I do talk to my bikes and I will continue to do so.”

His ancestry is very posh:

According to Henry, his heritage came at a price. Henry is descended from William Ewart Gladstone, former Prime Minister of Great Britain, and was educated at Eton College. And yet, the trajectory of his life has more to do with riding on desert racers and bobbers than riding on coattails. The man is more horsepower than executive chancellor!

As to his upbringing he says, “I knew there was love, but it was masked by the stiff upper lip attitude of an army major father. I lived in a great Rectory in Norfolk with 14 bedrooms, me, a dog and mum and dad, and I wore a little tweed jacket and went to prep school…

“I grew up in what I can only describe as a posh world. I was subjected to a load of very eccentric people in tweed – my relations. One of whom was my uncle Dick Redbeard. He was this raving, wonderfully eccentric old bloke who lived up in Liverpool. He came outside one day and he goes: ‘Do you want to come and have a look in my shed?’ It was the smell that hit me first: old oil and a bit of leather.”

Little did he know, but that first visit to his uncle’s shed was a watershed moment. What he discovered there would resonate for the rest of his life. Henry remembers seeing around 10 British bikes, including a BSA and perhaps a Triumph.

“Immediately in that shed I kind of felt at home. I felt as if I could hide away and there were these things in there which had absolutely nothing to do with that society that I had been brought up into. That was the instigation of my love of classic bikes, restoration and an alternative lifestyle of shed running.”

He used to rebel a lot when he was young:

You would be correct to think that Henry Cole has spent a great deal of his energy rebelling against a vision of society he inherited – a vision of aristocracy and elitism with which he never seemed comfortable.

So it’s safe to say that Eton and his ‘stifling upbringing’ fuelled his rebellion. “It all went slightly wrong at Eton when I started smoking weed.”

In his hard-hitting memoir – A Biker’s Life: Misadventures on (and off) Two Wheels, Henry discusses his life:

It’s a searingly honest account. “I felt I had a story to tell of people who have lost their way in life and didn’t really know what they were rebelling against but demanded in some way, however small, to be an individual. Motorcycling is an intrinsic part of that ethos.”

Henry Cole and his drug addiction:

He is very public about his battle with Heroin addiction between the ages of 19 and 24. He is now 28 years clean but still is heavily involved in trying to help other addicts and share his experience in battling addiction. Several friends have died from drugs.

“It’s an incredibly lonely place being an addict. You can’t actually share your life with anyone else apart from other junkies.

“It took me a long time to realise there is more to life than tin foil and heroin, genuinely – because I didn’t understand what life was all about.” Now, he says, life is about ‘contentment.’

In 2013, Henry was at Bonneville Salts Flats attempting a world land speed record for a vintage bike:

“I went and set that record. You don’t need to be a rich kid to do that. You just have to be a person with a little bit of pride and ambition.

“I did a TV show on it, and couldn’t help myself collapsing in tears because 25 years before that day I was on £250 of heroin every day, my company was bust and I tried to kill myself twice. You know, there is hope in that, and if someone gets a little bit of that message, then there’s a reason to write this book.”

He will always pick a bike over a car:

“Motorcycling, to me, has become a hobby. If we really looked at it, it could become incredibly utilitarian. People would use it. If only we weren’t taxed. Why aren’t there incentives to get people out of their cars to commute on motorcycles and scooters in London?

“If you’re in a car, you’re comforted by your airbag and all that kind of stuff. If you’re cold you put the heating on, if you’re hungry you have a wine gum, if you fart you wind the window down. But you’re still the spectator. You’re looking out at that windscreen at what’s going on. As a motorcyclist you are taking part in that scenery, you are part of that scenery. And also you are an individual on a motorbike.

“It’s not about making a statement and showing off in your Ferrari and all that kind of b*****ks. It’s about you at one with the road and living life how you want to live it and that’s why I ride a bike. Period.”

Top Gear, it looks like you’ve got some competition of opinion from Henry Cole!

Ynés Mexia: Many Don’t Realize How Much We Owe To This Botanist