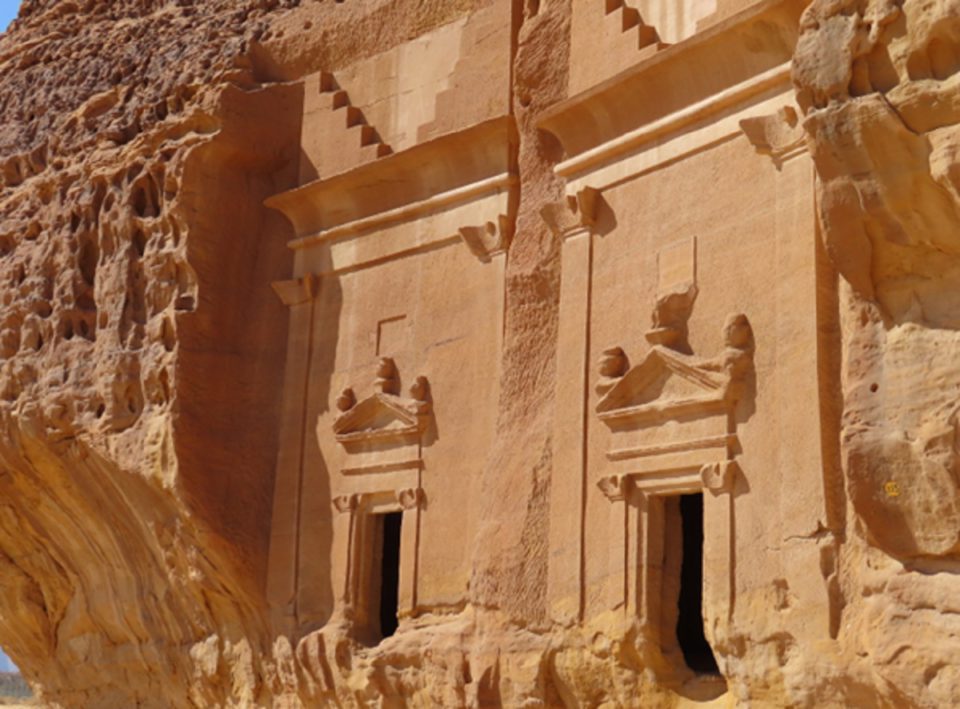 Bordered by the Persian Gulf, the Arabian Peninsula is growing into a popular tourism hub. But while many travelers associate the area with the extravagance of opulent emirate cities like Dubai and Qatar, the peninsula also boasts a vibrant culture going back millennia. Here are four heritage sites to check out in the Arabian Peninsula.

Picture a dramatic stone city from late antiquity emerging from rugged desert canyons. Poking out of the sands, the ancient site of Hegra is one of the most stunning archaeological wonders in the Arabian Peninsula. Hegra, or Mada’in Salih, was even the first UNESCO World Heritage Site in Saudi Arabia.

The site was erected by the Nabatean civilization and was their second biggest city after Petra. Contrary to its world-famous sister city, though, crowds of tourists have not yet put the ruins on their map. Foreign visitors have only recently been granted access to these majestic remains since tourism is slowly developing in the kingdom. So, history buffs looking for an off-the-beaten-track adventure might as well head to Hegra to marvel at hundreds of intriguing rock-carved tombs and inscriptions before word gets out.

On the eastern tip of the peninsula, the Sultanate of Oman has developed a distinctive culture blending Arabic, Persian, and Swahili influences. A stroll through the lively streets of Muscat is enough to feel these multicultural roots. But one of Oman’s most impressive historical monuments lies further south of the capital.

A World Heritage Site since 1987, the Bahla Fort was built from the 12th to the 15th century by the Banu Nabhan tribe. This fortified oasis settlement is a prime example of medieval Islamic architecture. After decades of questionable plans to make the site look new, Bahla eventually underwent extensive restoration efforts to preserve its integrity and reopened in 2021. History buffs might want to hire a guide, however, as the site lacks exhibits. Visitors can also freely explore the adjacent Friday Mosque before soaking up the sights of the modern settlement of Bahla.

Dubai often makes headlines for its bold architectural projects. From the world’s tallest skyscraper to spectacular artificial islands, the flagship tourist city of the UAE seems a futurist’s wet dream. But Dubai is more than glamorous hotels and luxurious shopping malls. And the capital of the Dubai Emirate also boasts a historical side.

Southeast of central Dubai, the Hatta Heritage Village celebrates the emirate’s past. Located in a lush valley among the Hajar mountains, the village is a faithful reconstruction of a traditional rural settlement. Visitors stroll through mud and stone huts overlooked by forts and citadels, where they can get familiar with age-old customs thanks to weaponry, pottery, and jewelry displays. The Folklore House introduces them to poetry and musical instruments. And this heritage village also caters to families with kids-friendly traditional games and swings.

Al Balad is the historic center of Saudi Arabia’s second-largest city, Jeddah. This World Heritage Site dates back to the 7th century. And the best way to visit is to wander off its narrow back alleys, discovering 500-year-old buildings and enticing souks. Some of Jeddah’s prime landmarks include the above-water mosque of Al-Rahmah, the 13th century Al-Shafi’i Mosque, and the intricate limestone coral gateway of the Makkah Gate. Excluding Mecca and Medina, which are inaccessible to non-Muslims, Jeddah is further considered the cultural hub of Saudi Arabia. The city plays host to several art events, such as the Jeddah Season and the Red Sea International Film Festival.

From planetariums to aquariums and theme parks, Jeddah also bets on entertainment to become one of the leading resort cities in the Gulf. However, casinos are yet to open as gambling is outlawed throughout the region. Still, avid players can turn to online casinos in Saudi Arabia. Expert reviewers have tested every site to find the most trustworthy platforms. Top gambling sites feature all the best casino games like video poker, baccarat, or roulette. And Arabian gamblers needn’t worry as all reliable platforms boast safe payment methods and tight security measures that protect their anonymity.

So, are you looking for somewhere original to plan your next trip abroad? The Arabian Peninsula claims many off-the-radar heritage sites, from untouched ruins to lively villages.

Where Should You Put Down Roots on the Lake Ontario Shoreside?