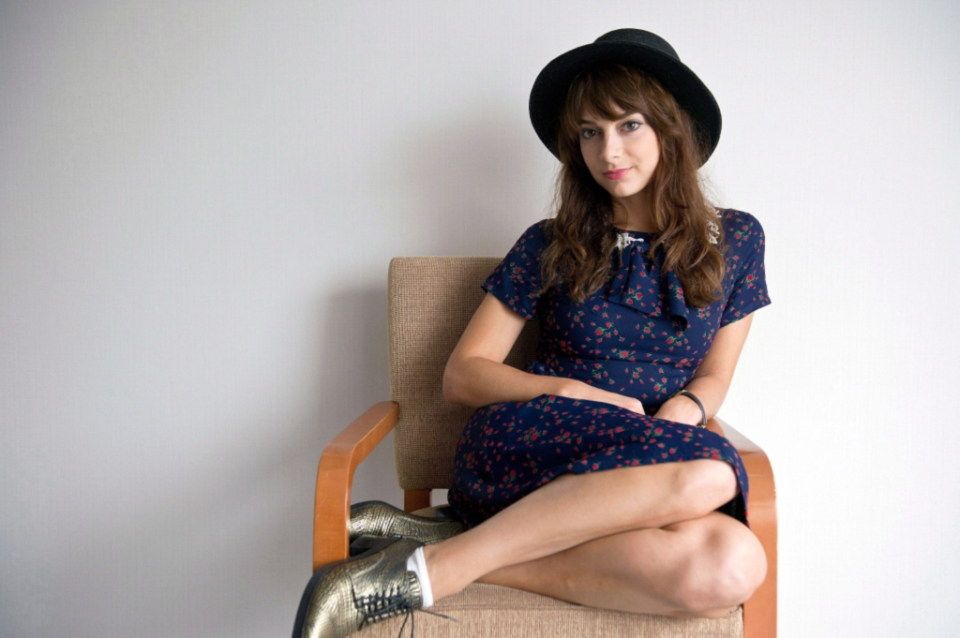 Quebec actress Sophie Desmarais wished to be a photographer, hairdresser, or novelist before heading to films. She started at the Option-Théâtre at Collège Lionel-Groulx, then got her first role in We Were Free in 2004 alongside Penélope Cruz and Charlize Theron. She then went on to play supporting roles in several productions, notably from her native Canada (the dramatic comedy Le Grand Départ, the historical drama Polytechnique, Les Amours Imaginaires by Xavier Dolan, etc.). After the short film Still Life in 2010, the filmmaker Chloé Robichaud offered Sophie Desmarais her first leading role in a feature film with Sarah Prefers To Run in 2014, and for which the actress received the award for best hope at the Festival du Canadian film from Dieppe. Interpreting a young middle-distance running athlete, the actress actually trained for six months in this sport for the occasion. Along with her film career, Sophie Desmarais also plays on stage where she has already performed two roles in plays by Molière: L’Avare and L’Ecole des femmes. Here are some personal facts about how she began acting, how her family history is confusing on the internet, and more!

1. Early life and childhood in Terrebonne:

The actress grew up in Terrebonne, in a suburban atmosphere and says: “I am an only child. My parents do not evolve in the artistic world; they are very normal people. And great partners who are always together”.

As a child, the actress was very athletic and watched a lot of movies like The Champion or The Karate Kid. The actress said something profound about the screen: “Thinking about it, I realize that it was not so much the sporting aspect that fascinated me, but the heroes. I was pretty lonely and lived in a neighborhood where there were only adults. The significant encounters I made during my childhood were therefore with film characters”.

2. Her family was misrepresented online:

If you type the name of actress Sophie Desmarais on the internet, you may learn that she is the daughter of Paul Desmarais, that her mother’s first name is Jacqueline, that André and Paul are her two brothers. Except that is wrong. Very wrong. Sophie didn’t grow up in Westmount or Sagard, but in Terrebonne. She is the only daughter of Alain Desmarais, foreman in a printing plant, and of Jocelyne Giguère, who made a career at Bell. The actress closed her Facebook account and ditched social media to no longer have to read that she owed her acting career to the Desmarais Empire.

The actress says she would have killed to be Doctor March’s fifth daughter.

“I also loved period films and characters from faraway lands. I carefully observed the heroines I liked, I imitated their gestures, their attitudes, I dressed like them, I read the same books… I was a sponge. I had the impression of not having a personality, of being an amalgamation of characters.

“My idols were Christina Ricci – I found her weird and intriguing!, Jeanne Moreau, and Nicole Kidman in Moulin Rouge! I was deeply influenced by the film Romeo and Juliet, with Claire Danes and Leonardo DiCaprio. After seeing it, I didn’t eat or sleep for days. This movie made me high. Even today, I’m looking for those experiences, those encounters that make you high.

“I didn’t want to be an actress. It scared me. I was afraid that the actors would become the ones they play, that they could no longer be themselves. I found this job dangerous. I wanted to be a hairdresser, then a photographer, and finally a novelist. Shadow trades. ”

4. The ugly duckling became a star and it scared her:

She says in one interview: “I dragged a small notebook everywhere with me; I wrote everything down. I wore big glasses with thick lenses like bottle bottoms, striped sweaters, and orange pants. I was a little ugly, but I loved it. I felt mystical and marginal. I felt like I was lifting myself up, focusing on the essentials, on my soul. Oddly enough, I was really good about myself. I loved my status as a strange little girl”.

But then one day, she took off my big glasses and put on contact lenses.

“My life changed. Suddenly I was told I was beautiful. It traumatized me. Overnight, I wanted to be the most beautiful. I started to buy clothes instead of books. I got lost in this desire to please. It was the theater that finally brought me back to me. ”

5. The birth of an actress:

“As a teenager, I went to a girls’ college, a little Catholic. I had a great fascination with devotion. I kept this interest in acting till I was in college”, says the Canadian actress.

My French teacher wanted us to put on a Molière play, recalled the actress of her childhood. “Nobody wanted to play the role of Dom Juan… So, I volunteered. By dressing up, I had a revelation. I felt in the right place, in control. The theater allowed me to discover something bigger than myself. It was my way of touching God”, continued Sophie.

6. The dizziness of fame and celebrity status:

When the actress had the immense chance to go to the Cannes Film Festival to present two films in 2015, what impressed her were the meetings with the great actors and the great filmmakers.

But the buzz of the red carpet was another ball game because the actress says: As for the photos, once you understand the staging, you just have to play your part, and it becomes easy. It made me laugh that photographers shouted my name to take a picture of me… They had probably learned it by heart and had no idea who I was and what I had done!”, she said.

What moved the actress more, on the other hand, was the climb up the steps of the Palace, the crowd who applauded her after the film and the sea in the background…but the return was difficult for Sophie Desmarais as she says: “People recognized me in the street and congratulated me. I was very afraid of the expectations I had created. It’s very hard for me to live constantly in the eyes of others, even if it’s part of my job as an actress. I need to distance myself, to move away so as not to feel “diluted”.

“The image of me that is conveyed in the media is like a double. A much more glamorous twin. I am learning to tame this aspect” The actress also says that the last thing she wanted in life was to be famous as she never chose this profession to be seen.

“I dreamed more of poetry than of fame”, sighed the celebrity.

Sophie Desmarais owes her resplendent career on the big screen – 17 feature films, 11 short films in just seven years – only to herself. It is certainly not her contacts (non-existent) in the medium that propelled her to the screen and on the stages of the theaters, but very probably her talent, her rigor, and her youth who, upon leaving school, made her a natural candidate to play the rebellious teenagers.

Two months after her graduation in 2007, she got her first role in Claude Meunier’s Le grand Départ where she played the rebellious teenager of Marc Messier. Quickly, roles and contracts followed one another and the actress explained it saying: “I auditioned a lot and didn’t always get the parts, but I think what worked a lot in my favor was that at 20 I looked a lot younger than my age. I was one step ahead of my casting “

Still, on the big screen, Sophie Desmarais shines – whether she is in the shoes of a runner with ambiguous sexuality ( Sarah prefers running ), whether she is decked out in garish wigs at the back of a country bowling alley ( Curling ), whether she is a junkie ( Discharge ) or she plays Anna Karina ( Abbittibbi’s Godard Hunt ), the camera loves her madly and she gives it back.

Since her diploma, she has performed on stage as well, in about fifteen pieces, both by Molière and Sarah Berthiaume, and she intends to continue.

8. She was compared to Pascale Bussières:

During the 90s, Pascale Bussières was in practically all Quebec films, her face like the blank page on which an era was written. So it is with Sophie Desmarais for the 2000s.

“It flatters me a lot that I am compared to Pascale Bussières, who is an actress that I admire so much; at the same time, this exhibition that I know at the moment scares me a little. By nature, I am rather discreet and I worried at one point that I was getting tired of me, but hey, I mostly do independent films and hardly any TV, except for Yamaska and In therapy on TV5 where I play a character that I adore, so this exhibition is not that bad and, above all, it allows me to earn my living. ”

​​Sophie played a prostitute junkie. “It was a springboard film, which revealed my complexity as an actress,” she says.

“For the happiness of working with Denis Côté, of being part of his very special cinema and of being able to change the wig in each scene”, says the one who played the very colorful attendant of a bowling alley.

The role that brought her to Cannes and opened the doors to the international scene. Since Sarah, Sophie has an agent in France and another in the United States.

She plays a kind of Anna Karina and the character that most resembles her in life.

The first time that Sophie filmed in both French and English, a toxic love story between a student and her teacher (Andreas Apergis).

10. An interest in an international career:

The actress says that France has always attracted her, but also says she has nothing to envy the French.

“When you leave Quebec, you realize that it’s really hot what’s happening here culturally. Right now, saying that you come from Montreal when you are abroad is like saying that you come from Berlin: it is very well received. My desire to go and work in France or the United States reflects above all a desire to discover other ways of working, to meet new people, to play in another language”.