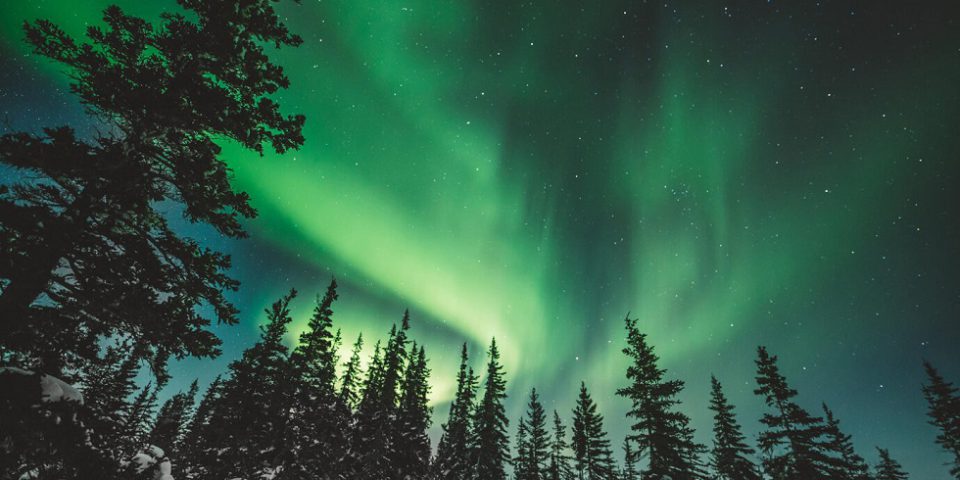 The northern lights are actually a pretty magical experience, seeing the bright green and reds dancing across the black canvas of the night sky. This phenomenon is caused by a collision between gaseous particles in the Earth’s atmosphere with charged particles from the sun’s atmosphere. But do you have to travel far to see it? Not in Canada because you can catch them in every province. The only caveat- you really need a dark and clear night sky for aurora activity. Here are 8 locations to see the breathtaking event!

The Great White North is one of the best places in the world to admire Mother Nature’s light show during the winter months. Those who head to Yukon will even see the northern lights more than once.

This prime location is just a short distance away from the city of Whitehorse’s light pollution, and you can see stunning displays from a number of rental lodges and retreats.

Head into the wilderness of Northern Saskatchewan’s prairies, and you’ll find some of North America’s darkest skies. You can catch a number of tours that start from the town of La Ronge, which is in the same vicinity as some of the world’s best fly-in ice fishing lodges.

The northern reaches of British Columbia happen to be a priceless backdrop thanks to its northern latitudes and minimal light pollution, many provinces in Canada such as  British Columbia treat you to the aurora borealis that reflects off the calm waters of Muncho Lake year-round, and the Muncho Lake Provincial Park is a cozy haven for a viewing trip in any season.

Fort McMurray can be found on the 56th parallel, which is underneath the auroral zone, where most auroras occur. For this reason, Fort McMurray is a hotspot for finding quality lights tours and expeditions.

You May Like: Northern Lights, the Most Spectacular Sight in the World!

Catch a glimpse of the northern lights in Canada in an Arctic fashion!

Those willing to brave the cold can be rewarded with the sights of the archipelago of Nunavut. Iqaluit is the capital of this Canadian territory, but little to no tourist infrastructure exists- which can be a huge plus for those who want  to be adventurous!

The lack of light pollution and the opportunity to find your own way make Iqaluit a special place for an aurora borealis adventure.

The eastern neighbor of Canada’s Yukon is the Northwest Territories.

Photographers and adventures are in luck- this area has a high 90-percent chance of seeing the northern lights in this less populated province during the winter months.

The charming Battle Harbour can be used as your home base for northern lights in Canada.

Road trip adventures, photography and selfies await thanks to the aurora borealis behind the village’s historic buildings. This carefully restored fishing station is only open from June to September, but it’s northern location and minimal light pollution means you’ll likely find what you’re seeking during those months.

Take a trip along the northernmost highway in Canada, and you’ll find yourself pulling over in the evening hours to admire some of the most spectacular aurora borealis displays in the country.

A terrifyingly adventurous road awaits those who want to experience these dangerous roads which wind into the Arctic Circle. As this is very adventurous, traveling with a tour guide is recommended during the snowy seasons.

21 Quick Things To Do In Hamilton

10 Reasons to Visit the Lakshadweep Islands