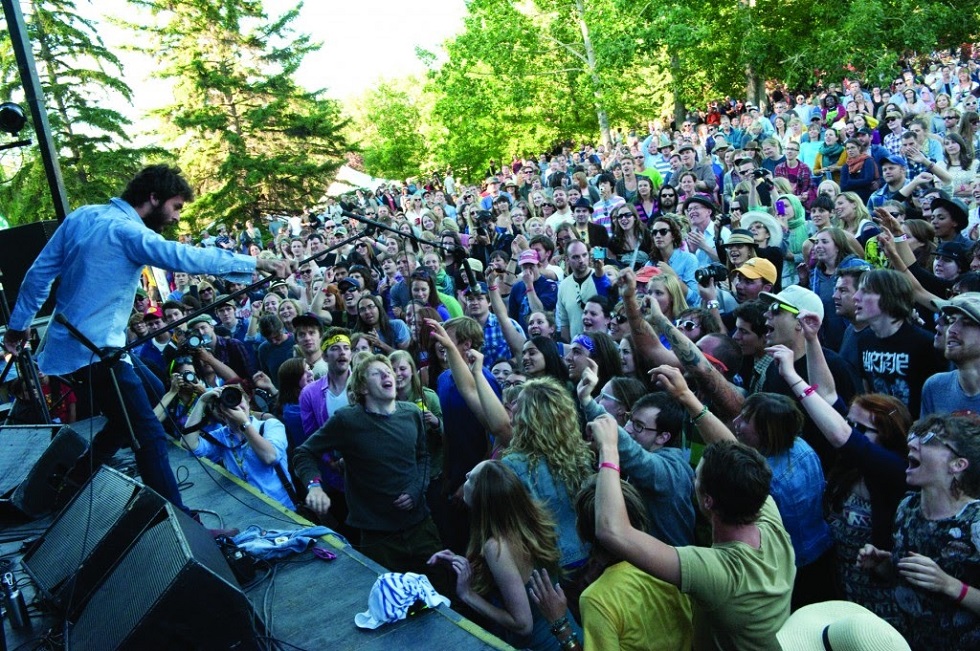 The Calgary Folk Music Festival (also known as “Calgary Folk Festival“) is an annual festival held in the month of July at the Prince’s Island Park in Calgary, Alberta. It’s one of the most eclectic things to do in Canada. It is organized by the Folk Festival Society of Calgary (FFSC). The 2020 Calgary Folk Festival will be the 41st edition of the popular festival and it will be held between July 23rd and 26th. The Calgary Folk Festival runs for four days and features 11 different stages. Over 68 performers (both established stars and newcomers) from 16 different countries hold over 100 different concerts for over 50,000 people. The Calgary Folk Festival isn’t restricted to a particular genre, nor does it exclusively feature folk musicians only. The four day fest features artists performing in the genres of roots, funk, country, old-time, world and indie. The programming of the festival always keeps evolving and bringing wonderful musical amalgamations for all of its patrons to enjoy.

Calgary Folk Festival: All You Need to Know

Who organizes the Calgary Folk Festival?

The Calgary Folk Festival is organized by the Folk Festival Society of Calgary (FFSC). The FFSC is a year-round, charitable arts organization. The goal of the FFSC is to promote city building and community engagement. The FFSC strives to achieve that through the presentation of pan-genre live musical events. The events usually feature local, national and international artists. The Folk Festival Society of Calgary started with the Calgary Folk Festival but it has expanded its role since. The FFSC’s expanded role includes the following: ownership and operation of Festival Hall; producing a year-round concert series; and Block Heater, a multi-venue winter music festival. The FFSC strives to enhance the community’s quality of life. It aims to do that through the celebration of music from diverse cultural traditions. The FFSC also aims to creatively engage audiences and artists in live music experiences through its unique and interesting approach. The FFSC is run by thirteen staff, twelve board members and is powered by 1,850 volunteers.

The Calgary Folk Festival also runs three day long intensive workshops at the National Music Centre. This is done in addition to the main festival being held on Prince’s Island Park in Calgary. The National Music Centre workshops are also conducted by festival artists themselves. The workshops are conducted in areas such as songwriting, arranging, vocal techniques and guitar. The sessions are held over three days and they allow the participants to hone their skills through constructive feedback from their instructors and peers. The Calgary Folk Festival’s Folk Boot Camp is not meant for novices. It’s best for musicians who have a basic idea of their craft and are looking for a way to supplement their own music practice and studies with some guidance from the world’s finest musicians.

One of the other highlights of the Calgary Folk Festival us the annual songwriting contest held just prior to the start of the festival. The contest’s prize purse is $20,000 and it’s spread over five different categories. The contest rewards budding Alberta artists across numerous small and large concerts across the city. Artists from all over the Province of Alberta participate in it. The 2016 Calgary Folk Festival Songwriting Contest was held at the Ship and Anchor Pub.

The Calgary Folk Festival’s organizing team also presented a winter music extravaganza called Block Heater in 2016. The event was held between February 12th and 14th. Three live music venues on the Music Mile hosted the event. The Music Mile is situated in the historical community of Inglewood. Over 20 local, national and international artists performed concerts during the Family Day weekend event. All the musical events were conducted at these three venues: Festival Hall (1215 10 Avenue SE), the Inglewood Music Club (1401 10 Ave SE) and Ironwood Stage and Grill (1229 9 Ave SE). This year’s Block Heater event will be held between February 20th and 22nd.

The Calgary Folk Festival established its new office and boutique performance space at the Festival Hall. The LEEDS Silver equivalent 200-seat flexible community space, designed by Peter Cardew Architects, includes geo-thermal passive heating and cooling systems, reclaimed materials and significant architectural details, such as the signature timbered ceiling. Festival Hall’s overriding programming and vision will mirror the Festival’s: to offer diverse, top-notch, innovative, collaborative programming and capture the sense of ownership that the audience and volunteers have towards the Festival. As a result of the Festival Hall, the Calgary Folk Festival has been extended to The Hall a year-round operation as the host of year-round concerts, multi-media presentations, collaborations and workshops. Instead of just four days in a year, patrons can enjoy the wonders of the Calgary Folk Festival all year long.  It’s also a meeting space for the Festival’s 1600 volunteers, a community space for event rentals and a multi-purpose, multi-disciplinary home for Calgary’s arts community. The Calgary Folk Festival’s Festival Hall will be an active, significant central gathering place for artists to perform, collaborate and innovate that hosts artistic workshops, discussions, lectures, song contests, master classes and other presentations which will be meant for a wide spectrum of community organizations spread across a wide range of artistic disciplines such as dance, theatre, film, literary arts etc.

15 Best Things to See and Do in Calgary

Kenya Travel Advisory: Everything You Need to Know Before Your Holiday