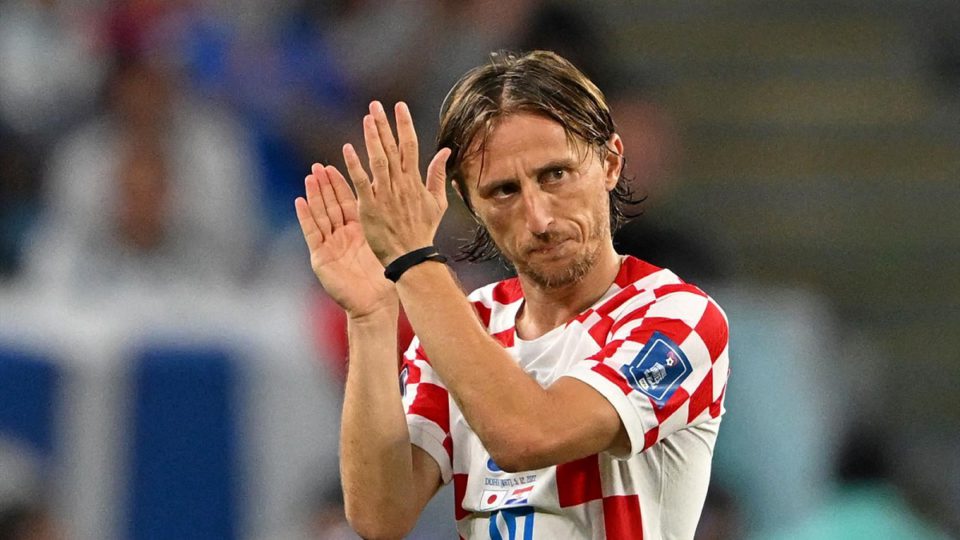 Croatia is a small Balkan nation of just four million people which has been an independent nation for just over 30 years. However, this small nation has always performed remarkably well on football’s biggest stage. Led by Ballon d’Or winner Luka Modric, the Croatian team made it to the 2018 World Cup Final and have surprisingly continued their form in the 2022 World Cup. The Croatian team, led by their 37 year old star Luka Modric made it to the semi final of the tournament where they lost to Argentina. En route to the semis, they eliminated tournament favourites Brazil in a shocking manner. One of the biggest reasons behind that spectacular performance was the play of their captain Luka Modric. The power of the Madrid midfielder lies in convincing himself that age is just a number. Let’s find out more about how he continues to be so good at 37.

Luka Modric: How Is He Still So Dominant?

What do Modric’s teammates think of Modric?

“Passing the ball to Modric, Brozovic and Kovacic is safer than having your money in a bank,” said Juranovic, one of the revelations of this World Cup. As if he worked in banking, Luka plays with his tuxedo on. He leads Croatia and his numbers show that he is at the top of the statistics, both in offensive and defensive terms. He is using his football as a message, telling Real Madrid that his contract renewal is more than necessary.

As far as the 2022 FIFA World Cup goes, the Croatian team controls the ball a lot in the midfield. Modric, with the ball at his feet, is the third midfielder who has contacted the last third of the field the most times (40), just behind Rodri and Pedri. The data shows how Croatia controls the ball in the midfield. But Modric also controls it at a higher level: he is the fourth person who passes to his teammates in the area the most per game (behind Messi, Dembélé and Di María). In addition, he is the footballer who delivers the most progressive passes (forward) per game (8.5).

How good is Modric’s defence?

When it’s time to defend, Modric isn’t afraid of getting his jersey dirty. The statistics say that he is the second midfielder in the World Cup with the most tackles and interceptions in the tournament. Between both records, he adds 20 in total and is only surpassed by Bellingham, who has already been eliminated from the tournament.

Will Luka Modric continue to play for Real Madrid?

Tchouameni, Fede Valverde and Camavinga bear the label of successors to a historic midfield for Real Madrid. Casemiro swapped the Bernabeu for Old Trafford, but Kroos and Modric continue to wear white. And with a hierarchy absolutely intact. Florentino Perez postponed the negotiations for the last renewal of Luka until after the Champions League tie against Chelsea. Modric, as a club man -he has been a Madrid player for more than a decade- accepted. He already extended his contract last season for one more year and now he hopes to extend his contract for another.

“It’s incredible how he plays, he doesn’t get tired. He’s one of the best in the world”, said Croatia’s coach Zlatko Dalic.

In a football World Cup dominated by suffocating defence and thrilling attack, Dalic’s Croatia has found refuge in its midfield from the vertigo of the stage. “I have said many times that in Croatia we have the best midfielders in the world,” insisted the coach after eliminating Brazil. “Once again, Luka led the team with a high pace and scored the penalty. It’s incredible how he plays. He doesn’t get tired, he never gives up. He is one of the best players in the world,” added the coach.

The first version of Croatia in the tournament left little room for hope. In the debut against Morocco, with whom he could come across in the final, the Balkans lived and died with Modric. Dalic’s men needed Luka’s foot to get off the ball, but also in the last third of the field to give the last pass. Little by little, Croatia has been self-regulating and Kovacic and Brozovic have gained importance.

“The midfield is the best of our team, it maintains possession and stops the rival. We can pass the ball, control the game and control possession. Our midfielders didn’t rush, it was the most important thing against Brazil,” Dalic remarked after the match against Brazil. The pass map of the match shows how the weight falls on Brozovic, who moves to the tune of Luka, Modric, and Kovacic, more liberated in the left sector.

“There is no room for him to rest because we need him every second on the pitch,” recognized Croatian defender Sosa. And coach Dalic thinks the same, because he only replaced Modric against Canada in minute 86 (and with the score 3-1) and in extra time against Japan, in the 99th minute. They say that victory humanizes, but Modric resists corroborating it. Playing at this level, at his age, is not usual. The Ballon d’Or from the last World Cup, unalterable over time, asks Florentino Perez for one more season.

Ante Budimir is a striker on the Croatian team. He has played in five different countries, representing the jersey of seven clubs (St. Pauli, Sampdoria, Lokomotiv Zagreb, Mallorca, NK Inker, Crotone and Osasuna). After Croatia beat Brazil in the quarterfinals of the World Cup, Budimir said: “I still don’t believe we’ve achieved this. For me, it’s the most beautiful moment of my career.”

Croatia has 26 heroes, but the one who wears the cape is Luka Modric. Regarding his possible withdrawal from the national team, Budimir noted the following: “He is very competitive and does not think about what will happen tomorrow. He is focused on today’s game. He will decide when it is time to retire. When he plays 120 minutes I don’t notice that he is 37 years old .”

His team fell behind 0-1 during extra time with a goal from Neymar. But led by their hero, Croatia knew how to endure and turned the game around. Without counting the final of the last World Cup, they have reached extra time in the last eight knockout games that they have played between the Euros and World Cups: “I would like to win before penalties. But it is true that we do have confidence and a cool head to face any situation,” Ante Budimir said with a chuckle.

Livakovic was once again the center of attention in the victory celebration. “It’s crazy to have a goalkeeper like that. He can save seven shots. You always have to have players available at all times to do great things. He showed that he is enormous not only from the penalty spot but also during the game,” Budimir commented.

“There is a lot of talk before the game, many forecasts are made. The journalists do their job, which I understand, but we don’t pay attention. We have investigated how we could play a good game and stop all the difficulties that Brazil was going to put us into.,” The Osasuna striker spoke of the confidence that is breathed in the locker room: “We don’t look at game percentages. We look at what we can do in 90 minutes to stop Neymar and Vinícius. These are the things that count in football”, added the Osasuna striker. Croatia believes in itself. It has reasons to do so, and the biggest one of those is its captain and talisman Luka Modric.

The Legal Situation For Online Betting In Canada and The UK

Looking for a Dentist in Newmarket? A Guide to Finding the Right One