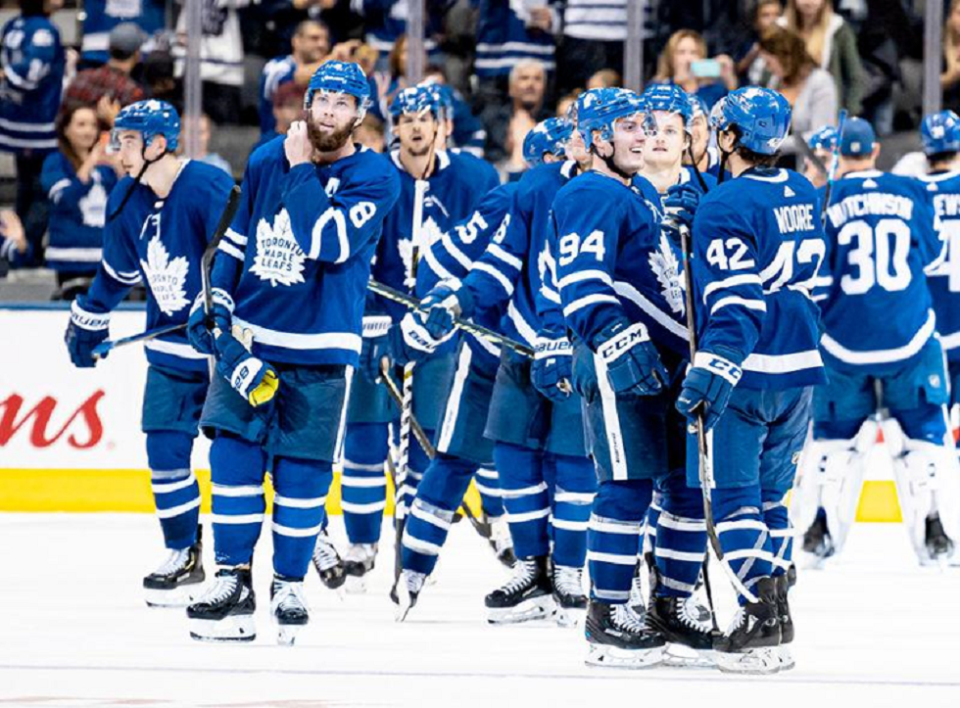 "The Maple Leafs" by Sportsnet is licensed under CC BY 3.0

The 2020-21 NHL season has reached its thrilling playoff stage, and the coveted Stanley Cup is within reach. Only 16 teams remain in the hunt for glory, including the Toronto Maples Leafs, who are gunning for their 14th Stanley Cup, their first since the 1966-67 season.

Toronto Maples Leafs won the North Division courtesy of a 35-14-7 record, which saw them finish with a five-point cushion over rivals the Edmonton Oilers and securing a playoff place for the 70th time in their history.

There are no easy games in the NHL playoffs, but the bracket has been relatively kind to the Maple Leafs. This is reflected in their Stanley Cup odds, which place them as fourth-favorites across the best online sports betting apps.

Leafs Take on the Canadiens in First Round

Montreal Canadiens are the Maple Leafs’ playoff first-round opponents. Game 1 did not go to plan for the Leafs because they fell to a 1-2 defeat thanks, in part, to an incredible performance by Carey Price in the Canadiens goal. Price made 35 saves in his first NHL start since April 19. Price missed the final 13 regular-season games with a concussion but was back to his brilliant best and managed to keep the Leafs at bay for most of the encounter.

An injury to captain John Tavares made the Leafs’ night more miserable. Tavares scored 19 goals and made 31 assists during the regular season, took a knee to the face, and left the ice on a stretcher. He is now a major doubt for Game 2.

The Leafs may trail 0-1, and teams that lose Game 1 only progress 31.2% of the time, but they have high hopes for Stanley Cup glory. They played the Canadiens ten times during the regular season and won seven of those. Sure, the Canadiens have beaten the Leads in nine consecutive postseason games, but the two sides have not faced each other at this stage of the season since 1979.

Should the Leafs manage to overcome the Canadiens, they set up an exciting Second Round series against the winner of the Edmonton Oilers and the Winnipeg Jets. Leafs beats the Oilers in six of their nine games this season and defeated the Jets in six out of ten games. Leafs fans must fancy their chances if they can progress past the first round.

Doing so sets up a mouth-watering clash against one of the two favorites for the Stanley Cup. Hot favorites Colorado Avalanche is 2-0 up against the St. Louis Blues while the Vegas Golden Knights lead the Minnesota Wild 2-1. The winner of those First Round games faces each other in the Second Round.

It is highly likely the Avalanche, and Golden Knights will take to the ice in the other Second Round fixture. This, in turn, means one of the best NHL teams of the season will fall by the wayside.  The Leafs are 9-9 against the Avalanche and are 4-2 against the Golden Knights. If the Leafs can make it to the semi-finals against either of those teams, they stand a very realistic chance of winning their first Stanley Cup for 54 years.

First things first, the Leafs have to turn things around against the Montreal Canadiens. Game 2 takes place on May 22, Game 3 on May 24, with Game 4 scheduled for May 25. Hopefully, the Leafs will have Tavares back on the ice for those games. Even with Tavares in the treatment room, the Leafs have incredible firepower in Mitch Marner and Auston Matthews. The pair scored a combined 133 points during the regular season, Marner scoring 20 goals and making 47 assists, and Matthews scoring an impressive 41 times in addition to 25 assists.

Exciting times are ahead for Leafs’ fans.