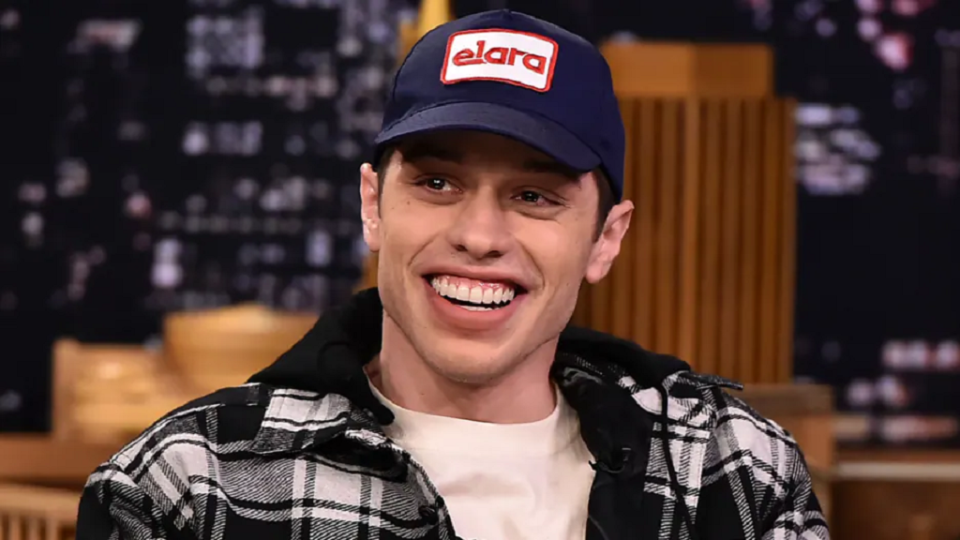 If you look at Pete Davidson, the last thing you might call him is a heartthrob. However, this goofy looking comedian has dated some incredible hotties. And he has dated women both younger and older than him. He has dated English beauty Kate Beckinsale (20 years older than him in age), Cindy Crawford’s daughter, Kaia Jordan Gerber and most notably, he was engaged to pop superstar Ariana Grande. Pete Davidson is famous for appearing in the “student-teacher sex trial” SNL skit featuring Ronda Rousey and Cecily Strong. It’s pretty obvious that he has been punching way above his weight class in real life as well. Let’s find out about this famous comedian with the hottest girlfriends.

Pete Davidson: All You Need to Know

What makes Pete Davidson so attractive to women?

In addition to his obvious sense of humor and his fame as a bad boy of the millennial Hollywood with his body full of tattoos and his colored hair, a source close to the actor confirmed in Page Six the main charm that Davidson boasts when it comes to seduce: “You can’t imagine it, but he has an impeccable demeanor and is very polite. I honestly think that’s part of the reason why women like him so much. ” If the urban legend counted by the thousands the romances of Warren Beatty, Leonardo DiCaprio, Jack Nicholson or Julio Iglesias, according to the love history of the twenty-something Pete Davidson seems willing to present his candidacy for such an exclusive club. But what is surprising in his case is not so much the quantity as the quality, that is, the popularity of all his girlfriends.

Do SNL stars date a lot of Hollywood actresses?

Working on Saturday Night Live and, above all, going to the very famous parties that take place every Saturday after the program (whose dynamics even gave rise to a series, Studio 60 ), does not help to preserve monogamy either. The format has become something of a substitute for First Dates and stars like Scarlett Johansson, Emma Stone and Ben Affleck, to name just the most recent ones, have found a match among members of their technical or artistic team. The adrenaline unleashed after a live broadcast in front of millions of viewers seems to do the rest.

Who are some of the famous women that Pete Davidson has dated?

It was precisely in Pete Davidson’s debut on SNL that he first met Ariana Grande, a musical guest on that episode. It was September 2014 and at the age of 20 the New Yorker became one of the youngest members in the history of the format after being signed by the comedian Bill Hader (Emmy winner for Barry). You have to jump to the spring of 2018 to mark the beginning of the romantic relationship between Davidson and the pop star. Both had just broken up with their respective partners (the screenwriter and actress Cazzie David and the late rapper Mac Miller) and their romance became the most followed and controversial in recent times. At the rate of daily controversy, it is not difficult to find on the Internet the timeline of a controlled relationship to the point of exhaustion and fueled by the couple’s predilection to make their love visible on social networks. Six months later, a song of the same name, several thematic tattoos and a betrothal later, the best souvenir of their relationship was the 3 minutes and 27 seconds of Thank U, Next, the super hit song with which Grande dispatched the romance. The duo have previously been quite famous for relationships but both had broken up with their last couple a few weeks or months before hooking up, initially as casual friends and later as llamas. Commendable, they are serial monogamists who officially broke up before moving on to their next partner.

After the media separation of the singer, Davidson surprised everyone by appearing with British actress Kate Beckinsale (Underworld), twenty years older than him. The couple had no trouble showing their recent passion in the stands at a hockey game, making their kisses the most repeated meme of this past spring. They met in January 2019, at one of the parties held after the Golden Globes ceremony and the relationship lasted until April. Their age difference was highly disputed by public opinion and even the comedian himself decided to refer to it on his program. “It seems that people have a great fascination for it, but it doesn’t really bother us. But of course, I am new to this. So if you have questions about relationships with large age gaps you can ask Leonardo DiCaprio, Jason Statham, Michael Douglas, Richard Gere… ”. According to published rumors, the trigger for the actress to decide to break up was the excessive media attention that surrounded the day-to-day life of the couple popularly known as Beckinson.

Barely two months lasted before his next love episode with Margaret Qualley, a performer known for her work on films such as Once upon a time in … Hollywood and the series The Leftovers. The stand-up writer accompanied his partner to the Venice festival for the presentation of the film Seberg and even the young woman’s mother, the legendary interpreter Andie MacDowell, dared to describe their relationship as “precious”.

Pete Davidson also went on to date Kaia Gerber, fashion model and the daughter of one of the world’s most famous supermodels, Cindy Crawford.

How was Pete Davidson and Ariana Grande’s relationship?

Before their engagement, Pete and Ariana got matching finger tattoos, an identical little cloud emoji in the same spot on their left hands. Additionally, Pete added Ariana-inspired inks to his collections: his initials, AG, and his bunny ears.

After many conversations behind the scenes, Pete confirmed her engagement to Jimmy Fallon on NBC by describing their union as a dizzying romance and their actions as coming at the speed of light. Tonight’s show , letting the rumors rest. Pete Davidson said getting engaged to the pop star felt like he had won a pageant. Pete popped the question on his knees with a 3-carat pear-shaped engagement ring from Manhattan-based jeweler Greg Yuna, to whom he paid nearly $ 100,000 in May. Pete Davidson’s engagement serves as an inspiration to other men, one of whom reportedly told him that he (Pete) gave him hope.

“I don’t want to be on Earth anymore. I’m doing what I can to be here but I don’t know how much longer I’ll be able to hold out. All I ever tried was to help people. Remember that I told you ”. With this message published on his Instagram account on the night of Saturday, December 15, Davidson alerted his followers, co-stars, Ariana Grande herself and the New York police – who went to the NBC studios to avoid a possible suicide attempt – about his mental health. Davidson had been diagnosed with borderline personality disorder and the “harassment” received by the singer’s fans after their separation affected him in a very special way.

How did Pete Davidson’s father die?

Nothing has been easy in the life of the comedian. When he was 7 years old, his father, a New York firefighter, died during rescue efforts at the Twin Towers after the 9/11 terrorist attacks. Since then, he has been periodically admitted to mental health centers, has struggled with drug addiction and claims that it is comedy that has saved his life. He is quite notorious for using his father’s 9/11 death in his brand of comedy at times. The comedy and his mother, Amy, with whom he maintains such a close relationship that he even lives with her. “He is a mother’s boy, she is his cornerstone and accompanies him to the recordings of the program. Everyone who works here loves her. Even if he doesn’t attend a party after the episode, she goes, ” added a member of the SNL team., who has been especially protective of “a young man so sweet that you can’t do anything but love him.”

Which movies has Pete Davidson appeared in?

Pete Davidson has had a string of hit movies that he has appeared in recently. He had a role in the sequel to the blockbuster superhero film Suicide Squad and a starring role in one of the most anticipated films of next year, The Staten Island, directed by Judd Apatow. This movie will be a semi-biography where Pete Davidson will portray the role of his heroic father who died during 9/11.

Have You Tried An Online Casino Yet? Here’s Why You Should