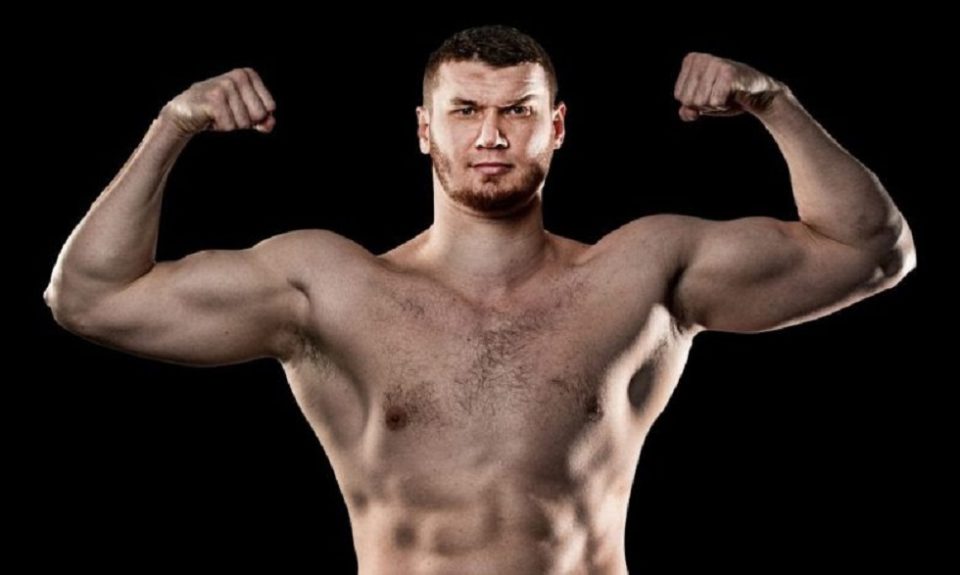 Arslanbek Makhmudov is a Russian-Canadian unbeaten boxing beast. He has recently been signed to the Golden Boy Promotions’ stable in partnership with Eye of the Tiger Management.

The 30-year-old “Lion” has a pro record of 10-0 (10 KO) since joining the paid ranks in 2017. He’s fought all of his pro bouts in Canada and is based in Montreal. Most recently, he knocked out former titleholder Samuel Peter in the first round on December 7th, 2019.

Aslanbek Makhmudov is very confident about his current promoters and firmly believes that he will reach his goal of becoming the heavyweight champion of the world. Speaking on the matter, Makhmudov said: “I’m confident that with my team, Eye of the Tiger Promotions and Golden Boy Promotions, I will reach my goal of becoming heavyweight champion of the world.”

Camille Estephan, who heads Eye of the Tiger Management was also ecstatic about bringing Arslanbek Makhmudov to North America. He said:“I’m thrilled to bring the top heavyweight prospect in the world to the U.S. with Golden Boy Promotions. We plan to send a message to the heavyweight division with his performances. I’m partnering up with Oscar, Eric, Robert, Bernard and their team, and I believe we will have a heavyweight champion of the world together.”

“In recent years, we have had somewhat of a renaissance in the heavyweight division,” said Oscar De La Hoya, Chairman and CEO of Golden Boy. “The big fights, heated rivalries and constant media exposure that the heavyweights are getting these days is very good for the health of the sport. By signing fighters such as Arslan Makhmudov, we are doing our part in continuing this momentum into the future. Makhmudov is a knockout artist who is joining our ranks after compiling an impressive record of 10 wins with 10 knockouts with our friends at Eye of the Tiger Management. We look forward to working with Camille Estephan and the entire team as we develop Makhmudov into a world champion.”

Let’s find out more about this powerful Russian-Canadian pugilist.

Arslanbek Makhmudov: All You Need to Know

When was Arslanbek Makhmudov born?

Arslanbek Makhmudov was born on June 7, 1989 in the city of Mozdok of the Republic of North Ossetia in Russia. He is a Kumyk.

Where did Arslanbek Makhmudov study?

Arslanbek started boxing quite late – at the age of 14.

Which sport did Arslanbek Makhmudov participate in before boxing?

Before Arslanbek Makhmudov started off with freestyle wrestling before he started boxing. His first coach’s name was Tumashev.

Which division does Arslanbek Makhmudov fight in?

Arslanbek Makhmudov fights in the heavyweight division of boxing.

How tall is Arslanbek Makhmudov?

Makhmudov is listed at six feet 5.5 inches and usually weighs around 260 pounds. And as you can see from his picture, that’s 260 pounds of solid muscle.

He became the winner of several major tournaments among juniors and senior youths in the territory of Server Ossetia. Then he began to train in Moscow at the CSKA school under the direction of Nagim Khusnutdinov.

In 2012, he took part in the World Youth Championship in Yerevan ( Armenia ), but did not make it to the medal rounds.

From January 2011 to March 2016, he fought 16 times in the World Boxing Series , representing the Azerbaijan team, Azerbaijan Baku Fires. Of the 16 fights in the WSB, he only lost three fights during 2011-2012. His losses came against eminent boxers such as: two-time Olympic silver medalist Italian Clemente Russo, Moroccan participant in three Olympics, Mohamed Arjaoui, and experienced New Zealander Junior Fa.

In 2014, he won the Azerbaijan Cup and became the best heavyweight of the 2014 season in the WSB League.

In 2015, he fought for a license for the 2016 Olympic Games in Brazil, trying to take first place in the ranking of the best heavyweight boxers for the 2015 season in the WSB league, but failed to win a license – giving way to qualification to the Olympics in WSB rating to Croat Filip Hrgovic, and in qualification for WSB / APB to Venezuelan Edgar Muñoz. At the same time boxing in WSB, he defeated experienced boxers such as: Italian Guido Vianello (TKO4), Venezuelan Edgar Muñoz (TKO5) and Romanian Mihai Nistor (KO5).

Arslanbek Makhmudov began his professional boxing career on December 8, 2017 by virtue of a TKO victory in the 1st round of Mexican boxer Jaime Barajas (4-1-2) .

After he turned professional, Arslanbek Makhmudov signed a contract with the famous Canadian promoter company Eye of the Tiger Management, which is led by Camille Estefan. And now Arslanbek Makhmudov lives in one of the best cities of Canada, Montreal and trains under the guidance of Mark Ramsey along with such champions as Arthur Beterbiev, Eleider Alvarez and David Lemieux.

Arslanbek Makhmudov has built a fearsome reputation among boxing fans all over the world. He is widely regarded as the best current heavyweight boxer out of Russia. The “Lion” has also put his sights on Anthony Joshua, who holds three heavyweight title belts. The 30- year-old showed his ferocious power in the amateur ranks as he stopped Romanian Mihai Nistor. This was the same guy who knocked Anthony Joshua out during the 2011 European Championships. Makhmudov also  knocked out Italy’s seasoned boxer Guido Vianello. Arslanbek Makhmudov was well aware of the pedigree of Mihai Nistor before fighting him. After the fight, he said: “It was 4 or 5 years earlier. He won versus Joshua in the amateurs right? I won versus him in the WSB, which is semi pro. Throughout the fight, I tried to land my uppercut and I could easily land it in the 11th round as well.”

Since relocating to Quebec, Canada, Arslanbek Makhmudov has terrorized the heavyweight division and after knocking all his 10 opponents out, he has his sights firmly set on the heavyweight belts.

When asked about why he moved from Russia to Canada, Arslanbek Makhmudov said: “I relocated my profession to Canada, since my buddy informed me it’s an excellent location for boxing. I have an excellent group below, an excellent instructor, an excellent marketer. Canadian followers are unique. The individuals like me.”

While Arslanbek Makhmudov might want a shot at ANthony Joshua’s belts, he has a lot of respect for the British boxer. When asked about his opinion on Joshua, Makhmudov said: “Yes, I regard Joshua as a great fighter, an excellent individual, I like him.”

Arslanbek Makhmudov is also ready for a Battle in Britain and to take on Anthony Joshua on his own turf. He is ready for whatever challenges his promoters throw at him. Arslanbek Makhmudov turned professional with only one goal, to become the heavyweight champion of the world and no big names are going to intimidate him. He had this to say about facing Anthony Joshua for a title in the future: “If Joshua is still champion, if I have a fight with him, don’t worry, I will put my gloves on and be ready to fight.” As the Russian Canadian Lion roars through the heavyweight division, everyone else better beware. He will hit you harder than the combined wrath of Russian and Canadian winters.