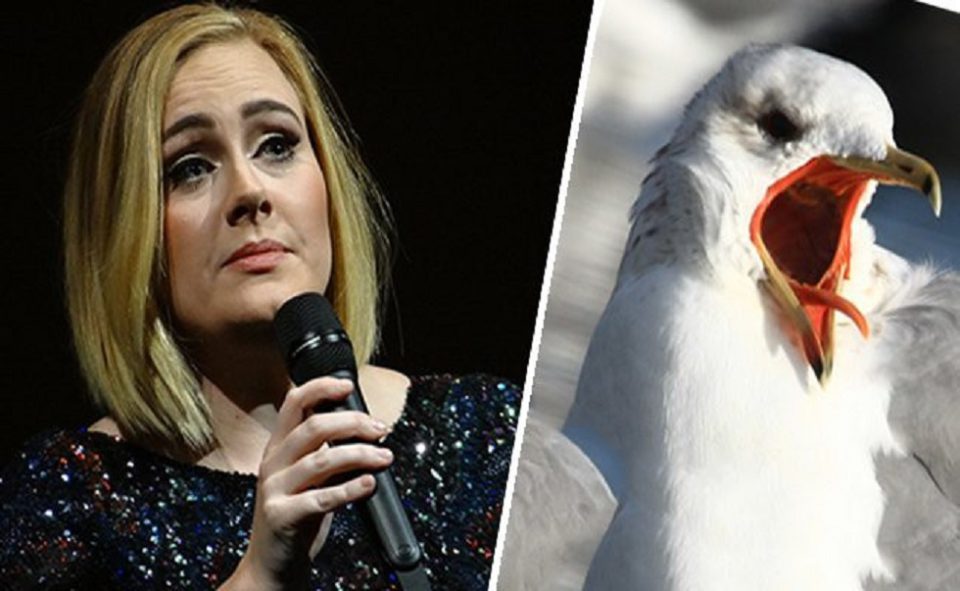 While some of these phobias are common, some sound quite weird, like the fear of mirrors or losing hair. It’s even more strange and endearing when a person held in high esteem has a random phobia as it reminds us that after all, they’re still human.

Adele shocked millions of fans some years back when she revealed her fear of seagulls. That’s right, the recipient of 9 Brit Awards, 15 Grammy Awards, 18 Billboard Awards, 5 American Music Awards, and a Golden Globe Award is scared of ‘seagulls’. While there’s no specific phobia term for that, it falls under the fear of birds (ornithophobia).

As you probably know, seagulls are typically medium to large birds, usually gray or white, with distinctive black markings on the head or wings, webbed feet, and a mostly yellow and slightly hooked beak.

In an interview with Metro, she remarked, “I was walking down the promenade in Tenby, eating a 99 when this huge f***ing seagull came down and swiped it off me. I’ve got a scar from its claws on my shoulder. I thought it was going to take me away with it. I’ve got a phobia of seagulls now.”

In case you’re wondering, Tenby is a popular seaside town in West Wales, and ‘99’ is an ice cream cone made with soft-serve ice cream, into which a Flake candy bar has been inserted. She was only 9 years old when the attack happened. It’s easy to comprehend the deep psychological impact that experience must have had and why she still admits to having that secret fear.

The Notoriety of Seagulls

Seagulls, especially the larger ones, are omnivores, eating birds, fish, reptiles, small mammals, and fruits. Moreover, acclimatized seagulls have learned to associate humans with food and also feed on leftovers.

Over the past few years, seagulls with bad attitudes have been on the rise, either by savaging dogs or stealing chips, ice cream, or sandwiches.

The whole problem of greedy seagulls comes from the fact that humans have been deliberately feeding them in the past. And as they lose their fear of humans, why shouldn’t they opt for an easy meal whenever they get the chance?

To improve human/seagull relations, we have to stop feeding them! And the same is true of other wildlife/human encounters. If you have a seagull problem near your home, visit here for professional resources.

Even decades after that incident, Adele still admits to having this unreasonable, yet uncontrollable fear of seagulls. We all take it seriously because it happened to an esteemed person. But the reality is that negative interactions with wildlife, especially for children, have lifelong psychological impacts. As a society, we need to handle our interactions with wildlife better than we currently are!

Hudson and Rex: 5 Interesting Facts About The Show You Didn’t Know

What are the Most Popular Online Casino Games in Canada?