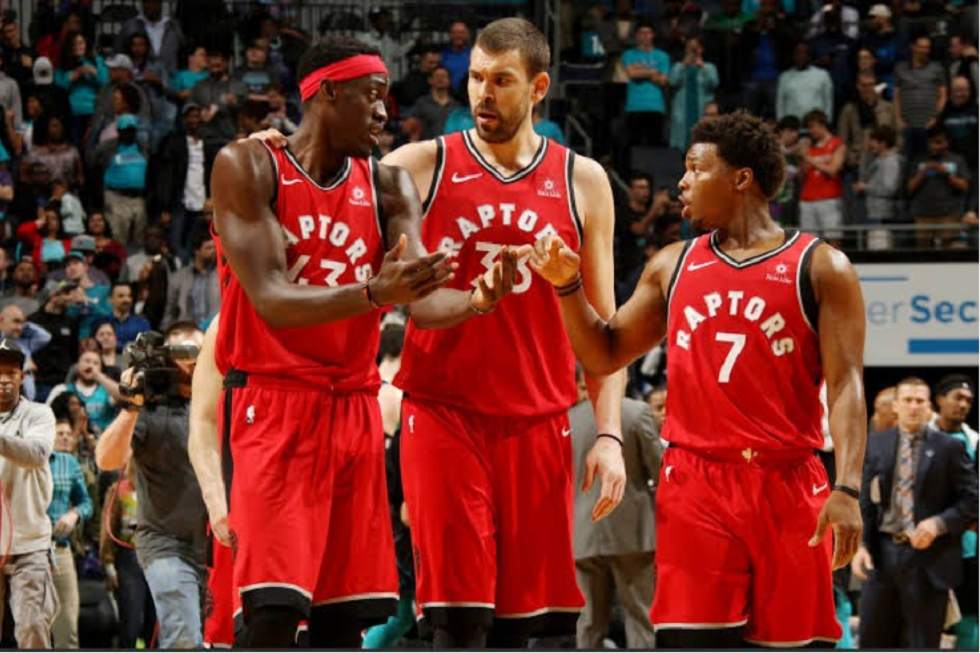 Even after losing 2019 NBA Finals MVP Kawhi Leonard in free agency to the Los Angeles Clippers, the Toronto Raptors have refused to fade away from relevance in the NBA’s Eastern Conference. The pride and joy of the city of Toronto, the Raptors are going strong. As of today, the Toronto Raptors are currently in the fourth spot in the conference with an impressive 25-13 record. They have even managed to win some games without their rising superstar Pascal Siakam. They have won nine of their last 15 games and are looking like a force to reckon in the East. They are only 2.5 games behind second placed Miami Heat. Most analysts had predicted that the Raptors will go into rebuilding mode after Leonard’s departure. As a result, they were expected to be sellers around the February trade deadline. However, their strong performance has resulted in a situation where they should be looking for making roster upgrades in order to contend for a championship this season. The Raptors need to trade to improve since their championship window hasn’t closed yet and they don’t need to start rebuilding.

What are the trade options for the Toronto Raptors?

According to Chris Mannix of Sports Illustrated, after seeing his team’s current performance, Raptors President of Basketball Operations Masai Ujiri could once again make big moves that could improve their chances of dominating the Eastern Conference and defending their throne this season. Mannix mentioned several players who could be on the team’s radar before the trade deadline. These include Kevin Love and Tristan Thompson of the Cleveland Cavaliers, Jrue Holiday of the New Orleans Pelicans, and Robert Covington of the Minnesota Timberwolves.

This is what Chris Mannix had to say about the Raptors trade scenario:

“The Raptors could be active everywhere. They have the expiring contracts. They have the intriguing young players. They have the future draft picks. They could probably pluck Toronto native Tristan Thompson out of Cleveland anytime they wanted. If they got aggressive, they might be able to quickly cut a deal for Kevin Love, too. Versatile wings like Holiday and Robert Covington could be in play.”

Love and Holiday would be incredible trade targets for the Raptors. Though they are not as dominant as Kawhi Leonard was last season, the two veterans are both capable of filling the hole he left on the offensive end of the floor. Love would give the team an All-Star-caliber big man who is capable of knocking down shots from beyond the arc. The potential arrival of Love wouldn’t force Pascal Siakam to make huge adjustments to his game as the Cavaliers star knows how to efficiently play alongside ball-dominant players.

If acquired, Love would definitely start at center/power forward for the Raptors. Even though he is 31 years old, he is still a top rebounder and a very good scorer of the ball.

The biggest problem with acquiring Kevin Love is the fact that he is still owed $91.5 million over three years in his current deal. If the Raptors trade for Love, they might not have enough cap space to try and acquire Giannis Antetokounmpo during the 2021 free agency.

The other option for the Raptors is signing the Pistons’ center and rebounder in chief, Andre Drummond. He is leading the league in rebounds with 15.9 rebounds per game. On top of that, he is only 26 years old. However, Drummond’s contract is expiring this year and he will most likely be a half season rental for the Raptors if acquired by the trade deadline. The Detroit Pistons are looking for a rebuild since Blake Griffin has also been hampered by injuries. The team’s front office has been engaged in trade talks with the Atlanta Hawks, mainly around Drummond. ESPN’s NBA Insider Adrian Wojnarowski tweeted:

“Drummond has a $28M player option for next season that he is unlikely to exercise, forcing the Pistons to consider the possibility of losing him in free agency. Among teams, there’s an increasing belief that Drummond will be moved before (the) February 6 trade deadline.”

Meanwhile, Holiday wouldn’t only give the Raptors a very reliable scoring option but also a great perimeter defender. Though he normally plays as a point guard, he likely wouldn’t have a hard time developing chemistry with Kyle Lowry in Toronto’s backcourt since he can excel on the floor even without the ball in his hands.

Though they aren’t superstars, Thompson and Covington would also be good additions to the Raptors. Thompson, a Toronto native, would boost their frontcourt, while Covington would give them a three-and-D wingman who could serve as Siakam’s primary backup. He could also be used as the team’s starting small forward when they choose to use Siakam at the four.

Why should the Raptors look for a trade?

En route to their maiden NBA Championship last year, the Toronto Raptors had acquired veteran center Marc Gasol from the Memphis Grizzlies via trade. Gasol had a major impact on the team and played a crucial role in helping the team win the championship. This year however, he might be the piece that the Raptors will need to trade if they want to get back to championship contention. Last year’s Gasol trade is a testament to the aggressive and shrewd business acumen of team President Masai Ujiri and GM Bobby Webster.

Both Marc Gasol and Serge Ibaka will be entering free agency at the end of this season and their expiring contracts can be used as a great trade bait for a rebuilding team. Both of them could be used to acquire a great center. Gasol is 35 years old now and Ibaka isn’t good enough to be a team’s main center.

If the Raptors are able to acquire a true star center, it will provide a major boost to the team’s rebounding abilities. The Raptors are currently number 10 in the league in rebounding and would really like to improve on that, especially since their Eastern Conference rivals such as the Boston Celtics, Brooklyn Nets and the Milwaukee Bucks are ahead of them.

Toronto definitely needs some help now. Especially with Gasol and Ibaka out with injury, they are really short handed.

As the NBA season reaches its halfway point, the Toronto Raptors are still bang in the middle of the playoff race in the East. Despite their persistent injuries, the Raptors are probably just a star acquisition away from contending for a championship. The Raptors can choose their own destiny, based on their aggression in the trade market.

VanVleet came down with a hamstring strain in the 121-102 victory against the Brooklyn Nets. He had a stellar game where he scored 29 points and dished out 11 assists. The major credit of this season’s success definitely goes to coach Nick Nurse’s amazing and aggressive defensive strategy. Getting an elite big man who can protect the rim will bolster the defence even further. Getting a personal injury lawyer to fight all the injury bugs in not an option for the Raptors.

Luckily for the Raptors, their schedule through the rest of January is quite light. They will only play two teams with winning records during this month, the Oklahoma City Thunder and the Philadelphia 76ers. Even a short handed Raptors team should be able to come out of this light schedule without suffering a major skid.

And if they can add a star around that time, the Eastern Conference Finals race will suddenly become much more interesting.

Menno Versteeg: A Brief Snapshot of His Life and Career