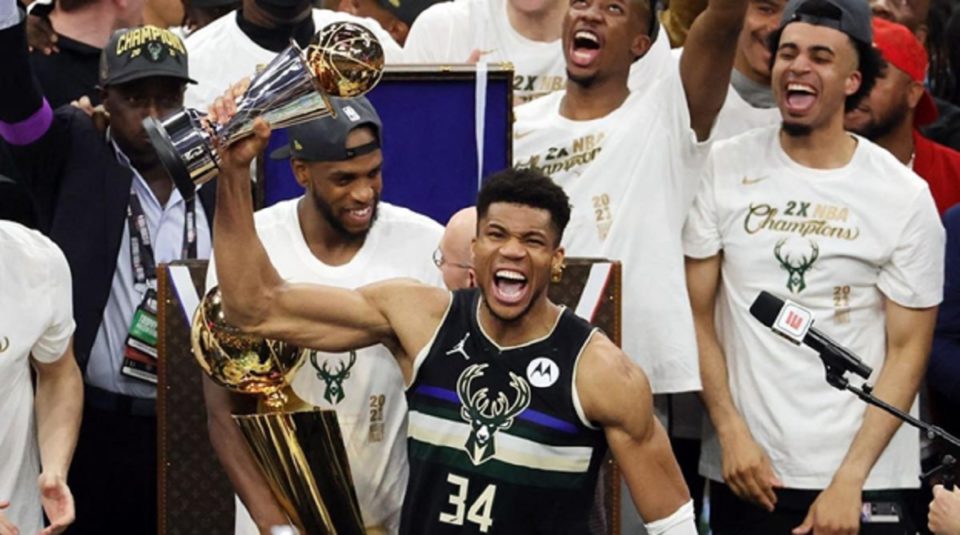 The Toronto Raptors found a bright spot amid an otherwise subdued season on Thursday night, ending the Milwaukee Bucks win streak at eight with a rare victory at the Scotiabank Arena.

Fred VanVleet finished the game with 28 points to lead all scorers and, after fighting through a pair of defenders to score with around three minutes left to play, raised his hands to the crowd, who returned thundering cheers.

“It was one of those moments: playing so hard, working so hard, obviously given the circumstances, I think we really deserved that win,” the guard said. “I just wanted us to give us some energy and some momentum going into those last two or three minutes.”

The Raptors, who are having an injury-filled campaign, notched a 97-93 win at home to end a four-game losing streak. The win marks just their third on their home turf for the season.

Of course, MVP Giannis Antetokounmpo’s absence was a huge help. The Raptors found out the defending champions would be without their superstar player 30 minutes prior to the start of the contest and made the necessary adjustments.

The Bucks had won eight straight, with their last coming against the Charlotte Hornets

“In the back of your head, you thank the man upstairs and try to get a win,” VanVleet said with a laugh. “Me being in this league for so long, that’s something you don’t really show the young guys. They need to understand it doesn’t matter who is playing.

“I watched their game [Wednesday night]. I knew those guys were going to be gassed and tired tonight. It was important for us to push the pace and be the aggressors and see how much they had in the tank. That championship pedigree, they fought to the last point-seven [on the clock], for sure.”

Jrue Holiday led all scorers for the Bucks with 26 points.

Siakam had admitted Raptors fans deserve better on the back of a 98-91 loss to the Memphis Grizzlies and five straight losses at home, marking the first such stretch since 2011. The Raptors are 3/1 to make it to the playoffs this season as Ontario online sports betting is sure to be an attraction heading into the business end of the campaign. Bookmakers are offering 1/5 on them not playing basketball past the close of the regular season.

Nick Nurse’s side got off to a good start against the Bucks on Thursday night, holding them to a three-point lead before going up by 11 later on. They went into the fourth quarter with a five-point advantage.

Milwaukee got to within two late on but VanVleet spurred a 7-0 run to put the Raptors up by nine points. His gesture towards the crowd was “Just intensity, get everybody in the game, stay locked in and trying to get the crowd involved. We need that energy and you can play off that and feel good,” according to Precious Aichuwa.

A three from Bobby Portis Jr. cut Toronto’s lead to three with 33 seconds left. Both teams proceeded to make multiple trips to the free-throw line. VanVleet scored two foul shots to put the Raptors up by five. The Bucks had their opportunities at the charity stripe but missed two of their five shots from there.

Aichuwa would also miss two for the Raptors with 3.6 seconds left on the clock but Barnes secured the rebound to ensure the win.

The rookie, who has seen his shooting improve in recent outings, made his presence felt on the defensive end and did a good job guarding Khris Middleton, who scored 22 on the night.

“When we found out Giannis was not playing, we were deciding what our game plan on Middleton would be, and Scottie stepped up and said ‘I’m gonna guard him, I’m gonna guard him hard,’ so let’s start with that,” Nurse revealed after the game. “So he did and I thought he did a good job on him, made him work.”

The Bucks were also without Brook Lopez and the newly-acquired DeMarcus Cousins.

Toronto, though, has suffered many absences this season. OG Anunoby missed his eighth game on Thursday with a hip injury and there’s no timeline for a return. Khem Birch is also out with a swollen knee.

Nurse will be pleased to have Trent Jr. back. The shooting guard wasted little time getting on the score sheet on his return, scoring the first points of the game with a three-pointer.

Anunoby is unable to practice as he has experienced a setback in recovery but Nurse hopes to have Birch back soon.

“I think it’s getting better,” the head coach said. “He’s not in practice or anything but I see him in the gym and it seems like he’s working fairly hard so I think it’s improving, hopefully he’ll be back soon.”

It will be interesting to see where Toronto goes from here. This win over the champions, plus the return of Trent Jr., should give them something to build on. Fans will hope they could continue winning from there.

Ultimate Guide to the Finest Blackjack Side Bets Strategies