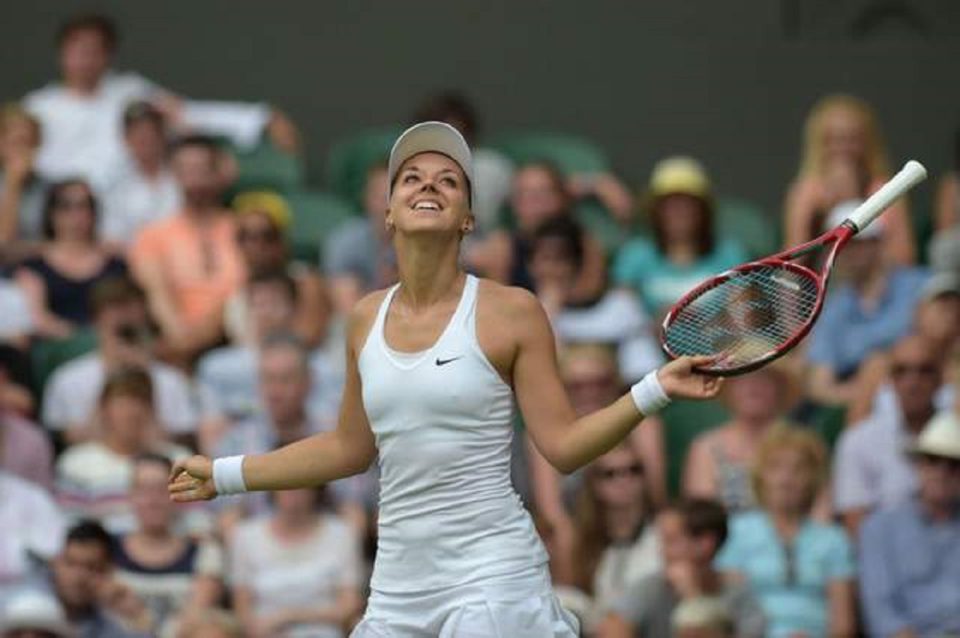 Sabine Lisicki, a German tennis player who was born on September 22, 1989, began competing professionally in 2006. She reached the best moments of her career when she reached the quarterfinals of the Wimbledon Championship in 2009 and also won her first title on the WTA tour, at the Family Circle Cup against Caroline Wozniacki.

Wimbledon has always been considered a play rich in the well-established British tradition and being a part of the Wimbledon tournament is every player’s dream. And there Sabine Lisicki was seen smiling against all odds during a practice session on day eleven of the Wimbledon Lawn Tennis Championship at the All England Lawn Tennis and Croquet Club on 5th July 2013 in London. She has consistently dazzled the crowded crowd court with her lovely grin, earning her the moniker “Smiling Darling.”

In 2010, Sabine Lisicki could not compete in the Wimbledon finale due to a crippling ankle injury and an odd allergy to grass. This was not just an ordinary injury, it was hard for Lisicki who eventually was dropped to #218 position in the world and even worst had to learn how to walk all over again. She was told to be on crutches for the next six weeks at least but always had the hope to return to her playing regime once again.

Although she is allergic to grass and has had a five-match losing streak on the grass in 2019, she still considers her favorite surface to play grass. Currently, she is on medication for her allergy and “loves” playing on it.

She is the only second woman to have entered Wimbledon as a wildcard and advanced to the semifinals in 2011, however she was unable to take home the title.  She later compensated for her Wimbledon defeat by winning her third WTA tournament, the Texas Open. Before entering Wimbledon as a wildcard entry, she rebounded herself in 2011 and won herself the title of Aegon Classics.

She feels it is a privilege to compete against Serena Williams since she has always heard great things about her. She was noted as claiming that Williams and Andy Murray served as inspirations to her after suffering a serious knee injury in 2020.

She is a right-handed player who has won four titles. As of August 2022, her world rating is 401; at its top, it was 12 in May 2012. She won her third WTA competition, moving her up to rank 12. Her heavy ball striking is renowned for its topspin, power, depth, and angles. She is also known as “Boom Boom” for her massive serve and thunderous groundstrokes. Lisicki’s forceful and committed style of play has led Barbara Rittner, the captain of the German Fed Cup team, to compare her to Steffi Graf. Her serve is often described as a cannon and a howitzer with a speed of 120 mph. The world’s fastest serve record, which was previously held by Venus William at 129 mph, is now recorded under her name for 131 mph.

Do you know – Dr. Richard Lisicki, Sabine’s father, who holds a degree in sports science, instilled a passion for sports in her. He started her tennis when she was just seven years old and is also her coach. Her father is reportedly her main inspiration and motivation, and she feels that her family is what counts most.

Sabine joined the Nick Bollettieri Tennis Academy, Florida in 2004, and since then she has been training at the Floridian Academy.

In addition to the championships mentioned above, she has received 4 WTA single titles. Including four WTA doubles championships, including the Miami Open, and the WTA’s top tournament in Charleston. She received the 2011 WTA Comeback Player of the Year title for her exceptional efforts following her injury. She was also recognized as holding the title of fastest serve in the world from July 29, 2014, until February 19, 2018.

With 27 aces in her second-round match against Belinda Bencic at the 2015 Aegon Classic, Sabine Lisicki also holds the record for the most aces in a singles match. This was later taken over by Kristyna Pliskova at the 2016, Australian Open.

Despite having incredible statistics and career strokes to her credit, she has not yet won a Grand Slam trophy. Her entire career prize money was estimated to be approximately $7 million, and her total net worth is estimated to be around $9 million. While she was at the top, she participated in several brand sponsorships, including Nike. In 2013, she also served as a brand ambassador for Peugeot, a French automaker, and backed jewelry designer Thomas Sabo.

Sabine was in a relationship with Oliver Pocher since the summer of 2013. She had met him during her finales at Wimbledon. By profession, he is a German actor, stand-up comedian, television host, and former football manager. However, they got separated after being in a relationship for three years and currently, Sabine is single.