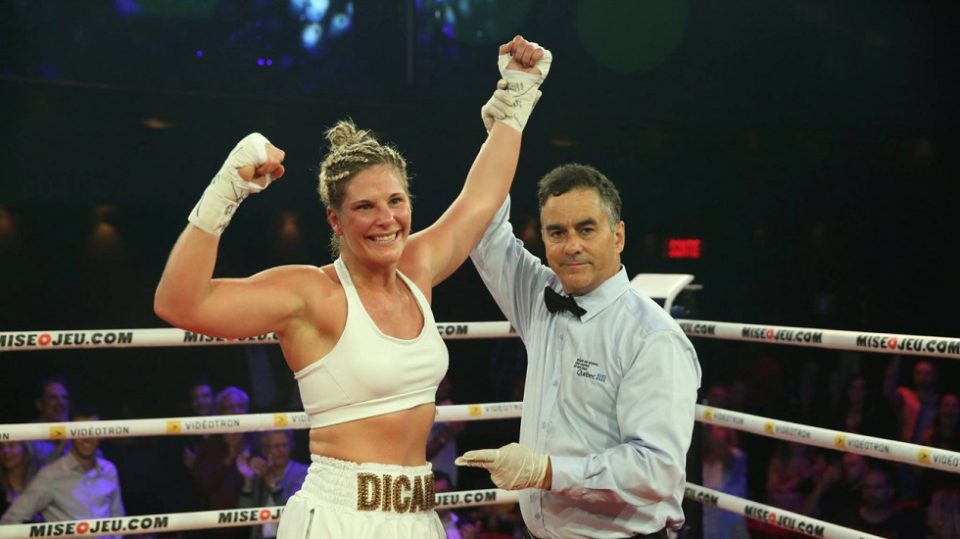 Marie-Eve Dicaire is a professional boxer hailing from Canada. The lady has mastered the sport and she has won several hearts through her skills. She is trying her best to legitimize women’s spot in combat sports. Furthermore, she aims to inspire everyone especially the youth to chase their passion just like she did. Marie Eve has been entitled as Athlete of the Year by Box Quebec. Marie is holding the female IBF title in the light-middleweight division since 2018. She was the first Quebec champion to win the IBF World Super-Welterweight belt.

Marie has many championships under her belt which includes Canadian championship, Quebec championship and Ringside World Championship. According to rankings given by BoxRec, Marie Eve Dicaire holds the numero-uno spot in the welterweight category.  She even holds the record of 17 wins in a row since Nov 2015.

Marie Eve Dicaire is one of those people who choose their career from a very young age and dare to chase their dreams. She started combat sports when she was just a toddler and her journey to fame has been really remarkable. Let’s learn more about her.

Born in the year 1986, Marie Eve Dicaire is 34 years old in 2020. She stands 5 ft 8 in tall and her body weight is 140 lbs. She plays in the Welterweight and light middleweight division and her stance are Southpaw.

How was the early life of Marie Eve Dicaire?

On 29th July 1986, Marie Eve Dicaire came into this world. She was born in Montreal, Quebec. She was interested in combat sports from a very young age. When she was just 6 years old, she got interested in karate. So, she took proper training in Karate. By the age of 11, she became a black-belt holder and she even won Karate Canadian championship at the same age. Next, she became an International Champion in Karate at the age of 18. Marie is an 18-times Karate champion in the Canadian championship. She even gained a black belt in kickboxing. After participating in these combat sports, she unleashed her true passion to become a professional boxer when she was 24.

What is the net worth of Marie Eve Dicaire?

According to sources, Marie Eve Dicaire’s net worth is $1.3 million. She has accumulated wealth through her boxing matches and championships. She even earns through her endorsements and campaigns that she’s a part of.

Marie decided to shape her career in the field of boxing when she was 24 years old. She was a World Champion in Karate but she wanted to try her hands in boxing. So, she joined the sport in the year 2011.  Here are some highlights of her boxing career:

In her amateur career, she was a part of 50 fights. She did well as an amateur and lifted many titles. Marie Eve Dicaire won Ringside World Championship in 2012. Then she bagged Quebec Gants Dores Champion, Canadian Amateur Champion and Ringside World Championship, all in 2013. For her incredible performance and winning streak, she was named Athlete of the Year (2013) by Box Quebec. She even won Golden Gloves Championship two times in a row: in 2012 and 2013.

After 4 years as an amateur, she turned into a professional boxer in the year 2015. She has played 17 matches as a pro. Furthermore, she holds the record of 17 wins in all 17 matches so far. She won the WBC-NABF female light middleweight title in 2018 and the same year, she bagged IBF female light middleweight title. She has been able to retain her title three times by defeating her opponents in the championship matches.

Marie Eve Dicaire made her official debut as a pro on 20th November 2015. In her fight held in Sorl-Tracy, she defeated Christina Barry. Again on 21st January 2016, the Canadian boxer defeated Christina Berry. She faced Martha Patricia Lara in her third match which was held on 17th March 2016 at Montreal Casino. She kept her winning streak and beat the Mexican veteran boxer.  Next, Marie battled with WBC’s 16th rank holder Ashleigh Curry on 24th May in Montreal Casino. Once again, Marie was able to maintain her winning streak.

Her fifth, sixth, seventh and eighth fights were against Karla Zomara, Paty Ramirez, Lisa Noel Garland and Ajelandra Ayala respectively. All these fights took place in Montreal Canada and she was a winner in all of them. In her ninth battle, she defeated Yamila Ester Reynoso and then she beat Paty Ramirez for the second time in her tenth fight.

She got her hands on WBC-NABF Championship in the light-middleweight division after beating Marisa Gabriela Nunez in February 2018. In her twelfth fight, she beat Yamila Belen Abellaneda and she defeated Ajenandra Ayala in her thirteenth fight. Then, she went on to win the IBF female light middleweight title in December 2018 after defeating Chris Namus. Next, she faced Mikaela Lauren, Maria Lindberg and Ogleidis Suarez in April, June and November 2019 respectively for the world championship but she was able to retain her title successfully.

Marie Eve Dicaire is a well-known name in Canada. The boxer has earned respect, love and a spot in everyone’s heart owing to her skills and abilities. She is maintaining her undefeated streak as a professional boxer and she is a current boxing champion in the light middleweight division. We wish he all the best for her future fights and we even hope she enjoys her life to the fullest!