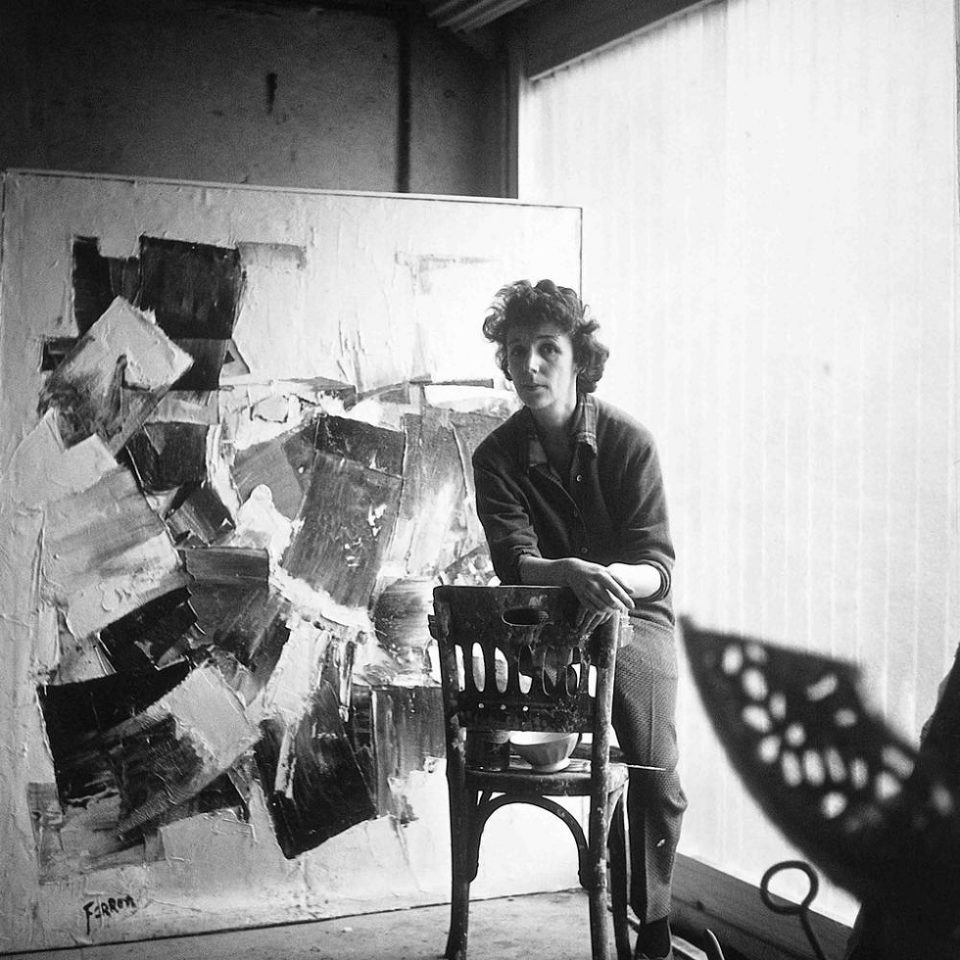 Shifting between painting, sculpting and glassmaking, Marcelle Ferron’s famous installation in Montreal’s Vendôme station was unveiled in September 1981. Marcelle Ferron’s striking design combined colorful stained glass with a spiraling stainless steel sculpture, a unique style that inspired interest in glass as an art medium. Over time, Marcelle Ferron was revolutionary in devising her own methods of building “walls of light” connected by invisible joints that allowed her to create large planes of color. Such innovative techniques can be seen in her mural for Expo 67 and also in the Champ-de-Mars train station, Sainte-Justine Hospital, and the Granby courthouse which were public commissions. Throughout her 50-year career, Marcelle became one of Canada’s most important contemporary artists earning her a Knight of the National Order of Québec in 1985, which was later promoted to Grand Officer in 2000. The renowned Canadian artist was a restless visionary whose achievements blazed a trail for female artists within a traditionally male-dominated space.

Marcelle Ferron: A Quick Look At An Extraordinary Artist

She was an orphan:

Born in 1924, Marcelle Ferron came into this world in Louiseville, Quebec. At the age of seven, she lost her mother, and her father moved the family to the country, hoping the rural environment would be good for his children.The famous Quebec writers, Jacques Ferron and Madeleine Ferron are her brother and sister respectively.

She was a sick child:

As a youngster, Ferron suffered from tuberculosis in early childhood and frequent stays in the hospital forged in her an independent spirit. After she was done with high school, she went on to study at the college Marguerite-Bourgeois and then registered at the Quebec Ecole des Beaux-arts.

Ferron quit college before finishing her studies, finding that the instruction did not fit her idea of modern art. But within a few years of experimentation, she met Paul-Emile Borduas. Mentoring her, he was important in introducing her to a new abstract style of painting. Under his tutelage and mentorship, Ferron formulated an approach to painting which led her to express her own personal ideas.

Marcelle Ferron was an active participant in Les Automatistes, led by Paul-Émile Borduas and became one of the youngest artists to sign their 1948 manifesto Refus global.

In 1946, she was part of a group of painters known as the Automatistes. Ferron  was known to exhibit with them and quickly gained recognition in the art world. When the Automatiste group disbanded in 1953, Marcelle Ferron decided to shift to France. She separated from her husband and left for France with her three daughters.

Here, she settled in Clamart, a suburb of Paris, where she lived alongside her studio. The artist supremely concentrated on painting, making this a very productive period in her life. It paid off.

Full of light, her strong abstract works caught the attention of gallery owners, and influential figures in the French art world such as Herta Wescher, who helped her to organize exhibits throughout Europe. In Paris, Marcelle Ferron also networked with many other artists, such as Leon Bellefleur, and Jean-Paul Riopelle.

Ferron’s paintings became progressively more forceful. Vibrant colours and larger, fluid forms dominated the canvas. Like fellow Automatistes Paul-Émile Borduas and  Jean-Paul Riopelle, Ferron used to spread paint on the canvas thickly, with great intensity and straight from the tube, many times using a palette knife rather than a brush. In Lascive(1959), for instance, bright white bars of paint push vertically into the foreground, streaking and blurring into horizontal bars of purple and blue. Les barrens (1961), on the other hand, has jagged, congested patches of red, blue, purple and black against a spacious, open white ground.

As you can see, the period she spent in France was extremely significant for her career as her stay in Paris, from 1953 to 1965, brought her closer to the proponents of lyrical abstraction. Her abstract paintings, agitated by tumultuous bursts, were full of movements and contrasts.

Suffice to say, upon returning to Quebec in 1966 she became an internationally-known artist.

During her stay in Quebec she met the glass maker, Michel Blum. She found that working with glass allowed her to explore light and colour more fully. In collaboration with a team of glass technicians, she invented a method that allowed her to build walls of light. She inserted antique coloured glass between sheets of clear glass, thereby perfecting a technical way of making the joints invisible. Her first major glass achievement was the mural for Expo 67. However, it was the glass wall that she created for the Champ-de-Mars metro station that is widely regarded as her masterpiece. It was commissioned in 1966 by the city of Montréal under mayor Jean Drapeau. It was installed in 1968 with the help of master glassworker Aurèle Johnson. The stained glass is 60 m long with a maximum height of 9 m, and extends across three walls of the station’s spacious mezzanine. The piece principally consists of wide, swooping bands of red, blue and green, which dapple the station with coloured light. Johnson restored the window in 1999.

Such art would lead to many glass art commissions for public spaces. Around this period Canadian artist Marcelle Ferron also taught architecture and art at the University Laval. She returned to painting around 1985.

In 1983, Marcelle Ferron became the first woman to receive the Prix Paul-Emile-Borduas. Her other honors include a silver medal she won at the Sao Paulo Biennieal in Brazil in 1961. The Government of Quebec recognized her contribution to Quebec culture with the Ordre national du Québec. As the first female artist to receive the prestigious Paul-Émile Borduas prize, she struck a chord in the next whole generation of artists working to secure a place for women in the arts.

Notably, Marchelle Ferron was an early feminist who in a traditional male dominated industry faced and overcame many obstacles. A woman of integrity, the Canadian artist was devoted to her work, insisting that she did not paint for collectors, rather, was her passion and way of life. Looking back, she broke ground for women artists in Canada today which is especially noticed if you look at her awards.

Henry Cole: 12 True Facts You Never Knew About The Host