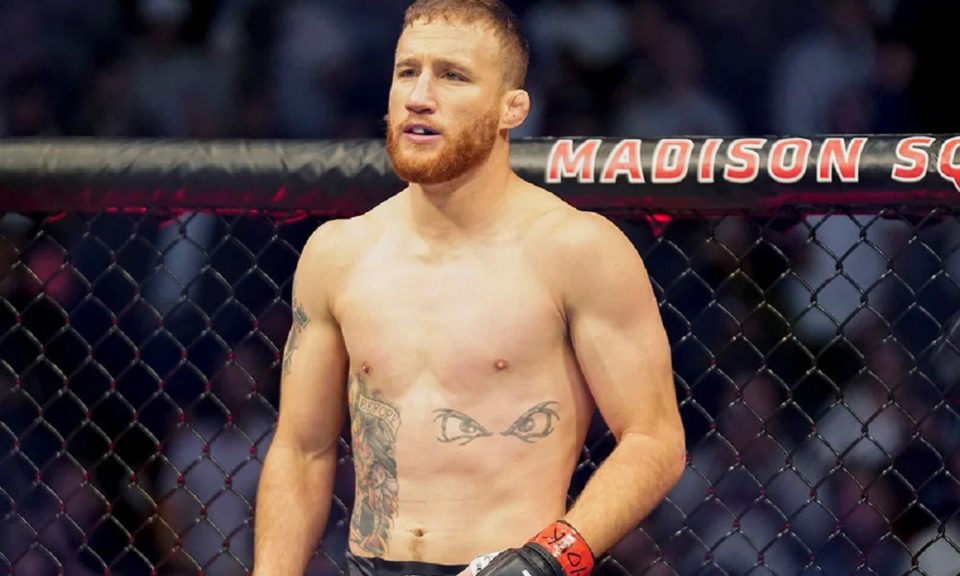 Many people consider Justin Gaethje to be the most aggressive individual to ever compete in a violent sport. Gaethje has, above all, unquestionably and magnificently stayed true to that designation. Gaethje may be summed up as a wild guy with an unconventional fighting technique. Similar to this, every time Justin engages in combat, it is an absolute show that no fight fan wants to miss.

Additionally, Justin’s battles offer more than simply an exhilarating experience and explosive entertainment. If we look at it attentively, Gaethje is also really effective, has excellent fighting skills, and has outstanding fighting methods. Gaethje is indeed an elite-level wrestler with a rich wrestling history despite becoming well-known as a knockout artist with a strong stand-up and striking game.

We may thus conclude that whatever Justin performs in the cage is characterized by controlled chaos and lunacy. Gaethje has also achieved the titles of Interim and Lightweight Champion as a result of several prestigious MMA promotions. Above all, Justin is referred to as “The Highlight.” Additionally, Justin has thrilled us all with a life full of highlights. MMA fans refer to him as the “human highlight reel.” Let’s get to know this fascinating person’s life in detail through stats, news, and biography.

The American city of Safford is where Justin Ray Gaethje had been born. Justin was also born to their father John and mother Carolina. Gaethje is of mixed heritage because John is of German and Carolina is of Mexican origin.

Similar to John, who spent 36 years as a copper miner at the Morenci mine, Carolina formerly held the position of postmaster. Gaethje’s paternal grandpa served in the army and was also a boxer. Justin also has a twin brother called Marcus and two sisters. Marcus also worked in the mine for almost ten years. Justin spent the summer working in the mine. Justin decided to attend college and quit his mining job all at once. However, Gaethje was advised by a couple of his comrades that he would never make it but would have to return to a mine. This provided Justin with the motivation he required to succeed.

In 1988 on November 14th, Gaethje was born. Since this unconventional fighter is still only 32 years old, we may expect to witness a lot more of his battles in the future. Professional mixed martial arts fighters put a lot of physical and mental demands on themselves. However, Justin is prepared to take on anyone at 5 feet 11 inches (1.80 meters) in height and 70 kgs in weight.

While attending Safford High School, Justin started wrestling when he was only four years old. Gaethje competes at the top level of wrestlers and has previously competed at the NCAA Division I level. He formerly held the fifth-best wrestling ranking in the nation and, during his collegiate years, wrestled MMA luminaries like Georges St-Pierre. Gaethje doesn’t appear eager to apply his wrestling expertise to MMA, though.

Before making his professional MMA debut in 2011, Gaethje had a 7-0 amateur record. In December 2012, World Series and Fighting quickly signed him. During playing time in the WSOF, he truly established a reputation for himself. In addition, Justin beat up and bloodied his opponents while winning the lightweight title. After that, Gaethje announced in 2017 that he had given up the championship and joined the UFC, one of the biggest names in mixed martial arts. Similar to this, Justin kept up his impressive play and rose to prominence in the competition.

Gaethje’s career was highlighted by his victory against the tough Tony Ferguson to win the interim lightweight championship of the UFC. Still, this fascinating boxer has more and better things ahead of him.

Charles Oliveira and Justin Gaethje squared off on May 7, 2022, at Rio de Janeiro, Brazil, at UFC 274. First-round submission ended his fight. 3 months and 3 days have passed since the altercation. Gaethje has fought five times in the past two years, 10 months, and 27 days, or once per seven months on average. He engaged in 12 rounds of combat in those battles, averaging 2.4 rounds per fight.

Justin is a very laid-back and private guy. Gaethje occasionally posts family photos and videos on social media, but he keeps his romantic relationships very private. Gaethje may potentially be a single person.

A modest individual with a bachelor’s degree in social work who also works in social services is Justin. Despite his fighting career, Gaethje needed a photorefractive keratectomy to correct his vision.

How Long Does It Take for an STD to Show Up?