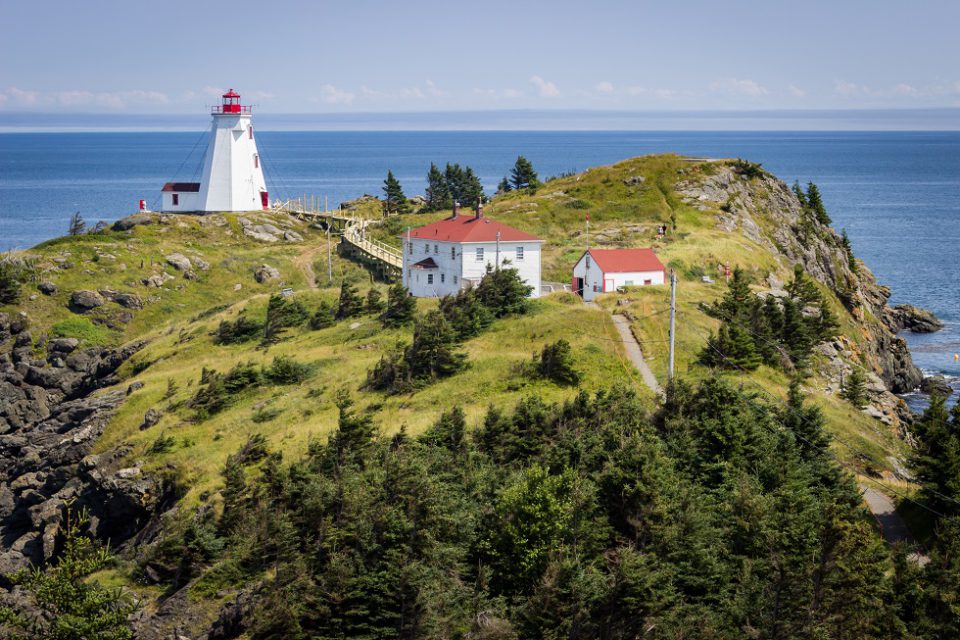 Have you ever been to a remote island off the coast of New Brunswick? Between the provinces of New Brunswick and Nova Scotia, lies Grand Manan Islands – home to some spectacular landscapes, but one of the most underrated. This land mass, which rests off the Atlantic coast between Canada’s Bay of Fundy and the Gulf of Maine, is a hidden gem.

“Dramatic coastal hiking, kayaking, combing for tidal treasures or artisan crafts – here you can be as adventurous or tranquil as you like,” the official Island website explains. “You can tuck yourself into a quaint cottage or inn, or sleep with the whales while camping under the stars.

Dive into a freshly steamed lobster or a seasonal menu but make sure to leave room for a captivating sunset. We invite you to step ashore, to explore our rugged coastal beauty, to get inspired, and best of all to leave everyday realities down at the wharf.” Sounds dreamy, right?

Grand Manan Island sounds so fancy and looks like it’s worlds away, but it’s just an hour-and-a-half ferry ride from mainland New Brunswick. Daily ferries take passengers from Blacks Habour, NB, which is about 40 minutes southwest of Saint John, and send them over to the remote island, which is home to about 2,500 people. Almost 100 cars are transported per day during peak summer hours and there’s also a regional airport on the island itself for folks who’d prefer to fly in directly. Here are five reasons to visit Grand Manan, one of Canada’s coolest islands.

Swallowtail Lighthouse on Grand Manan looks like something out of a painting. It was built in 1860, before confederation, and is the first lighthouse on the island. It’s one of the most photographed lighthouses in the entire province, too, and it’s easy to see why. The highway that weaves along the coastline of Grand Manan takes visitors from one epic vista to the next, including a number of lighthouses.

The southwest head of Grand Manan has some truly incredible rock formations begging to be explored. The cliffs are made from basalt which was caused by a massive volcano eruption millions of years ago.

Avian aficionados will love the diverse bird watching opportunities on Grand Manan – with over 300 different species, this is the most diverse location for bird watching in all of Atlantic Canada! It’s also home to a bird sanctuary which spans across 600 acres and was established by the Government of Canada as a place to protect the animals.

Grand Manan is a beautiful island, made up of several small fishing communities.

Grand Manan established a reputation for fishing and shipbuilding in the early 19th century, and undertook the harvesting of hackmatack, birch and oak.

Back in the 1700s, fishing was the main industry on the island, and locally-sourced smoked herring was being shipped around the world to Europe, the Caribbean and beyond. Today, tourism is one of the leading industries for islanders, but if you’re a visitor you’ll get to enjoy the creme de la cream in the freshest seafood around thanks to the local seamen who head out to the waters daily.

Between 1800 and 1884, Grand Manan was now the largest supplier of smoked herring in the world. By 1920, the island produced a staggering one million boxes—or twenty thousand tons—of smoked herring, all caught in its local waters. By the late Victorian era, Grand Manan had been discovered by a new breed of explorers—the “tourists”—who began visiting the island in steady numbers.

This is the place to grab your camera for catching some whales!

Other Things To See/ Do

Grand Manan has a network of trails for all-terrain vehicles, hiking, mountain biking, nature walks, and presents a challenging landscape for jogging.

There are a lot of freshwater ponds, lakes and beaches on the Island that are prime locations for sunbathing, beachcombing, and picnics.

There is regular car-ferry service from Blacks Harbour, NB. There is no fee for the trip to Grand Manan, however, you must pay for your return trip. Prices and an up-to-date schedule can be found here.

A 1,000-m air strip for small planes is near the centre of the island. The closest commercial airports are Saint John, and Bangor, Maine.

To enjoy everything from kayaking to fishing to paddleboarding to swimming, you need a good night’s rest. Even if you’re not keen on getting wet, finding an Adirondack chair to curl up in and watching the ocean from the shoreline is just as satisfying. Grand Manan had something for everyone – quaint cottages to heritage homes and other unique places to rest your head after a day of exploring.

Homeshare websites like Airbnb have a variety of homestays that can be rented by the day, week or month.

Wilderness camping is available from May through November.

Offers supervised 103 camping sites on a seasonal basis (May through to the beginning of October), including pull through, serviced and un-serviced lots. Sanitary and cooking facilities, shower and laundry facilities, playground, a nearby beach, and a dumping station

The climate in spring, summer and fall is very comfortable but winter has an inconsistent weather pattern with snow, rain, freezing rain and mild weather.

After Grand Manan, Go Next To

Once you’ve driven to the island, consider taking a second ferry over to White Head Island, an even more remote fishing village. While Grand Manan might be uncharted territory for many Canadians, it remains the largest island in the Bay of Fundy, making it an ideal vacation destination with quaint accommodations, beachcombing for days, museums, eateries and art galleries. Most of all, what you’ll find in this island is some much-needed peace and quiet.

Speaking of the Bay of Fundy, head to Machias Seal Island, a bird sanctuary, is reachable by tour boat on a very limited basis from Grand Manan.  It has no permanent residents, and is maintained by the Canadian Wildlife Service (CWS) as the Machias Seal Island Migratory Bird Sanctuary.

The island is full of lush green meadow covering the higher areas and the rocky shores. Infact, the southernmost point in New Brunswick, the rocky 6-ha (15-acre) Machias Seal Island is home to the last of the manned lighthouses in Canada.

The island is a Canadian Wildlife Service sanctuary and nesting ground for:

Over 100 species have been spotted: migratory birds and incidental visitors, including several uncommon and rare species.

There are very limited facilities to bring passengers ashore from boats; typically a tour operator will transfer at most 15 passengers at a time onto small craft for landing.

Access is very much at the mercy of the weather and entry is strictly forbidden during nesting season (June and July), except by permit issued by the CWS. There are a few blinds from which to view the birds unobtrusively, but the amount of time a voyager may spend ashore at the bird sanctuary is strictly limited to a few hours per trip.

For many years, the U.S. and Britain squabbled over the ownership of Grand Manan.

But it was a Portuguese explorer João Álvares Fagundes who initially charted the area around Grand Manan in about 1520. The island became part of New France, by which there was no French settlement, and in 1713 it was traded to the British in the Treaty of Utrecht.

The British ownership title for Grand Manan was documented in Jay’s Treaty of 1794. Grand Manan established a reputation for fishing and shipbuilding in the early 19th century and undertook the harvesting of hackmatack, birch, and oak. Today, it belongs to Canada.

How long does it take to drive around Grand Manan Island?

To drive around, use the main road (Route 776) that runs from the northern tip to the southern tip via the eastern shore, which is about a 30 minute drive end-to-end. You can also use another road that cuts across the island to the only accessible point on the western shore, called Dark Harbour (get-away destination for islanders, far from residents).

How much is the ferry to Grand Manan?

There is no fee for crossing to Grand Manan Island. Fees are charged on the return sailing to the mainland. NOTE: There are NO scheduled trips on Christmas Day or New Year’s Day.

What does Grand Manan mean?

“Manan” is a corruption of “mun-an-ook” or “man-an-ook”, meaning “island place” or “the island”, from the Maliseet-Passamaquoddy-Penobscot First Nations.

Its name is part-French, part-Passamoquoddy (munanook, meaning “island”) in origin, who, according to oral history, used Grand Manan and its surrounding islands as a safe place for the elderly Passamaquoddy during winter months and as a sacred burial place (“ook”-means “people of”).

With a population of about 2500 – chiefly in the villages of North Head, Grand Harbour and Seal Cove – its chief industries are scallops, herring, lobster and salmon aquaculture, dulse (seaweed) gathering and tourism.

How long is the ferry ride to Grand Manan?

The crossing takes 90 minutes and whales are often spotted en route. There are no reservations or tolls for getting to Grand Manan Island – the first in line in Blacks Harbour is the first on board the vessel.

Are there puffins on Grand Manan Island?

It doesn’t matter where you stand on the island – you will spot thousands of birds flying by!

What Are the Advantages of Studying for an MBA?

Best Vegan Restaurants in Toronto for Vegan and Vegetarians