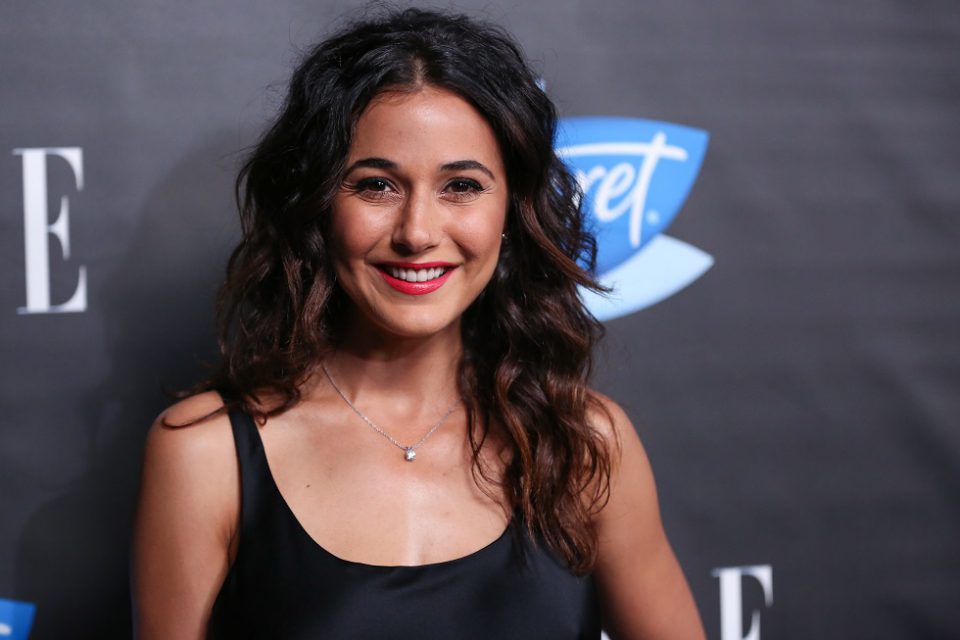 Emmanuelle Chriqui is a Canadian Morrocan television and film actress. She is known for playing the role of Dalia in the movie ‘You Don’t Mess with the Zohan’ as well as her role on “Entourage” as Sloan McQuewick and from starring opposite Simon Baker in “The Mentalist.”

She is also known for performing in the dramas ‘Vampire Princess Miyu’, ‘Thundercats’, ‘Tron: Uprising’, ‘Murder in the First’ and ‘Cleaners’. Voted the eighth sexiest girl by FHM in 2008, Chriqui is adored by people for both her acting skills and good looks. She once ranked No.81 on Maxim’s ‘Hot 100’ list. Her last name is pronounced “Shreeky” and she speaks both English and French. Emmanuelle has an older brother and an older sister, and her family practiced Orthodox Judaism in the Sephardic tradition.

Emmanuelle Chriqui is a Canadian film and TV actress who was born Emmanuelle Sophie Anne Chriqui on December 10, 1977, in Montreal, Quebec, Canada (the French speaking part of Canada). The Moroccan beauty started acting at a young age and rose from playing minor roles into a fully-fledged performer adored by audiences.

Chriqui was born in Montreal, Quebec, Canada the daughter of Moroccan-Jewish parents.

Her parents were both born in Morocco as her  mother, Liliane, was born in Casablanca, and her father, Albert, was born in the capital city of Rabat. She also has relatives in Israel. Her family practiced Orthodox Judaism in the Sephardic tradition.

Emmanuelle Chriqui said this statement about embracing her ethnicity: “It’s frustrating because the girl next door is always blue-eyed and blonde. I can play the girl down the block! Sometimes I think, ‘If only I were blonde,’ and then I smack myself out of it”.

Yes, no one else can morph from Meditteranean to French to Palestinian to American and pull it off as well as Chriqui. She is a true chameleon.

Emmanuelle Chriqui often gets confused for the actress Nina Dobrev:

Vampire Diaries actress Nina Dobrev bears an uncanny resemblance to the You Don’t Mess with the Zohan actress.

Actress Nina Dobrev has appeared in several films and TV shows. While The Vampire Diaries was her shot to fame with her Bulgarian looks and while Emmanuelle Chriqui grew famous for her Moroccan beauty, they are both Canadian and both their families have lived in Toronto, the biggest city in the province of Ontario.

Nina was born in Sofia, Bulgaria, to Bulgarian parents, Michaela (Radeva) and Konstantin Dobrev. Nina Dobrev’s family moved to Toronto, Ontario, Canada, at the age of 2, and she was raised there. She is fluent in English, French, and Bulgarian.

Emmanuelle Chriqui’s family also moved to Toronto, Ontario, when she was almost two. The Morrocan and Jewish actress grew up in Markham, Ontario, a suburb northeast of the city.

The sexiest thing she owns is a pair of jeans:

Emmanuelle Chriqui loves her ripped jean-shorts. “ They’re really worn in — the pocket linings hang out the bottoms, and I love that I can wear them with my flip-flops or a silky blouse and high heels. It’s a nice juxtaposition”.

Her mother was an aesthetician who once told Emmanuelle that she would become an actress, passed away when Chriqui was sixteen years old. As a child, Chriqui’s brother began paying for her to take acting classes and she would go on to  attend the drama program at Unionville High School. After high school, Emmanuelle Chriqui decided to pursue a full time career in acting.

Later Chriqui began acting as a 10-year-old in a McDonald’s commercial. After graduation, she moved to Vancouver where she waited tables to pay the bills and auditioned. In the mid 1990s, she guest-starred in series such as Are You Afraid of the Dark?, Forever Knight, Once a Thief, and Psi Factor: Chronicles of the Paranormal.

Emmanuelle Chriqui had no idea Duchess Meghan was once her costar:

The actress and Meghan appeared together in the 2006 film Deceit, but she had no recollection of the same.

“She was in that?” Chriqui, 43, exclaimed to Us at the 29th annual Environmental Media Awards in Beverly Hills on Thursday, May 30, when she heard about the connection. “I didn’t even know that! That is amazing. I had no idea. Mind blown right now! I don’t remember that at all! That’s hilarious. OK, I’m going to be Googling that later.”

In Deceit, actor Matt Long plays a man who comes back to his hometown to mourn his father’s death and ends up having an affair with Chriqui’s character. She is the wife of his best friend, played by SEAL Team actor Luke Mably. Meghan who was then 37 had a small part in the film and played the role of Gwen.

According to her IMDb filmography, the gig in Deceit was the future duchess’ seventh acting role, coming before her guest-starring roles in 90210 and Fringe and long before her seven-season arc on Suits.

She’s a stern believer in washing her face:

I religiously wash my face, no matter what. I can’t fall asleep properly if I don’t wash my face. I’m a big skin girl, and love to get body scrubs when I can. This Mineral Fusion lotion in “Waterstone” is my favorite – it smells incredible.

I am really inspired to be as green-conscious as I can be. It’s really important to do our part more than ever, and I feel like we’re really seeing this in the food industry, in health and wellness, and that cosmetics is next. Skin is the largest organ that we have: we ingest so much through our skin, so many toxins, all the pollution that we live in.

Emmanuelle is also an environmentalist and drives a Prius. “I’ve always been attracted to the alternate lifestyle, meaning organic and natural and alternative healing.”

It seems to be no surprise that the  actress also made a name for herself in beauty by collaborating with Mineral Fusion on a natural skincare line. She believes in caring for the environment, partnering with great causes (including founding her own, Raise Hope for Congo), and kept those ideas in mind when choosing to endorse Mineral Fusion.

She believes in maintaining her figure:

As diverse looking as she is beautiful, Emmanuelle Chriqui has become one of film and TV’s most desirable actresses.  The actress who rose to fame for her role as “Sloan” on HBO’s Entourage, does Pilates and yoga to stay in shape. “I love to dance. I can crank up the music, have fun, and get all shaken up. I love hiking, too.”

Emmanuelle Chriqui was never meant to be an Entourage regular:

“I know that originally I was supposed to do three episodes of the show, but when I joined the show, Kevin Connolly (who plays E, Sloan’s love interest) said to me, ‘We can really turn this into something,’ that’s what he was always thinking,” Chriqui recalls.

“And then that turned into the rest of the season, turned into a couple more seasons, turned into six seasons and here we are for the movie, it’s kind of surreal,” she says, though she believes the show creator Doug Ellin is the reason behind it all happening. “I do know that he really loved E and Sloan together, he loved it.”

What convinced him was probably their chemistry. Throughout the show’s run the two broke up and made up, enabling Chriqui to play to the hostile relationship that makes it so easy to perform, not to mention she has been close friends with Connolly for a number of years. “We played opposite each other for so long and always in these tumultuous circumstances. The writing really hands it to you… [it] just makes it effortless to get right back into.”

“I had this big hard belly strapped on to my midsection. It really helped to like, walk a certain way!

After finally starring in seven of the eight seasons of Entourage, Chriqui once admitted that she did not expect the film to come out. “No, initially, not at all. When things were winding down at the end of the series, there was a lot of talk about a movie and then it kind of went away, it was just like, ‘Well, that would be cool, but I doubt it’s going to happen, whatever moving on.’

Playing the tempestuous love interest of the show’s resident good guy, Kevin Connelly, earned her enormous following and an entry to the pages of men’s magazines like Stuff and Maxim, where she was often cited as one of Hollywood’s most desirable women.

Emmanuelle Chriqui has a net worth of 9 million:

Chiriqui worked at salons to prepare for her movie ‘You Don’t Mess with the Zohan’:

The 30-year-old actress adds that she carefully researched the role, which is essentially playing the straight woman for the likes of Sandler, Rob Schneider and John Turturro.

“Dalia’s this feisty, fierce Palestinian who moved to New York four to five years ago, and Zohan begs her for a job,” said the actress who took lessons by  slaving in a salon and also worked for two months with a Palestinian-born dialect coach to perfect her accent. She then went to Middle Eastern restaurants in Los Angeles – in character – to road-test the vowels.

Her ease with languages comes naturally – Chriqui, who speaks fluent French, was born into an Orthodox Moroccan Jewish family in Canada.

“As Sephardics, if you practice at all, it’s in an Orthodox way,” she says. “But I wasn’t orthodox [with] wearing skirts down to my ankles.”

Interestingly,  Chriqui drew on her late mother’s heritage and force-of-nature personality for Dalia’s feisty comments. “We always joke that Moroccan women don’t talk – they yell at each other.”

She picked up some makeup hacks from her sets over the years:

“I’m a big fan of highlighting the brow bone and the cheeks. Certainly, when you’re really tired, stay away from the smoky eye, wear clean makeup on your face and do a bold lip instead. I’m a fan of the three-second nose job (shaping along the nose bone), and you suddenly have a new nose. A really great trick when you have a really bad pimple  is to convert it into a beauty mark with a dark brown or black pencil and color it, and powdering it.

She can’t sing in crowds:

I have the best connections of anyone in town. I could so have a record deal if I wanted one!” she jokes.

“I have mild stage fright to begin with, and it’s the thing that really scares me – singing in front of a crowd of people.”

When asked about her knowledge of the same, the actress commented: “ I’ve been reminded of it my entire life. People think they are the first to ask me when they ask me if I know what it is. I guess I became aware of it in my teens, and now I just blatantly tell people they aren’t original when they bring it up.

The Most Expensive Houses In Canada That You Have To See To Believe!