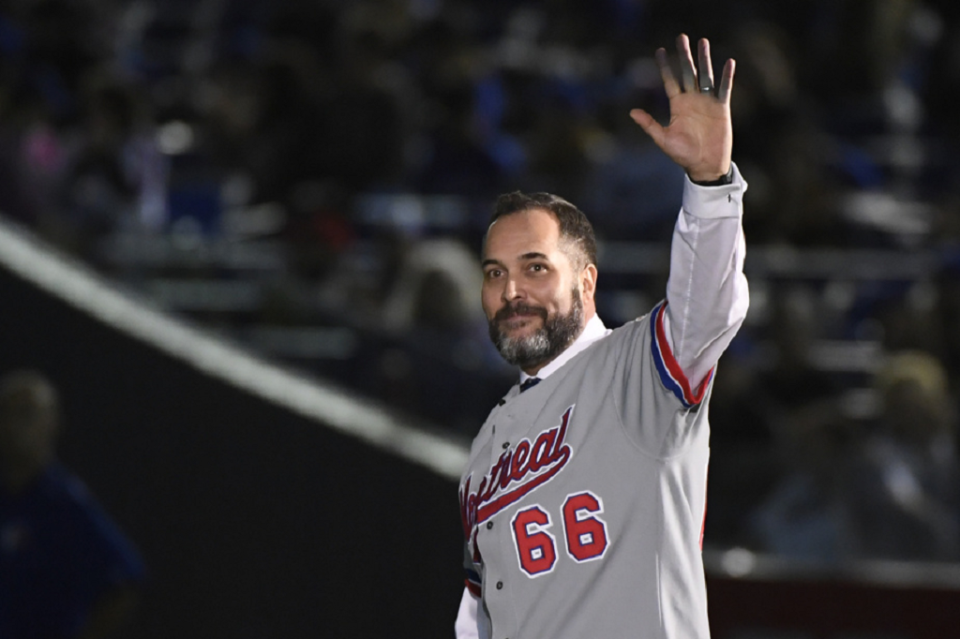 A native of Lachine, Derek Aucoin was part of the Montreal organization from 1989, including two games with the Expos in 1996. In two innings and two thirds, he gave one run and three hits, with one walk, and one strikeout. He was also active in the New York Mets subsidiaries in 1998.

He was then a radio host during the 2000s, notably on TVA Sports and 98.5 FM, where he delivered his sports chronicles until his state of health prevented him from doing so. Derek Aucoin was awarded the Medal of the National Assembly by the Minister of Economy and Innovation, Pierre Fitzgibbon, to honor his career, but especially his social involvement, and great human values.

Host and analyst at TVA Sports and 98.5 FM for several years, Derek Aucoin was inducted into the Quebec Baseball Hall of Fame in late 2020.

Having signed as a free agent with the Montreal Expos on July 17, 1989, Derek Aucoin played in the minor leagues with the Rockford Expos (level A), the West Palm Beach Expos (level A +), the Harrisburg Senators (AA) and the Ottawa Lynx (AAA).

He appeared in two major games with the Montreal Expos in May 1996, pitching two and two-thirds innings. He was also briefly part of the New York Mets organization, with whom he aligned in the minor ranks in 1998.

​​In what he wanted to be a legacy for his son Dawson, it was mission accomplished for the biography Derek Aucoin, La Tête Haute (which means Head Held High).

Granted, this book is about a baseball player, but it’s much more than that. It is about a man who loves life, as a whole. Obviously in good times, but who still manages to recognize its precious aspect in the trials and darker passes. The protagonist is unfortunately too often lacking in softness and lightness, and he makes us see life through the eyes of the heart.

Reading the book by author Benoît Rioux, we quickly see that Derek Aucoin, the man, is more than a player, a baseball coach, or a sports host. He is an outstanding trainer on the behavior and attitude to adopt in order to be the most beautiful version of ourselves, both in baseball and in our daily lives.

He talks about building your life to improve each day in your quest to become a good human being, for yourself and for others.

Derek Aucoin, La Tête Haute suits all types of reads – the ones who barely read and the more experienced. They are great stories, simple and effective to read, which makes one feel involved with Derek in his adventures. He also transmits the desire to be one of those students and to learn from him in one of his baseball academies in Central Park in New York.

Above all, you feel the excitement at the Olympic Stadium on May 25, 1996, in what will be his one and only presence at the mound at the Stadium.

3. Behind the scenes of the book:

In his anything but ordinary life, reading the lines of his book makes one support his cause – sports or not. Readers will find him strong and humble in talking about the challenges of his daily life since the announcement of his state of health.

Derek Aucoin offers readers fond memories of the Montreal Expos and baseball as a whole, but reminds us of the importance of enjoying life to the fullest and not wasting a second.

“Gratitude. If one word could describe it, it would be this one”, recalls Benoît Rioux. “An important phrase for Derek was: to live is to give and when you give, you receive. It’s simple, but that was it. He still considered himself the luckiest man in the world, even after the diagnosis.”

Initially, the two friends reserved the project for later, for their old age, perhaps. But the diagnosis sped things up. Rioux followed a long writing process, through which the biographer had come to know his subject better than anyone in the world. “Derek called me his catcher. He was throwing lots of stories at me and I had to catch them. “

Today, the title of his biography resonates with him more than ever. “Because he’s up there now. Because to see it, you have to lift your head. Because he would have liked us to smile today, to keep our heads high. “

“There are very few words to express the deep pain and sorrow that lives in us as our handsome Derek left us peacefully surrounded by love,” his wife Isabelle and son Dawson said in a statement.

Derek Aucoin had been fighting for 18 months against glioblastoma multiforme, a cancer “without mercy” which did not prevent him from living “in the gratitude of the present moment as only he could do”.

He held the bar of his sports chronicles until the very end, that is to say till 2020, when his state of health became too unstable to continue.

Before he died, Derek Aucoin watched his 8-year-old son, Dawson, hit his first home run at the Boisbriand field that bears his name. Another dream of his bucket list on which he was able to draw a line, such as throwing the ball to his son in Central Park, told an article in La Presse.

5. At the turn of the 2000s, the star athlete moved into animation and went behind the microphone:

Michel Tremblay, now sports director at 98.5 FM, was the first to offer him a microphone, somewhere between 2005 and 2006. “I always say that in order to hire someone, you have to be a good person, ”he explains.

For this 6’8 ” giant, the job was perfect. “He’s a guy who wanted to improve every day, who listened to his shows in playback to be better the next day. “

After his retirement from sports, Derek Aucoin also went on to become a favorite media personality among baseball fans. In particular, he was a sports columnist for Radio-Canada on the program: Y A Pas Deux Matins Pareils, in Toronto, in 2012 and 2013. Aucoin returned to the airwaves of the Toronto station in May 2020 to present his biography.

6. Big ambitions and a desire to give back:

In parallel with his sports and media career, Derek Aucoin got involved in the community environment. He has organized numerous auctions and taught baseball to hundreds of children in Canada and the United States.

Back in Quebec since 2014, it is above all through radio that Aucoin has reached many people. He was quick to develop a close relationship with his audience and there are many examples.

“I also remember Yvan. It was 2018. The holidays were not going well for him. He was hungry and had nothing to eat. Honestly, I was listening to him on the phone and wondering if he would show up at the end of the night. Personally, I cannot stand idly by in front of someone who needs help. During a break, I called a restaurant to have him deliver chicken and a sugar pie, the typical holiday meal, ”Aucoin tells Rioux in this biography.

Moreover, his positive influence continues during his most formidable fight: that against terrible and rare brain cancer, a multiform glioblastoma, whose chances of survival are very slim.

Such stories that “warm your heart” was written under Rioux’s pen that Derek Aucoin: La Tête Haute, a biography retracing the career of this Expos launcher who became a radio host.

7. André Lachance details how a young Derek Aucoin inspired him:

A native of Lachine, Aucoin pitched two games in the Expos uniform in 1996. He also spent some time in the minor leagues with the New York Mets organization in 1998. Baseball Canada’s Director of Sport Development André Lachance got to know him in his professional beginnings before returning to him after his career.

“I first met him in 1997 and then we reconnected years later when his athletic journey was over and he wanted to give back as a coach. We shared lots of ideas, lots of better ways of doing things for young people, we developed a great friendship from there”.

“He leaves the mark of someone who has shown that it is possible to reach their goals, to reach their goals, to reach their dreams; this is what he leaves to the people around him. I am sure that many of his former players, former players, are very sad and at the same time very happy to have been around him, to have been able to benefit from his advice. This is what he leaves: having shared, having motivated thousands of young people over the course of his career” said André Lachance.

Later, when Aucoin was inducted into the Quebec Baseball Hall of Fame, he recovered at this point from some of the treatments he had received.”He gave a thunderous speech in which he inspired everyone who was in the room at the time”, André Lachance recalls.

“We were a good group to welcome him, to thank him at the same time, and to welcome him to the Quebec Baseball Hall of Fame, a place he well deserved. It was quite a moment, very touching”.

Derek Aucoin is the baseball player in the minds of many, he is the radio host, but first and foremost, he is a great man. A phrase he liked to repeat was: to live is to give, when you give, you receive. I know for a fact that he marked several people and that he leaves a deep legacy of his passage. Baseball gave him gifts and I think he gave a lot of gifts with baseball, explains Rioux, the biographer of Derek Aucoin.

For Rioux, Aucoin’s long battle with the disease brought out the best in him. Even in the most difficult moments, the former player kept his legendary positivity.

9. He fulfilled his ultimate dream in 1996, but his destiny was to influence people positively with baseball as a tool:

Through this fascinating story, you will devour the details of his career in the world of baseball including the injustices that punctuated him, you will revel in anecdotes including big names like Robert De Niro, Susan Sarandon, Tim Robbins, Jerry Seinfeld, Cuba Gooding Jr., but most of all you will deduce that he wouldn’t have had such a significant impact if his Major Baseball career had spanned 20 seasons rather than his two games with Expos.

10. During his journey to the highest level of “ball” on the planet, Aucoin discovered an immense passion for teaching:

He devoted himself to it particularly in New York where his reputation as a trainer was all the rage. He notably taught Jerry Seinfeld’s children at their home and this American actor had him in such high regard that he wrote a letter of support for the application for permanent residence in the United States filed by Aucoin.

In 2009, the former right-handed pitcher was invited, all expenses paid, to Japan to share his methods with Japanese coaches fascinated by the progress made by one of his students, Ari, by his side. The father of this young man was none other than an advisor to Barack Obama.

In conclusion, the mark Derek Aucoin is leaving behind him goes way beyond the baseball field.

Insight into match preparations to help you optimize your match performance