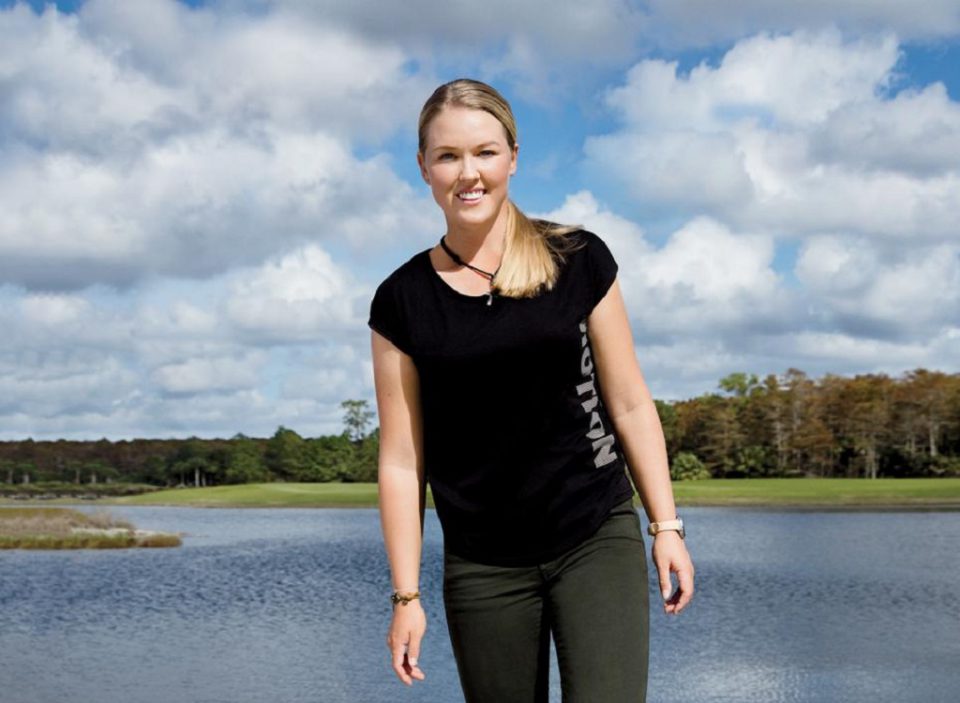 Brooke Henderson born on September 10, 1997, in Smiths Falls, Ontario, is a Canadian golfer. In December 2015, she received the Bobbie Rosenfeld Trophy, awarded by the Canadian press, honoring the Canadian athlete of the year. She’s a Canadian national treasure and here are some interesting things to know about her!

2. In April 2021, she won her 10th career LPGA Tour tournament at the Hugel-Air Premia LA Open:

This added to her record for the most professional wins by a Canadian golfer.

In June 2019 at the LPGA Meijer Classic, she became the highest tournament-winning professional golfer with her ninth career victory. In 2018, she took home the Canadian Pacific Women’s Open, and immediately became the first Canadian to claim the Canadian Women’s Championship since 1973! In 2016, her victory at the 2016 KPMG PGA Women’s Championship saw her become the first Canadian athlete to win a major women’s golf tournament since 1968. At the age of 18 years and 10 months, she was the second youngest winner of a major tournament and the youngest in the tournament since 1955. She rose to second in the world golf rankings, the best result for a Canadian athlete (male or female).

3. Brooke Henderson was the top Canadian in sport’s return to the Olympics:

After a 112-year absence, she finished tied for seventh at the Rio 2016 Games tournament.

4. She is the first Canadian LPGA Tour winner since Lorie Kane, in 2001:

Brooke Henderson received her LPGA Tour membership card and was able to make her official Tour debut at the Canadian Pacific Women’s Open. She went on to receive the Bobbie Rosenfeld Award for Female Athlete of the Year from The Canadian Press.

In September 2014, Brooke became the first Canadian to lead the world’s best amateur golfers. With over 50 wins, she became a professional golfer in December 2014. Brooke achieved her first professional tour win at the Four Winds Invitational tournament in June, becoming the third-youngest ever winner on the Symetra Tour. Her application to join the Symetra circuit before his 18th birthday was accepted right after his victory. Subsequently, she placed fifth in the US Women’s Open. After qualifying, she won her first LPGA Tour title (by eight strokes) at the Cambia Portland Classic in August, a title she defended brilliantly in 2016.

2014 was the year she became a professional golfer but before that when playing at the amateur level in 2014, Brooke tied for 10th place to qualify for the 2014 US Women’s Open, which saw her compete in two major tournaments in 2015: the United States Women’s Open and the ANA Inspiration Championship.

She won two tournaments on the Canadian women’s circuit, including one in 2013 when she was 14 years old, nine months and three days old, earning her the title of the youngest athlete (male or female) to win a tournament. professional level. She also won the PGA Championship of Canada in 2014. Brooke captured silver for Canada at the 2014 World Amateur Team Championship and finished second at the 2014 US Women’s Amateur Championship. She placed fourth at the World Junior Girls Championship in 2014.

6. This is how she got started:

She started playing golf at the age of three because she wanted to accompany her father and older sister. At first, she thought the goal of the game was to get the ball into the cup as quickly as possible and she was running on the field to hit as many balls as possible instead of hitting less often, but more precisely.

She always dreamed of playing for the professionals and at the age of 14, her goal became clearer when she won her first professional tournament.

She had considered enrolling at the University of Florida, but instead decided to start her professional career. To relax, she enjoys watching movies and playing hockey as a goalie. Before participating in a tournament, her favorite meal is an omelet with peppers, ham, tomatoes and a bowl of fruit. Her guilty indulgences are pizza, chocolate cake, and chocolate ice cream.

8. The COVID-19 pandemic forced her to be absent from the LPGA:

The British Women’s Open at the Royal Troon Old Course in Troon, Scotland was her first official tournament since a seven-month hiatus which is, according to the principal concerned, the longest of her career in competitive golf since her days in elementary school.

Accustomed to a frantic pace of nearly 30 tournaments per season, Brooke Henderson only played 10 last year, due to the pandemic. The 23-year-old Ontarian still saw a bright side at an idle pace.

“The breaks between tournaments changed the way I prepare a bit,” said Henderson. I learned to balance my energies to still succeed in playing well. “

Henderson finished seventh in the Circuit Championship shortly before Christmas, then spent the holidays at home with her family. There was no shortage of snow at Smiths Falls and combined with the required isolation, she trained little.

Ranked sixth in the world, Henderson finished in the top 10 six times last season. “I’m very proud to be in the top 10,” said Henderson. Right now, my goal is not to try to become number 1.

“Of course I would like to move up the standings, but I’m going one tournament at a time. If I get the chance to fight for number 1, I’ll do my best for sure. “

“It’ll be fun. It’s been a while since I felt this kind of adrenaline rush. I can not wait, “said Henderson, who planned to be absent from the LPGA portion of the schedule in Australia, and was reluctant to take part in the Asian portion due to the COVID-19 pandemic.

“I was happy not to be taken in there and then things just got off the ground after that,” said Henderson. All of this is very unfortunate, but at the same time, there are positive lessons to be learned.

“My family is healthy, and I hope it stays that way, and I was able to do things that I usually never have time to do,” she added.

This stoppage period sent Henderson tumbling outside the world top-10.

9. Nonetheless, Brooke Henderson started the US Open on a high note:

Brooke Henderson completed the first day at -3 and was only one stroke behind the leaders, the American Megha Ganne and the English Mel Reid.

The Canadian was in the first rung after 17 holes, but she put three putts on the 18th pennant to slip to -3 on the course of the Olympia club.

The day, however, was Ganne’s business. She handed out a 67 (-4) card to become the first amateur golfer in 15 years to share the lead in this major tournament.

10. The Henderson sisters got separated for the first time since 2016:

For the first time since the start of 2016, Brooke will be separated from her older sister Brittany who did not make the trip. It’s a work permit issue. A former Quebec incumbent in the junior ranks, Brittany is now married to an American Zach Stepanik is from the communications department of the LPGA. The papers have to be redone since the couple is installed in Naples, Florida, instead of being simply renewed, which causes the delay in wishing that it does not stretch too much.

Brooke Henderson added to her impressive collection of honors by receiving the inaugural People’s Choice Award from Canada’s Sports Hall of Fame. This award was created to “Recognize future Hall of Fame members who are champions of their sport and their community. “

Henderson is a strong advocate for charity and community involvement, playing an important role as an ambassador for the CP has the heart campaign for Canadian Pacific. At the 2019 CP Women’s Open in Aurora, Ont., She headlined a fundraiser that raised $ 2.2 million for the SickKids Foundation. She has also participated in numerous clinics and charity events throughout the year.

12. She also won the Founders Award at LPGA Gala:

Comfortably dressed in a flowery jumpsuit and with her parents in attendance, Brooke Henderson added another honor to her collection of trophies. The Founders’ Award is a distinction that was renamed in 2019.

Henderson told golfcanada.ca that the honor was “extra special” as the award winner was voted on by female golfers on the LPGA Tour. The award is presented each year to a golfer “whose behavior and actions best exemplify the spirit, ideals and values ​​of the LPGA.”

A nine-time winner on the LPGA Tour, she says she discovered that she was among the nominees at an LPGA players’ meeting, and that they were the ones who elected her was “pretty crazy.”

“It means a lot (to me),” said Henderson. “I spend so much time with these girls that it is truly a great honor to receive the Founders’ Award. “

“To be evoked in the same breath as them… their passion, their perseverance and what they have accomplished with this circuit is extraordinary. It’s really cool for me. “

Before this, she became the first Canadian golfer to win an ESPY (“Best Female Golfer”) award and she won the People’s Choice Award from Canada’s Sports Hall of Fame – a new award designed to honor “future members of the Pantheon who are heroes in their sport, but also heroes in their community. “

“This year has been really crazy in terms of the honors (that I have received). I wasn’t expecting any of them, ”says Henderson while displaying that eternal smile. “To have received these awards, it’s just amazing. I am honored, touched… and it’s an incredible feeling. “

The Smiths Falls golfer from Ontario has become a real driving force in inspiring young golfers across the country. Many young girls wear visors and ponytails just like Henderson strolling near the course. Brooke Henderson says she is well aware of her role and is happy to have the opportunity to be an inspiration, not only because of her record-breaking performances on the golf course but also off the course.

Minimum Wage BC: What Are the New Minimum Wage Rules for British Columbia and Other Canadian Provinces?