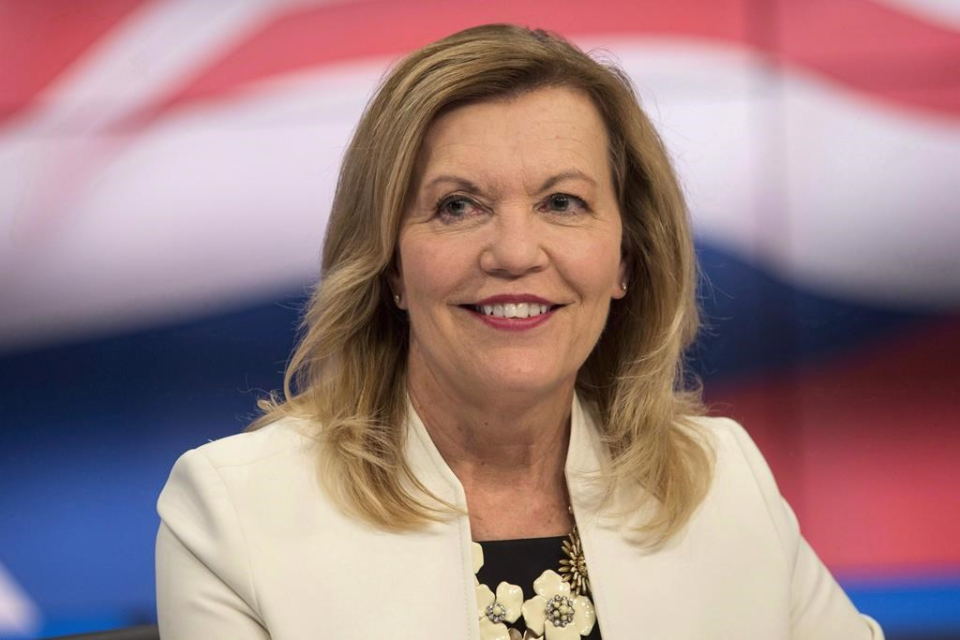 Christine Elliott came into this world as Christine Janice Elliott (her full name) on April 13, 1955. As of 2021, she is a Canadian politician in Ontario who is serving as the 11th and current deputy premier of Ontario and Ontario minister of health since June 29, 2018. Here are 15 facts about her that most people consider fun to read!

How else will you get to know about Canada’s Honorable Ontario Minister of Health and Long-Term Care when you’re stuck in stay-at-home order and have nothing else to do!

Christine Elliott was born in Oshawa and grew up in Whitby.

She started off her career as a bank auditor:

Ms. Elliott was called to the Ontario Bar in 1980 but she began her career as a bank auditor for one of Canada’s largest banks. She was a founding member and partner of the Whitby law firm Flaherty Dow Elliott & McCarthy, where she practised in real estate, corporate/commercial, and estate law.

Marriage and having triplets:

Ms. Elliott was married to former Finance Minister Jim Flaherty with whom she had triplet sons John, Galen, and Quinn in 1991. Until Jim Flaherty’s death on April 10, 2014 she lived in Whitby with her sons till 2015 when she moved to Toronto to be closer to her job as Patient Ombudsman. The couple’s son Galen, used to work for Doug Ford, then Etobicoke councillor.

Elliott and former Finance MinisterJim Flaherty have both championed issues surrounding disabled children; their son, John, has a disability.

Her hometown Whitny influencing her decision to step into the political realm:

Christine Elliott who grew up in Whitby, attended what is now Florence M. Heard Public School and later Anderson Collegiate. She spread her wings after completing her studies at the University of Western Ontario to practise law in Toronto. It was there that she met Jim Flaherty, now Whitby-Oshawa MP and federal finance minister and the pair married in July 1986.

Ms. Elliott, who grew up in Whitby, moved back to her hometown to start a life together.

Ms. Elliott fondly reflects on her early years in Whitby, which she remembers as a distinctly small-town type of community where visits to the County Town Carnival and Brooklin Spring Fair still stand out as some of her favourite childhood memories.

“Whitby has been able to maintain a lot of that smaller town, community feeling even though it’s grown tremendously and I think that we really need to try very hard to try and maintain that because I think that’s what appeals to a lot of people when they choose Whitby as their home,” she says.

It’s that small-town atmosphere where neighbours bend over backwards to help each other that has molded the current Minister of Health’s values when it comes to public service. Such values consequently influenced her decision to step into the political realm, she added.

It comes as no surprise that Elliott received Whitby’s Peter Perry Award, an annual recognition of Whitby’s outstanding citizens.

An accident at her cottage left the current Ontario Minister of Health with a broken temporal bone at the base of her skull and saw her hospitalized for more than 45 days! She had to undergo months of rehabilitation to fully regain her ability to walk and speak.

“It struck me that I was sworn in on June 29 and it was June 30 last year that I had my accident….“Within a year … I feel very fortunate to be able to do this job and I really am very grateful to all the health-care professionals,” she said in an interview.

Elliott’s head injury happened when she was alone, she almost died:

Ms. Elliott’s accident occurred in the middle of a rainy night when she went to check whether any water was leaking into the Haliburton cottage, which was still under construction. A step on a temporary staircase gave way, flinging her hard against a wall.

The force of the impact fractured her skull and knocked her out. She lay unconscious on the floor until she was found the next morning by her sister.

I was literally a bloody mess. I had a huge black eye,” she said.

Elliott didn’t remember anything about the ordeal:

The current Ontario Minister of Health, Christine Elliott, has since learned about what rough shape she was in. An ambulance took her to Haliburton Highlands Health Services, but had to break on the road twice because her vital signs were unstable and paramedics needed to work on her in a stable vehicle.

From the hospital, Christine Elliott  was taken aboard Ornge Air Ambulance to the trauma unit at Sunnybrook Health Sciences Centre. She spent four days in intensive care.

By the end of her hospital stay, she was running on Bridgepoint’s outdoor track:

“I could hardly walk. I was on a walker for the first week,”Christine Elliott recalled.

The current Ontario Minister of Health said the most challenging part of her recovery involved speech-language pathology therapy: “I had a real difficulty retrieving words and speaking in full sentences. I had a lot of pauses and word recall was really difficult.”

When the accident occurred, she was about a year into her profession as Ontario’s patient ombudsman, a career that saw her advocate on behalf of patients who had complaints about the health system.

Her vocation  required much public speaking and Elliott was concerned about returning to work: “I was worried about it because that is what I did as a patient ombudsman … meeting with people, giving presentations about the office, both to patient groups and health-care professionals.”

Elliott had been twice elected to the Legislative Assembly of Ontario:

This was a role that has propelled her into the spotlight. With two of her boys venturing off to university in 2009, she thought the time was right for her to step up to the plate in a bid for leadership of the party.

She acted as a champion for a variety of causes, including breaking down barriers for people with special needs:

The current Ontario Minister of Health became the co-founder and director of the Abilities Centre (a facility for those with special needs), a director and past chair of Grandview Children’s Centre and a director of the Lakeridge Health Whitby Foundation. Ms. Elliot was also the board president of the Durham Mental Health Services (DMHS), which named one of their group homes in her honour (Elliott House). She is a director of Legacy Private Trust in addition to being director of the Leukemia & Lymphoma Society and the Toronto Symphony Orchestra.

Her fervent efforts toward establishing the Abilities Centre, a fully-accessible recreational facility to be located in Whitby, have not gone unnoticed across the region.

A long-time friend of Ms. Elliott, Conservative consultant Jaime Watt, describes her as “one of the special people in life” ….”She’s a lawyer, she cares about vulnerable people, she’s a mother, she’s been elected twice (and) she understands the complexity of Ontario,” he stated.

She was a very successful lawyer before entering public life:

Ms. Elliott was a founding member and partner of Whitby, Ontario law firm Flaherty Dow Elliott & McCarthy where she was able to practice real estate, corporate and estate law.

Ms. Elliott was lauded for her pro bono work as she had previously worked for the Office of the Ombudsman of Ontario and Law Society of Upper Canada.

She always wanted to be a politician:

According to a Toronto Star feature published after her husband Jim Flaherty’s death, Elliott and her husband debated as newlyweds which one would put their name on a ballot. Yet, her ambitions were put on hold after she became pregnant with triplet sons.

“We did talk about that, who would run — she would be the more attractive candidate,” husband Jim Flaherty said in one interview.

Jim Flaherty would be the first to jump into the political arena in 1995, serving at Queen’s Park for several years before making the leap to federal politics in 2006. He would go on to become federal finance minister, a position he retained until shortly before his death in 2014. Only years into the marriage, once her kids were older, did Christine Elliott win office herself, and begin rising through the ranks of the Progressive Conservative Party of Ontario.

The current Ontario MO Health once defeated a political veteran and former MP to win her spot at Queen’s Park:

But Ms. Elliott’s victory in the riding of Whitby-Ajax was no walk in the park. Elliott defeated Judi Longfield, a Liberal MP for the area from 1997 to 2006, who was bested by former Finance MinisterJim Flaherty that January.

She was victorious that year by about 1,300 votes. In the election this month, Christine Elliott won by a whopping 10,000 votes.

The current Ontario Minister of Health once finished third in the race to replace former Ontario PC leader John Tory in 2009, behind Hudak and former MPP Frank Klees.

Elliott was awarded endorsements from several federal cabinet ministers and Ontario MPPs but Hudak was the clear front-runner throughout the race. The current Deputy premier of Ontario since 2018 presented herself as a centrist voice and was highly critical of Hudak’s vow to scrap Ontario Human Rights Tribunals.

“If we go down this path and we start taking away the rights of vulnerable people, in the next election, we will surely lose,” she said at one debate.

Becoming the deputy leader of her party:

Christine Elliott has held a number of important roles in the PC shadow cabinet and became the deputy leader of the Opposition. The current Ontario Minister of Health once said that her experience as deputy leader has given her “a greater depth of knowledge” than she had in her last run for leader.

She has been the Deputy Premier of Ontario since 2018  also serves as her party’s critic for health and citizenship and immigration. Previously, she served as the critic for the Attorney General.

When Liberals released an attack pamphlet featuring a Photoshopped image of Hudak laughing as a hospital exploded behind him, Elliott rushed to his defence. Elliott commented that the flyers were a deliberate, “sickening” attack meant to frighten voters into voting for the Liberals.

Is Forex Trading Gambling? The Answer is Not What You Expect

Spruce Up Your Site: Both Indoors And Online Like Patrick Morin