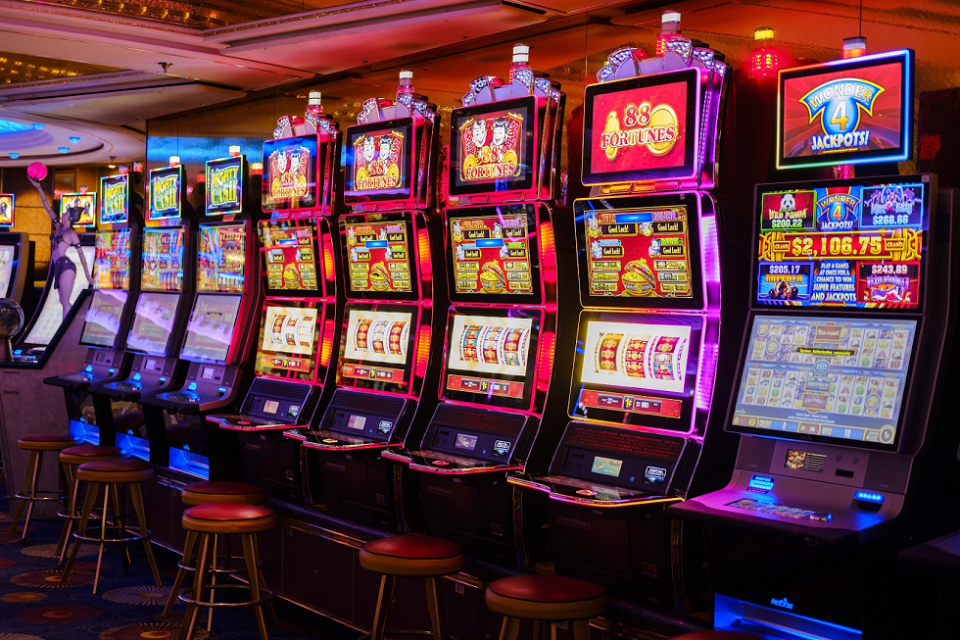 A slot machine is a kind of gambling device that presents its players with a fun game of chance. This machine has some other names across the globe as well. It’s known as a fruit machine, puggy, the slots, poker machine/pokies, fruities and slot. Some people pejoratively refer to slot machines as “one armed bandits” as well. This name was given because of the large mechanical levers attached to the sides of early mechanical machines coupled with the fact that many people used to empty their pockets playing on slot machines. While there are multiple variations in a slot machine design across the globe, a “standard layout” consists of a screen displaying three or more reels that “spin” when the game is activated. Even though we have come a long way since the “one armed bandits” days, a lot of modern slot machines still use a lever as a skeuomorphic design trait to trigger play. However, the similarities end on the surface, the old mechanism has been replaced with random number generators, and the majority of the world’s slot machines are operated using buttons, and touch screens (or mouse and keyboard if you play online). Slot machines consist of currency detectors that validate the form of payment, whether coin, cash, voucher, or token. Once the player “spins the reel”, the machine pays out based on the pattern of the symbols on the screen once the reels finish spinning. As far as casinos go, slot machines are their biggest source of income, contributing over 70% of an American casino’s income. The advent of the digital age has also led to a sea change in slot machine technology. Digital slot machines are essentially video games and they allow manufacturers to offer exciting, interactive elements, including advanced bonus rounds and more varied video graphics. Let’s find a little more about slot machines and slot games.

Why are slot machines called so?

The term “slot machine” comes from the slots on the machines where players insert coins. The other term “fruit machine” is a result of the popular fruit images such as cherries, grapes and lemons that appear on the spinning reels of the slot machines.

How were slot machines designed?

According to Wikipedia, Sittman and Pitt of Brooklyn, New York built up a machine for gambling in 1891 that was an antecedent to the slot machine we know and love today. It contained five drums holding a grand total of 50 card faces and depended on poker. The machine went on to become a fan favourite and pretty soon, became a staple in just about every bar of the city. Players would drop a nickel into the “slot” and pull a switch, which would turn the drums and the cards that they held. The players would expect a decent poker hand. There was no immediate payout instrument. If players got a pair of kings, they might get a free beer while a royal flush might have resulted in the restaurant covering all the charges for the smoking and drinking. Essentially, the prizes from a slot machine depended on what the place had to offer. The drums could likewise be modified to additionally lessen a player’s possibility of winning.

In view of the massive number of winning possibilities in the first poker-based game, it ended up being extremely difficult to make a machine equipped for granting a programmed payout for all conceivable winning combos. However, necessity has always served as the mother of invention and between 1887 and 1895, Charles Fey of San Francisco, California formulated a lot less difficult programmed mechanism with three turning reels containing an aggregate of five images: horseshoes, jewels, spades, hearts and a Liberty Bell; the bell ended up giving the machine its name. By supplanting ten cards with five images and utilizing three reels rather than five drums, reading and deciding winning combinations became a lot more straightforward, permitting Fey to plan a viable programmed payout instrument. The “jackpot” was three bells in a row, paying out ten nickels (50¢). The Liberty Bell proved to be extremely popular and led to a revolution in the industry. Following a couple of years, the gadgets were prohibited in California, yet Fey actually was unable to supply enough slot machines to keep up with the incredible demand. Needless to say, slot machines were a blockbuster hit. Many manufacturers copied the design. In 1907, Herbert Mills created his own version of the slot machine and called it the “Liberty Bell” like the original slot machine. Within a year, most cigar stores in America had a “bell” themed slot machine. They could also be found in cantinas, bowling alleys, brothels and hair stylist shops. Early machines, including an 1899 Liberty Bell, can be found in the Nevada State Museum’s Fey Collection.

How does a slot machine work?

While the exact operations of a slot machine may vary among different designs, there are some basic machinations that are common across different slot machines. The player can embed cash or, in “ticket-in, ticket-out” machines, a paper ticket with a standardized tag, into an assigned opening (“slot”) on the machine. The machine is activated with the help of a switch or catch (either physical or on a touchscreen), this activates the reels and they rotate and eventually come to a stop, revealing a particular pattern. In case the pattern is that of a winning combination, the player receives a payout depending on the paytable. Images shift contingent upon the topic of the machine. The most common images on modern slot machines incorporate items like organic products, ringers etc. Slot games usually carry a theme as well. These themes could range from anything from food to cartoon characters. A few themes are authorized from well known media establishments, including films, TV shows (even game shows like Wheel of Fortune), performers, and artists.

Is gambling on a slot machine really random?

Yes. It is completely random. Whether you play virtually or physically, slot machines use a random number generator (RNG). This is a computer-run program or algorithm that (as the name suggests), chooses numbers randomly. The numbers are connected to symbols and the reel stops when the symbol is chosen.

Can you play slots for real money on your phone?

Yes. Many casino slots are available online and on mobile phones as well (for both Android and iOS).

Can and do casinos change the payout on slot machines?

This varies based on the casino, jurisdiction, type of machine, etc. With the machine, it could be as straightforward as altering the weight on the reels or swapping out a chip. In one of these cases, the casino could alter the payout. This involves a lot of paperwork, including reporting the changes to gaming authorities.

What is the difference between a class 2 and class 3 slot machine?

This is what The Daily Mail says about this:

“In the UK, manufacturers claim most machines are set at 95 percent but many pay out less – as low as 70 percent in certain pubs and at motorway service stations, where the odds are worst of all; the transient clientele will not be around long enough to realise what an ungenerous fellow their fruit machine is.

A row of them in the corner of a UK pub will often make a landlord more money than the beer sales. In the US, games must pay out no less than 75 percent by law. In the UK, there is no minimum payout; simply an obligation to print somewhere the payout percentage.”

Is there a secret to winning jackpots?

No, as discussed earlier, slot machines work with the help of a random number generator. Regardless of numerous “expert tips” and “slot hacking tutorials”, a slot machine’s outcome can’t be controlled by players, and winning on it is pure luck.

Is it legal to own a slot machine in the US?

Which slot machines have better odds?

What is the highest denomination of a slot machine?

Are slots a stupid thing to play at casinos?

As long as you are not addicted to it or plan to use slot machines to generate livable income for yourself, you will be just fine. Just use it as a way to have fun and spend some time at a casino, Don’t get too attached to it.

How do you win at slots in Las Vegas?

Just by getting lucky. Aside from luck, the odds are totally stacked against you. These casinos don’t generate millions of dollars in profit by letting players win easily. All machines are set to payout between 75-99 percent and that still leaves 1-25 percent profit for the casinos.

Is there a ‘best’ time of the day to play slot machines?

No, the payouts for slot machines don’t change with time and you can play at whatever time is convenient for you. Your odds at winning will stay the same.

Top Trending Apps For Your Smartphone

Best Casino Games to Make Yourself Some Money