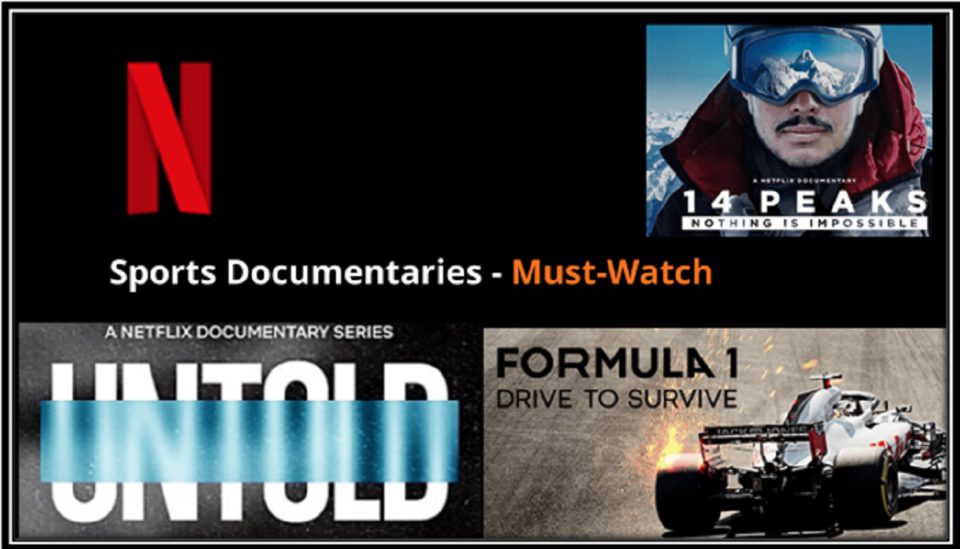 Sports events and activities are a fantastic way to re-energize, gain inspiration, and break down mental boundaries.  “You Miss 100% of the Shots You Don’t Take,” Wayne Gretzky once stated. We are encouraged and endeavor to achieve our life goals due to such sports enthusiasts.

Watching Netflix documentaries is another excellent source of motivation. The SVoD has a plethora of fantastic sports documentaries, including cricket, wrestling, skiing, squash, football, hockey, tennis, boxing, basketball, and others, including the world’s best athletes, teams, races, and controversies.

However, Netflix distributes different libraries in each country. It means, you may encounter a situation where you hit on playing a favorite documentary title but it is locked in your location. Stay cool, anyone can unblock such videos from the staying place by using an online geo-spoofing technique.

It clarifies that we can stream desired Netflix content from any corner of the world. It is possible due to advancements in technology, and innovation that brings smart streaming solutions to evade Netflix geographical restrictions.

Further, if you are a sports enthusiast, check out the following 5 Netflix sports documentaries that will enlighten your mind, body, and spirit in 2021!

Untold on Netflix is helping us to maintain our Olympic spirit high by presenting a new narrative every week that takes a fresh look at a well-known sporting incident or scandal. However, one episode every week is insufficient to satisfy our athletic cravings!

Thankfully, the streaming platform provides a slew of sports documentaries and docu-series for us to binge-watch. At the same time, we continue to root for Cinderella teams, underdog athletes, and the big names we know and love.

Such documentaries explore the scandals that sought — and failed — to undermine the sports we all love, while titles like Rising Phoenix and The Dawn Wall applaud persistence.

2. 14 Peaks: Nothing is Impossible

This sports documentary explores Nepal’s deep connection to high-altitude mountaineering through the eyes of Nirmal “Nimsdai” Purja, a fearless and fun-loving. A Nepali climber on a quest he dubs “Project Possible”—to summit all 14 of the world’s 8,000-meter mountains in just seven months.

This sports documentary is breaking all the previous hit record of seven years. He climbs Mount Everest, K2, and other renowned peaks with a team of trained Sherpas, despite terrible weather, life-or-death decisions, and the emotional weight of his mother’s illness back home.

14 Peaks is an exciting, action-packed content about bravery, perseverance, and pushing human endurance to its extremes. Are you ready for an adventurous content with spice of thrill with an attitude of do or die.?

Formula 1: Drive to Survive is a Netflix and Formula One-produced documentary series that takes a behind-the-scenes look at the drivers and races of the Formula One World Championship. This is most demanding and has a huge fan following in the world.

It covers numerous seasons of the FIA Formula One World Championship. You will keep biting your nails with the thrilling scenes and suspenseful moments in this documentary. It is a must-watch sport documentary on Netflix to add on a preferred watching list.

4. Sunderland Til I Die

Highlights Sunderland citizens’ unwavering devotion to their favorite football club, taking viewers through the highs and lows of SAFC’s 2017-18 Championship season following its relegation to the previous season.

The documentary Last Chance U: Basketball is about a group of dynamic young men from East Los Angeles who set out to become professional basketball players. These young athletes were guided by strong believers and sports leaders to reach new heights in their athletic careers.

Last Chance U should be on your radar if you enjoy football night tournaments. The film is based on a collegiate football game that took place in the United States. It follows outstanding athletes with significant issues who turn to minor college football games in the hopes of changing their lives.

Sports documentaries are mostly loaded with success tales in which one person wins and the other loses, but it is uncommon to see individuals who lose and challenge themselves to win in future competitions. The above guide will lead you to documentaries that will infuse new life into your mind and soul, allowing you to achieve the ideal winning mindset.