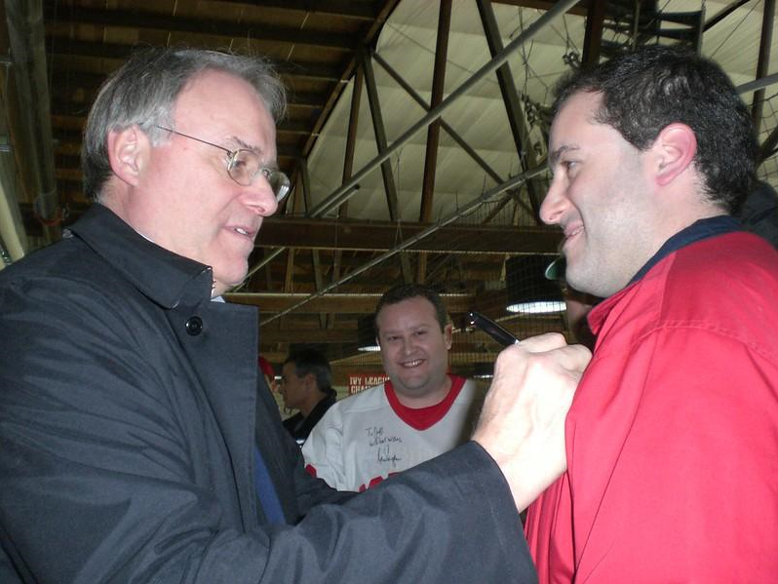 For any elite athlete, to reach the top of their profession is a rare and unique achievement. If this were to be viewed in terms of a sports bet, the odds of making it as a professional athlete would be astronomical.

Now, take under consideration what the following athletes have proven able to achieve during their lives. Not only did they ascend to the ultimate of their chosen sport – and in many cases, go on to be Hall of Famers – but they also accomplished another feat that few prove able to obtain. They all won election to the Canadian federal government and served as Members of Parliament.

Let’s take a look at the cream of this crop, seven superstar athletes who also shone on the political stage.

Van Koeverden was a four-time Olympic medal winner in kayaking. He won the gold medal in the K-1 500-metre category at the 2004 Athens Summer Games. He also was a two-time world champion, earning eight world championship medals during his paddling career.

Running in the riding of Milton, Ont. for the Liberal party in the 2019 federal election, van Koeverden easily defeated incumbent Lisa Raitt, the Conservative Party deputy leader. He won 51 percent of the vote, compared to 36 percent for Raitt.

During Dryden’s eight-season NHL career with the Montreal Canadiens, the Hall of Famer won six Stanley Cups, five Vezina Trophies, a Calder and a Conn Smythe Trophy. He was named one of the 100 greatest players in NHL history.

Dryden served as Liberal MP for York Centre from 2004-11. He staged an unsuccessful bid for the Liberal Party leadership in 2006.

The Big Train, as Conacher was known, was voted Canada’s athlete of the half century in 1950. He’s a Hockey Hall of Famer who won two Stanley Cups as a defenseman. He also won a Grey Cup and is enshrined in the Canadian Football Hall of Fame.

As well, Conacher is a member of the Canadian Lacrosse Hall of Fame, and the Ontario Sports Hall of Fame. The Canadian Press annually presents the Lionel Conacher Award to its male athlete of the year.

From 1949-54, Conacher served as the Liberal MP for the Ontario riding of Toronto Trinity.

Jelinek competed for Canada in pairs figure skating, partnered with his sister Maria. They won the 1962 world championship. The Jelineks are enshrined in Canada’s Sports Hall of Fame and the Skate Canada Hall of Fame.

Jelinek served as a Conservative MP from 1979-93. He was a member of Prime Minister Brian Mulroney’s cabinet, serving in several portfolios over the years.

Kelly’s NHL career was unique. Playing defense for the Detroit Red Wings, he won four Stanley Cups and was the first winner of the Norris Trophy as the NHL’s top defender. He also won a pair of Lady Byng Trophies for gentlemanly play, Traded to the Toronto Maple Leafs in 1960, Leafs coach Punch Imlach shifted Kelly to centre. He won another Lady Byng Trophy and four more Stanley Cups.

He also made history by winning election to Parliament as the Liberal member for York West in 1962 while playing for the Leafs. Kelly served two terms as an MP, shuttling back and forth between Ottawa and Toronto as his schedule permitted.

Qualtrough competed as a visually-impaired swimmer at two Paralympic Games. She won a bronze medal at the 1988 Seoul Games and earned a pair of bronze medals four years later in Barcelona.

She won election as the Liberal MP for Delta, B.C. in 2015 and was re-elected in 2019. Qualtrough currently serves as minister of public services and procurement and accessibility.

A bruising NHL defenseman for 11 seasons, McDonald won two Stanley Cups with the Detroit Red Wings and one with the Toronto Maple Leafs. He also won a Mann Cup and is a member of the Canadian Lacrosse Hall of Fame. The Ontario Lacrosse Association presents its leading scorer with the Bucko McDonald Trophy.

McDonald served as Liberal MP for the Ontario riding of Parry Sound from 1949-57. But it was another cause he served in Parry Sound that made him even more famous. McDonald was Bobby Orr’s youth hockey coach.

6 Restaurants In Trois-Rivières That Are Worth Trying!

How to Take Advantage of Free Spins

Great Audiobooks to Check Out