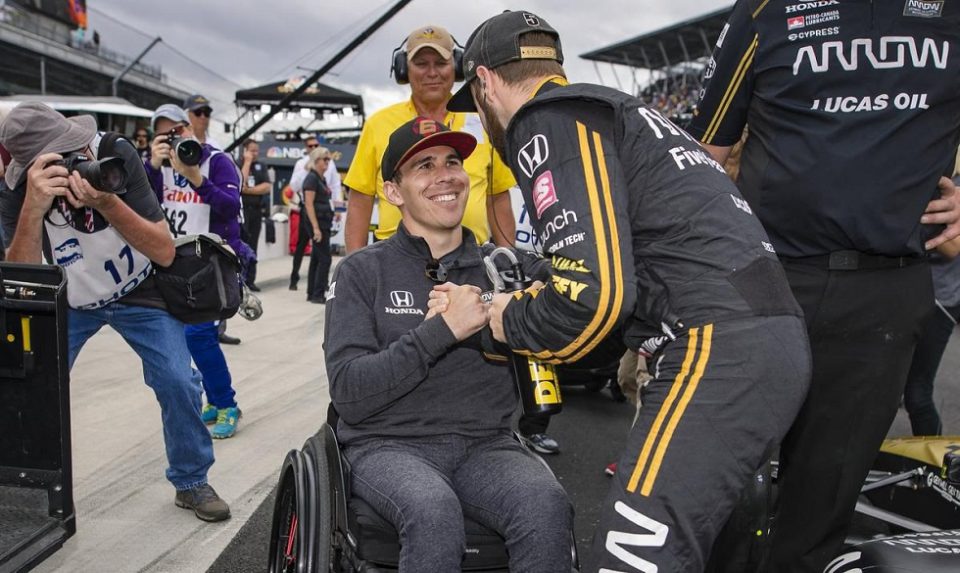 Robert Wickens is a Canadian racing driver hailing from Guelph, Ontario. He raced last for Schmidt Peterson Motorsports in the IndyCar series. His promising debut IndyCar season came to a premature end when a violent crash during the 500-mile race at Pocono left him severely injured. Wickens issued a further statement clarifying that he was hoping to be able to walk again, due to his spinal cord being bruised rather than completely severed and that he had felt ‘some feeling and movement’ back in his legs although the nerves were not in a state to walk. Fortunately, Robert Wickens shared a video of himself walking with the help of a cane in 2019.

Robert Wickens kickstarted his Formula racing career in 2005 at the age of 16. He received a Junior Scholarship from BMW and participated in Formula BMW USA for Team Apex Racing USA. He scored five podiums including two wins, which brought him third place and best rookie’s title.

After four races at the end of the 2007 season, Wickens moved up to the Formula Renault 3.5 Series for the 2008 season, with Carlin Motorsport. He claimed one win at Silverstone and finished the season 12th with 55 points.

Apart from involvement in the Formula Renault 3.5 Series, in 2008 Wickens competed in Formula 3 Euro Series with Signature-Plus, missing the Hockenheim, Mugello and Brands Hatch rounds. His best results came at the second, rainy races on the Norisring and Bugatti Circuit, where he won. Both times, due to insufficient distance covered, half points were awarded. He switched to Kolles & Heinz Union in 2009 and competed during the Hockenheim and Dijon rounds.

Robert Wickens was the sole North American contestant in the 2009 FIA Formula Two World Championship. He drove car number 12. Robert Wickens was masterful in the season’s first race. He started on pole and led the race through every single lap on the way to a dominant victory. In November 2009 Wickens revealed that he had held “off the record” talks with several Formula 1 teams.

On April 3, 2012, Mercedes announced the revival of the Mercedes-Benz Junior Team that has guided several notable drivers in their racing careers like Heinz-Harald Frentzen, Karl Wendlinger, and Michael Schumacher.

Robert Wickens raced for the Schmidt Peterson Motorsports for the IndyCar Series’ Kohler Grand Prix at Road America. He drove the number 7 car during practice in place of Mikhail Aleshin, who had competed in the 24 Hours of Le Mans a week prior and was unable to return to the United States in time for the start of the Grand Prix weekend due to problems surrounding his immigration visa.

It was announced in October 2017 that Wickens would be joining the team full-time for the 2018 season.

Wickens crashed violently during the 2018 ABC Supply 500 at Pocono Raceway on August 19, 2018. After a restart on lap 7, Wickens drew side-by-side with Ryan Hunter-Reay on the run down the back straight into turn 2. Neither driver backed out and they touched wheels, turning Hunter-Reay across the front of Wickens’ car, which as a result then launched Wickens’ car over the nose of Hunter-Reay’s Andretti Autosport machine and into the catch fencing. After hitting the catch fence at a very high speed, Wickens’ car broke upon impact. Thankfully, his safety cell was intact. The car then landed on the ground and slid to a stop on the straight just beyond turn 2. The crash initiated a multi-car pile up which eliminated Hunter-Reay, Wickens’ teammate James Hinchcliffe, Takuma Sato and Pietro Fittipaldi. All were checked out by the on-site medical staff and required no further immediate treatment.

The race was red flagged while Wickens was extricated from the car, with Indycar officials stating he was “awake and alert”, before being transferred to hospital by helicopter. Subsequent reports indicated that Wickens was admitted to Lehigh Valley Hospital-Cedar Crest with fractures to his legs, spine and right forearm in addition to pulmonary contusion. After an MRI scan, Wickens underwent spinal surgery to repair a thoracic spinal fracture on August 20; titanium rods and screws were inserted in his spine. Further surgeries were completed to treat fractures in his arm and legs. On August 31, Wickens was transferred to Indiana University Health Methodist Hospital for further surgery on his legs. On September 7, 2018, the Wickens family announced the full extent of Robert’s injuries: a thoracic spinal fracture, a neck fracture, tibia and fibula fractures to both legs, fractures in both hands, a fractured right forearm, a fractured elbow, four fractured ribs, a pulmonary contusion, and an indeterminate spinal injury. While at a rehab facility in Colorado, Wickens revealed in late October he was a paraplegic as a result of the crash.

Several factors helped Wickens survive: he ducked down so his head did not hit any solid object, the cockpit did not strike the steel pole, and the car tore into pieces as it had been designed to do.

Wickens’ car was withdrawn from the Bommarito Automotive Group 500, while teammate James Hinchcliffe, also involved in the accident, was cleared to race. The No. 6 car did return to the track at Portland with Carlos Muñoz behind the wheel of the car. In a press release on September 6, owners Sam Schmidt and Ric Peterson said: “the 6 is his when he comes back”. The second car was renumbered to 7 for the 2019 season where Marcus Ericsson drove the car.

Despite missing the final three races of the 2018 season, Wickens had already collected enough points to earn the 2018 IndyCar Rookie of the Year award. On 21 November 2018, Wickens published a video of him walking a few steps with machine assistance during his rehab, showcasing the movement of his legs. On 30 January 2019, Wickens published another video showing him riding a spin bike on his own and without any assistance. On 8 July 2019, Wickens announced he would be driving the parade lap for the Honda Indy Toronto, using hand controls. On December 25th, 2019, much to everyone’s delight, Robert Wickens released a video of him walking with the help of a cane.