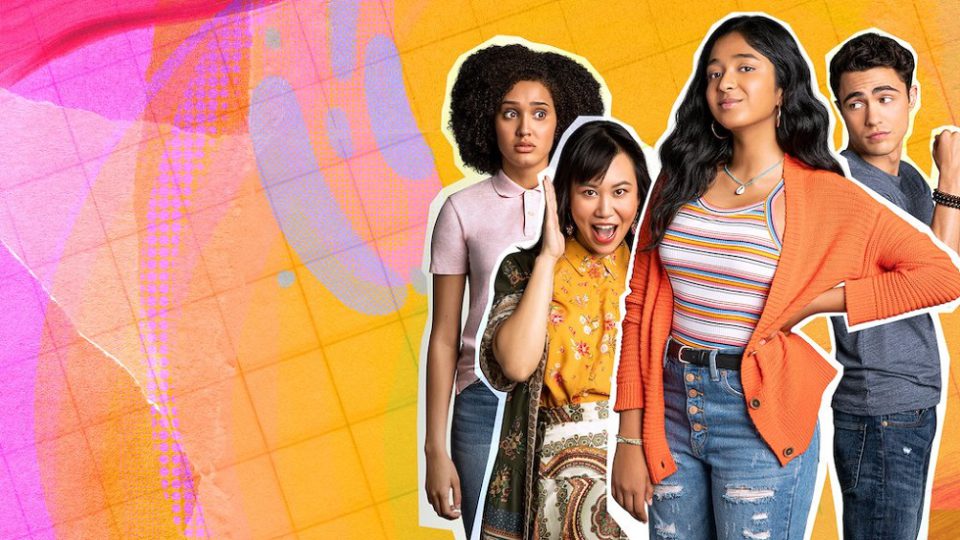 It is the second week of June 2020 and though your half-yearly travel plans for the year may or may not have materialized due to reasons obvious,  however the In-home entertainment quotient on Netflix upcoming shows are wrapping up with all Inclusive Fast and Furious flicks reloaded, Season 2 of Politician, 13 Reasons Why premiers on fourth and final season and so does Season 7 of The 100 and 3rd season of Anne with an E, also sprinkled with huge line up of re-runs beginning with Captain America: Civil War.

The last three months have been tough for all of us. We are all stuck in our homes in a lock down situation.

There is a danger that we cannot see, lurking somewhere outside our front doors. And there is a fear of the unknown, especially what our future will be like.

But the best part is to stay awake for all new and top grossers buzzing in Netflixated sleepless society and embrace the insomnia dolloped popcorn bowls of Chill evenings and cozy nights. A word of caution though hangover remains an all-time favorite.

Why Should I Watch? Real Life Heroism (true story) and original filmmaking turns fact into fictionalized account of real life US Navy SEAL operations, Act of Valor features a gripping story that takes audiences on an adrenaline-fueled, edge-of-their-seat journey like a film into no other seen in Holiday’s history.

Before my father died, he said the worst thing about growing old was that other men stopped seeing you as dangerous. I have always remembered that, how being dangerous was sacred, a badge of honor. You live your life by a code, an ethos. Every man does. It is your shoreline. It is what guides you home. And trust me, you are always trying to get home.

“Sing your death song and die like a hero going home.”

From the scourges of the legendary Hannibal Lecter charade off cult movie classic “Silence Of the Lambs” is twisted tale of genius Criminal profiling teaming up with lecherous cunningly effective yet stupefied into self-glorification of a psychiatrist solving murders in this crime drama.

Why Should I Watch? Bryan Fuller’s wildest series to date inspired by Thomas Harris’ Hannibal Lecter novels invokes a similar evocative viewing experience as Sherlock adaptation by Paul McGuigan, a completely unsettling, throwing a punch at every step adaptation at every turn. Those who haven’t but remember its original home – be shocked as the story drama pulled off by the horror stricken stories which shall awake nightmares through a run of first few episodes. If you supposedly thought that this was just neurological horror while looking at disgust enough serial killers being glamorized as work of geniuses, then you are indicting perspectives and though it is blood soaked ordeal worth of it is sense of unease with trophied bodies being played around with vocal chords grossed as harped strings, insanity strums like a poetry in cinematic action and theatrics. Outlandish Scenes of horrors panned out with voyeurs and foie gras/ Veal pales in contrast to teeth gnashing chilling acts by the ever so dangerous “Hannibal the Cannibal” pouncing and prodding through the victim with a daft precision and perfectionism of surgeon carrying out his work. It is certainly not one to be recommend to strangers with faint hearted.

Dialogue has the multiplicity and inherent double-meaner, with ordinary words taking on sinister resonance, from “the one that got away” to “the devil you know.” “You smoked me in thyme,” one victim remarks, while the seven-course feast is being served for himself.

Another one when Hannibal calls upon the killer, “I love your work” as a sheer inanity of appreciating others work through his own unnerving, uncompromising devilish servings.

Stories of misadventures which runs at the heart of this family. Trivializing, distorting, and ridiculing some of middle-class family norms through its crazy biting humor and stark honest portrayal of the lead character is this animated comedy winning sauce. As the characters tread through animated sitcom that is set in the trailer park suburbs of 70s US. The shows central pivot is an irascible family man who is a Korean War veteran named Frank Murphy. Real reason of Netflix audience is due to the adult content themed around which could not be shown in national television. Even when he is not screaming about his idiotic bosses, he’s howling down at his kids Kevin, Bill, and Maureen to toughen up, or making things up with his screen wife Sue, whose managerial skills are at par of Oprah proportions, and thus pose a threat to Frank’s aging masculinity. “F Is For Family” can be a painstaking lot to skim through and deep dive into, but the hullabaloo around the changing life’s milieu and the overall turns this into an endearing TV Simpson’s like family life which modern family and whole lot of others may not become.

Why Should I Watch? Show has its heart at its right place. Frank is cursing every day waking up, but when he gets summoned by his wife and sons, he loves them albeit resentfully as though the show is a amalgamated series of disappointment, as Frank comes from a life that went off course when he knocked up his wife Sue while he gave up his dreams of becoming a pilot; now works as a manager of operations at the airport. And though the series does brandish a certain, irksome nostalgic view for misogynistic asshole-father types, it is one that every middle class household would relate to on several echelons. If nothing else, the Murphy family dibbles and dabbles will make you feel better about your own lives stuck in quarantine.

F Is For Family Quotes

“I will put you through that fucking wall!”

“I don’t need some bible telling me about God. I almost bled out in Korea, Okay?! I HAVE MET GOD!”

Comedy drama web series whose Central character is Payton Hobart who is being chosen one for the POTA (US presidency) since he turned 17  has to cross through dirty and lecherous political pathways and triumph in an ultra-slick and uber confident though has his own premonitions and refunctions as an alcoholic and singing sad songs who chucks everything when his chums convinced him to run for senate. First season was a slow starter however second season brings in the bustle onto our fledgling statesman on the campaign trail as he tries to unseat Dede, whose re-election was supposed to be cakewalk as he ran unopposed earlier through the voting and though Payton known his secret charade which he could exploit, however fighting his inner demons, he must decide what sort of politician he wants to be. There are major spoilers that his mother Georgina will also make a hastily placed decision that would threatens to upstage him and everything he has accomplished as there are dark undercurrents simmering between every relationship except the reinvigorated one with his ex-Alice, waiting to be seen.

Why Should I Watch?

Unfathomed and Unexpected twists and turns of the rigamaroles of the story come thick and fast in this layered plot, shattering and break away mom, ex-girlfriend and the self-imploding political landscapes are what outsmarts a viewer guess. Life comes head-on with the impressive line-up of star-studded premier season and the best is yet to come on second season.

“I’m not a box. I don’t have four sides for you to look at and approve of…I have feelings. This is the true me. This is who I am. I am a winner… I will not be stopped”.

“Your generation got the terrible idea that it was best to vomit every thought and feeling all over each other. It’s a pandemic of over communication that’s led to an absence of intimacy.”

“The world is dark. And I think teenagers nowadays realize that. I keep thinking that the only thing we all share together is that we are all alone. And we take pictures, and we post them, and we Facebook and Insta and Tweet and Snap, and it just makes it worse.”

Mindy Kaling is a terrestrial force to be reckoned with when it comes to her impressive writing skills be it The Office-The mentor, The 3rd Floor, Subtle Sexuality, The Morning Show OR her Indigenously Mindy project: The Morgan project. Never Have I ever come from the known stable with a personal take on her own teenage times, complicated life of first gen Indian American girl. It stems and buds predominantly from its spry-full tempo, alternating between rollicking and the staccato, precariously capturing, in it’s buddings, the caprices of youth and intricacies of a minority driven Indian culture, exposing it from its within and without with all delicacies of a masala pot-pourri. Be it teenage pangs driven by over-obnoxious and chasing parents for perfect 10s and test scores, while finding her own true self mixing around with race meets diet full of friends, stolen fun and camaraderie. While the delusion and famed delinquencies of American born confused desi (slang ABCD) comes into mind questioning her dusky beauty with intelligence remark, following which a therapist session pouring down her deep dark inhibitions and griefs with spent out frustrations. All in all the story follows adventures of Devi as she negotiates love, hate, confusions and certitudes, loss, friendships and fulminations which sees the girl in full-blown confrontations with her demanding dermatologist mom Nalini and her besties Eleanor a theatre enthusiast, and Fabiola a robotics geek.  All in all this fun, mushy string of missteps does have its heart in its right place and is well endowed with warmth and wit, where the ever brimming smile filled confidence and chutzpah gets her sh*** done.

Why Should I Watch?

Breaks the sterotypical prejudices, stereotypes and deals a heavy blow on conservative tabooed cultural issues (in immigrant societies) on questions about sexual orientations, race, sexual orientation, religion, and more, to loss, grief, torn belief systems but the protagonist owns up to her mistakes and shows that though she is no way  perfect, but is a firebrand as she learns and grows with the non-penchant mistakes she makes and this is great representation in terms of how a teenage show is supposed to be made deriving inspirations from her own life nonetheless, as deep down you root for her.

A big shout out to all the side kicks who are as good as you get, as Devi’s best friends, Fabiola Torres and Eleanor Wong, both nerdy geeks nonchalant to boy’s overtures as they face curveballs that is often hard to keep up. While Fab’s main interest is robotics, Eleanor’s litter love lies in theatre, Then we have her arch nemesis school hottie Paxton Hall-Yoshida who she is in love hate relation as fangirl craving for her attention. With its cute teenybop stories, with right sprinkles of love, angst, despair and coming out of sort, It is absolutely a breezy, effervescent Binge worthy for all the right reasons.

Never Have I Ever Quotes

Whoa Devi, you look like an Indian Kardashian! – Fabiola

Uh, would a not cool person wear… one dangly earring? – Ramona

Now you may be asking yourself why is sports icon John McEnroe narrating this tale? It will make sense later I promise. – John McEnroe

I found a Bollywood movie about a princess who falls for a lowly street sweeper. It is sonly seven hours long. – Kamala

How to Sell Your Home: Ultimate Guide