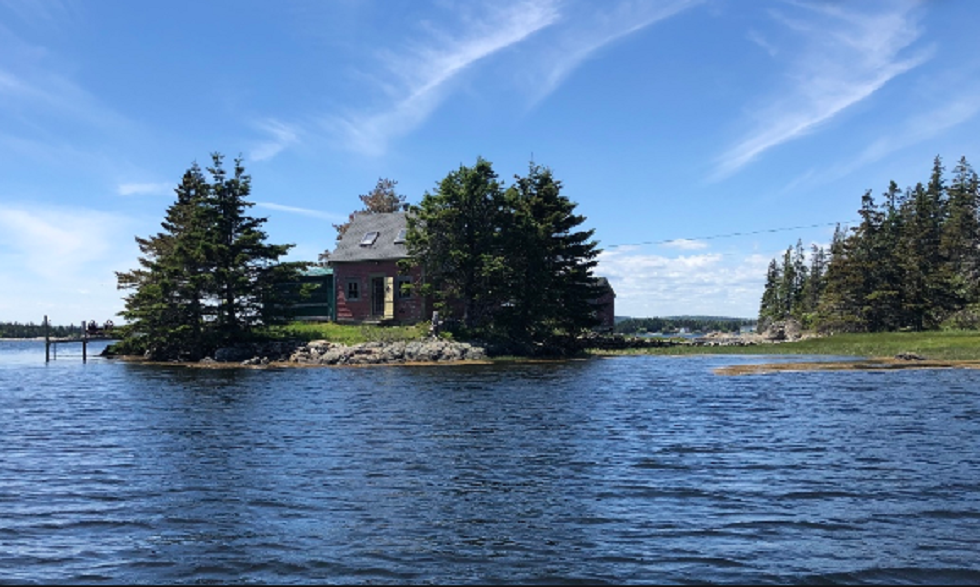 Wolfe island is located at the ingress of the Saint Lawrence River in Lake Ontario beside Kingston, Ontario. The island is one of the several parts of Frontenac County, Ontario and is considered as a township within Frontenac islands. Wolfe island is one of the largest islands in Lake Ontario. The largest community present on the island is Marysville. Wolfe island was originally a part of traditional hunting lands which belonged to Tyendinaga Mohawk people. The island is approximately 18 miles long and width not less than 6 miles. The entire area can be measured around 124 square kilometres. The residential population of the island is about 1400 people that gets doubled during summers.

The actual name of the island is Ganounkouesnot which means a long island standing up. In French, it is called as Grand island or Grande ile. On 1792, the island was officially given the name of Wolfe island by the Lieutenant Governor of Upper Canada after one of the British General named James Wolfe. Samuel de Champion is said to have visited first on this magical island in the year 1615. He was the first white man to note Wolfe island, however, many farms in the island were established later in the year 1820 by Scottish clansmen. Wolfe Island is definitely one of the best places to see in the province of Ontario.

Legend says that when few people were cruising in the islands on a yacht in the 20th century, the steward of the ship found that some of the ingredients of his salad were missing. He used one of the locally grown ingredients present on board beside Wolfe island and created a dressing so impressive which made the yacht owner name the dressing after the region which it originally belonged to. George Boldt, the yacht owner added this recipe to his hotel’s menu, now popularly known as Waldorf Astoria in New York City.

Wolfe island is popularly known as the largest of the world-renowned thousand islands. The island is home to several community groups and service providers that ranges from Women’s institute branches, volunteer firefighters, schools and churches. If you are interested in taking part of any of the service groups, feel free to contact these groups to make their work lighter particularly during summers when the island is filled with many visitors visit the island from all over the globe.

Kingston city is surely rich in culture and history which have made Wolfe island a place of vibrant art, communities and food. According to the city authorities, “We’re a city built on a grand heritage and defined by our ability to blend the beauty of yesterday with the passion and sophistication of today”. Indeed, they host various live concerts and festivals throughout the year including Kick & Push Festival, Busker Rendezvous and Limestone City Blues Festival. The various art galleries, museums and historic places will keep you busy for days as they have everything brimming with international and local talent.

Visiting Farmer’s market and shopping there is another experience shared by many visitors. The market is one of the oldest and continuously run markets present in North America. Many authentic shops and boutiques lay across Princess Street in the city downtown.

If you want to visit Wolfe island, you have to take a ferry ride from Kinston Ontario. The voyage is very short, approximately 15 minutes and proves to be very fascinating while reaching towards the island town, Marysville. The free ferry runs each day starting at 5:45 am till 2:00 am.

Many islanders or visitors remain surprised to see too many things available in such a small piece of land and so many great places to visit, eat and relish upon on Wolfe island. The major attractions include twenty museums. Among all, the icebreaker Alexander Henry and the Marine museum of the Great Lakes are the most popular. The museums provide a very enlightening and fascinating look into the history of the region. Other than this, Fort Henry constructed a foray shore where you can walk on the grounds, take pictures and admire the views. The place looks exactly similar to when the red-coated soldiers built this fort in the mid-19th century when Kingston was regarded as an important town for trade and commerce.

The music festival of the Wolfe island is another popular summer event which attracts thousands of islanders towards it. The grassroots festival takes place in August every year and is popularly known as “a paragon of indie attitude”. So, if you wish to see or visit Wolfe island, you need to plan ahead as the island brings one of the largest crowds in the summertime.

Beaches of the island

The Big Sandy beach can be found right after the ferry reaches the harbour, left on 95 towards the Reed Bay road and right towards the 3rd Line road. This beach is described as one of the largest hidden treasures in the region. Big Sandy beach is one place which is loved by every people of western shore residing in Wolfe island.

This 404-hectare beach consists of an ecological environment that is rare in Ontario. This place is sensitive to the environment due to scientific reasons. Many birds and rare trees flourish here that beautifies the area. The dune complex or beach is 1.3 km long where you can have long walks through woodlands and wetlands to reach Lake Ontario. Visitors can easily interact with nature, enjoy the sandy beach and watch distinctive birds. It can be noted that no motor vehicles are allowed in the protected environmental area though there are sufficient parking provided at the park entrance. The beach itself is family-friendly and safe but no services are provided there which makes many visitors reluctant to go there very often. However, if want to carry your stuff to enjoy them at the beachside make sure that you carry recyclable items to dispose them easily.

Cycling on the Wolfe island of Lake Ontario is one thing which I am being repeatedly told about. The island can be both pleasant as well as exhilarating experience for the cyclists and communities when both of them practice together with the safe riding habits. Many routes are been provided to new cyclists to attempt to keep people on track. Even if it is not available, make sure that you observe every road rule. Especially, while you travel try, to be as far as towards the right of the road and follow traffic laws and signals.

One of the several reasons for Wolfe island being popular for cycling is due to less traffic in the area. It also fulfils the purpose of Kingston people who search for suitable places for making extended day rides as there are no good places for cycling in Kingston. Four routes have been made on the island with the help of colourful signages to make people avoid heavily trafficked zones and to make a peaceful ride in the countryside.

Wolfe island homes various habitats of bird’s species in its woodlands, open fields and wetlands. Some even reside on open bays and cold water. The winters of Wolfe island see owls and hawks such as rough-legged hawks, harriers and snowy owls, especially in the western part of the island. Summers see songbirds, Great Blue Heron, field bird and songbirds while spring welcomes larger flocks of ducks and geese making their way from north and south.

While visiting Wolfe island, you can encounter several opportunities for birdwatching as more than 200 species makes their home on the island during their migrations.  Canada’s Important Bird Areas is one of Canada’s science-based initiatives that take care of the identification and conservation of the rare birds.

Next time you visit Wolfe island, do not forget to carry your binoculars and a good bird guide to enjoy birdwatching. There are few birdwatchers group on the island who welcomes new groups to experience the novice birdwatching.

The freshwaters of the Wolfe island abode many species of fishes, belonging to various sizes and types. The water surrounding the island proves great for anglers as it is filled with a variety of fishes. In the mouth of St Lawrence Seaway, anglers get access to Lake Ontario fish species and the frequent seaways.

In May, anglers can go for Walleye in the waters and in June, Small Mouth Bass provides individuals with plentiful fishes to hook one. The Great Northern Pike looks at the weed beds and the shoals surrounding the water throughout the year. Many elusive predators are present at the pinnacles of the fish food chain. To hunt for a Muskie, you may have to travel for a longer period as they remain hidden at some hideous places.

To do fishing in the Province of Ontario, one must have a fishing licence that can be purchased in the Wolfe island through various establishments. Lake Trout, Rainbows, Brown Trout and Salmon can be caught in the waters of the Lake Ontario. However, you may need to hire a boat and get equipped with special equipment’s since the lake can become very rough even in a short period.

Built-in the year 2003, the Riverfront Golf Course is operated by McCready’s in their heritage farms. The golf course offers some breath-taking views of St Lawrence River. You can see ships sailing and catch a glimpse pf Osprey’s nesting even. Due to the open design and fairways manicured in the 5000 square feet golf course, a golfer enjoys the ground very well. The signature hole number 5 is featured around a beautiful pond beside waterfront lined with flower beds and fieldstones. It looks like one of the best picturesque views among the nine holes designed in the entire area to meet the requirements of golfers.

Over the years, the Wolfe island has provided its visitors with several opportunities to get scenic views, clean environment and exclusive experience. The association also provides with several events such as Chili Fest, Plowing match, photo contest, music fest and many more. So, next time you plan to visit Lake Ontario, do not forget to keep events of Wolfe island in the list if you seek to gain some unique travelling experience.

Do Canadians Go to Michigan to Gamble?