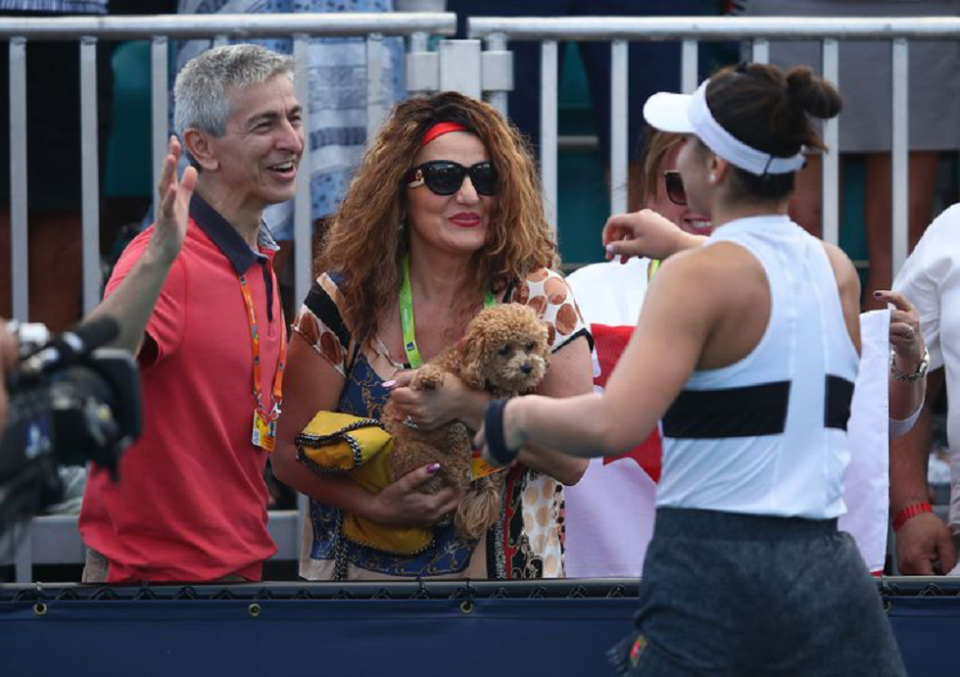 Shrouded in a Louis Vuitton monogram shawl, wearing sunglasses at night, the attention was all on Maria Andreescu’s neon-colored manicure and a ring the size of a tennis ball. Step aside US open, all eyes are on Bianca Andreescu’s mother! When a 19-year-old Bianca Andreescu became the first Canadian to win a grand slam title, beating Serena Williams, who was in hot pursuit of an astounding 24th title, a lot of eyes were landing on her mother Maria Andreescu. And while tennis star Bianca Andreescu is worthy of all the praise being heaped on her, the indisputable winner of the U.S. Open was her mother, Maria, who was serving courtside looks for everyone glued to the TV. Here are some things about her that you may not have known before:

Even the most casual tennis observers, the kind who pay attention to the sport only during grand slams, have taken note of Mama Andreescu. And with good reason.

During her daughter’s quarterfinal match battling Elise Mertens, the camera repeatedly cut to Maria in the stands—an imperturbable source of calm in oversize black sunglasses, big hair, and a Versace looking print top which had the words “Dog Queen” on the collar. Let’s not forget the mention that Maria accessorized with the family pooch, Coco, on her lap.

“My mom’s honestly the coolest person I know,” Bianca said in a post-match interview. In fact, the tennis star posted this all over social media, where Maria has emerged as a mood, a moment, a meme. Talk about #momgoals.

Maria, who is a chief compliance officer for an investment firm in Toronto, graduated from the University of Craiova in her native Romania. (Her husband, Nicu, is an engineer who graduated from the Transilvania University of Brașov.) The couple moved to Canada in 1994, and Bianca was born in 2000. 6 years later, Maria and Bianca moved to Romania for almost three years so that Maria could run a trucking business. Yep, in 2006 is when Bianca started playing tennis. The Canadian star was only 7 at the time while her mama was running her business:

Her influence has clearly rubbed off on her daughter, who remains remarkably calm in high-pressure moments, a skill she says she owes to her mother having introduced her to creative visualization at a young age.

Exercising restraint and keeping emotions in control are essential for any athlete. Bianca picked up this quality from her mother. Her mother made meditation a crucial part of her life. Andreescu has been practising meditation and yoga since the age of 12 and the Canadian star believes that this has helped in her game as she has developed a lot more patience and the grit required to deal with failures. The tennis star described her mother as the coolest person she knows after a US Open match.

Maria and Nicu take special care to ensure that the pup is accommodated whenever they travel along with their daughter. In due course of time, Coco has become a social media celebrity, developing her own fan base!

You will be delighted to know that Andreescu also has an Instagram just like her dog Coco, which is adorably devoted to her daughter but does include its fair share of serves, most of which include huge sunglasses.

Her Instagram serves are completed with what seems to have been Andreescu mere’s signature in the U.S. Open: huge sunglasses, bright nails and hair that is so powerful that you’d believe her if she told you she raised unicorns in her backyard. Some mothers are born to think outside the box of motherhood. Some hear sports games and dresses formally, others hear a fashion show. You’re not going to catch such moms reading her daughter’s scoreboard looking subtle. They bring my A-game to a Little League championship. Their persona simply screams “my daughter may have come to play, but I didn’t.”

New York and Paris Fashion Week are for the uber petite fashionistas but for the first time ever we see the competition end the minute Maria Andreescu entered the US open and sat down in her seat in a high fashion ensemble, and held the court. Just as Bianca will no doubt try to will herself to victory, fans of her mother will be hoping for, if not manifesting, another winning Maria Andreescu moment.

Alexandre Trudeau: The Life and Career of Justin Trudeau’s Brother

Erin O’Toole: 10 Facts About Canada’s Leader of the Conservative Party