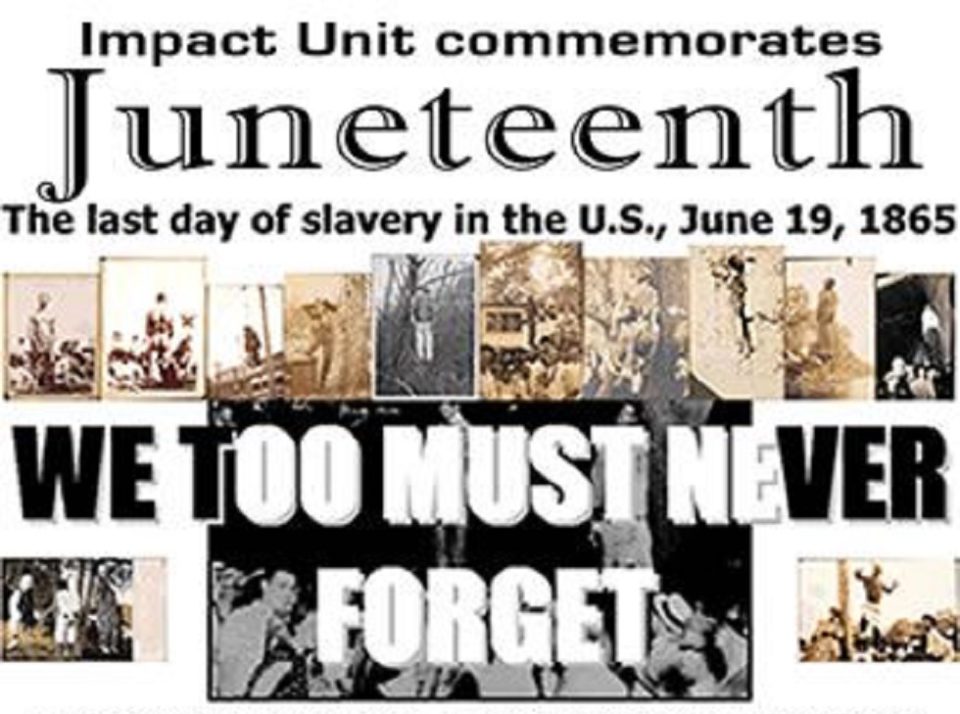 Juneteenth or Emancipation Day is a holiday commemorating the end of slavery in the United States. It is celebrated annually on June 19.

Celebrated annually on June 19, Juneteenth is a holiday commemorating the end of slavery in the United States. The name “Juneteenth” references the date of the holiday, combining the words “June” and “nineteenth.”

What is the origin of Juneteenth?

Juneteenth is the oldest national commemoration of the ending of slavery in the United States, but it has a sad 2 year history.

In 1863, during the American Civil War, President Abraham Lincoln issued the Emancipation Proclamation, which declared more than three million slaves living in the Confederate states to be free.

However in 1865, it was on June 19th that soldiers, led by Major General Gordon Granger, landed at Galveston, Texas with important news that the enslaved were now free. As you can see the news reached African Americans living in Texas 2 years later. Slaves continued working for two and a half years even after President Lincoln’s Emancipation Proclamation – which had become official January 1, 1863.

As the state’s residents finally learned that slavery had been abolished, former slaves immediately began to celebrate with prayer, feasting, song, and dance. Even if some choose to learn of their new employer to employee relationship, many left before these offers were completely off the lips of their former ‘masters’ – attesting to the varying conditions on the plantations and the realization of freedom. Even if they had no place to go, many felt that leaving the plantation would be their first grasp of freedom. Some were heading the opposite direction and going North as it represented true freedom from the South, while the desire to reach family members in neighboring states drove some into Louisiana, Arkansas and Oklahoma. New areas as free men and women brought on new realities to non-existent statuses for black people in America. The following year, on June 19, the first official Juneteenth celebrations in Texas included prayer meetings and the singing of spirituals, and celebrants wore new clothes as a way of representing their newfound freedom.

Over the next few years, African Americans in other states were celebrating Juneteenth day as well, making it an annual tradition. Remembering the memories of that great day in June of 1865 and its festivities is a great motivation. The celebration of June 19th was passed down to all descendants, reassuring each other. Many former slaves and descendants, even now, make an annual pilgrimage back to Galveston on this date. Below is the image of the Emancipation Proclamation from 1863.

What was the reason for the Emancipation Proclamation delay?

There was a delay for the news to reach African Americans living in Texas. Attempts to explain this two and a half year delay have yielded several versions. Many people have detailed anecdotes over the years starting with the story of a messenger who was murdered on his way to Texas with the news of freedom. Another anecdote follows the news that masters deliberately withheld the change so that the enslavers could maintain the labor force on the plantations. Then the news that federal troops actually waited for the slave owners to reap the benefits of one last cotton harvest before going to Texas to enforce the Emancipation Proclamation was rumoured. Then for some, President Lincoln’s authority over the rebellious states was in question.

Is Juneteenth a national holiday?

Juneteenth is not a national holiday in the United States. It became a state holiday in Texas in 1980, and a number of other states have since declared it a state holiday or day of observance. This US centric national holiday is also celebrated outside the United States, with organizations in a number of countries using the day to recognize the end of slavery and to celebrate the culture and freedom of African Americans.

As it is always focused on education and self-improvement, guest speakers are brought in and the elders are called upon to recount the events of the past. Prayer services have become a major part of these celebrations.

In terms of food, certain dishes became popular and subsequently synonymous with Juneteenth celebrations such as strawberry soda-pop and barbecuing, through which Juneteenth participants could share in the spirit and aromas that their ancestors had.

Meats such as lamb, pork and beef which were not available everyday were brought on this special occasion.

In terms of clothes, this is also an important element in early Juneteenth customs and is often still taken seriously, particularly by the direct descendants who can make the connection to this tradition’s roots. On the initial days of the emancipation celebrations, there are accounts of former slaves tossing their ragged garments into the creeks and rivers and adorning themselves with clothing taken from the plantations belonging to their former ‘masters’.

Why are Juneteenth celebrations declining?

Economic and cultural forces led to a decline beginning in the early 1900s. Classroom and textbook education in lieu of traditional home and family-taught practices stifled the interest of the youth due to less emphasis and detail on the lives of former slaves. Classroom textbooks proclaimed Lincoln’s Emancipation Proclamation of January 1st 1863, as the date signaling the ending of slavery – and mentioned little or nothing of the impact of General Granger’s arrival on June 19th. Then the  Depression forced many people off the farms and into the cities to find work. So, unless June 19th fell on a weekend or holiday, there were very few participants available. July 4th was already the established Independence holiday.

Today, Juneteenth is enjoying a phenomenal growth rate. Institutions such as the Smithsonian, the Henry Ford Museum and others have begun sponsoring Juneteenth-centered activities. Within communities and organizations throughout the country, a number of local and national Juneteenth organizations have arisen. They make sure that the celebrations happen alongside older organizations – all with the mission to promote and cultivate knowledge and appreciation of African American history and culture.

Juneteenth today, celebrates African American freedom, achievement and the events of 1865 in Texas. The future of Juneteenth looks bright.

How to think like Elon Musk. First Principle thinking

18 Most Expensive Champagnes in the World