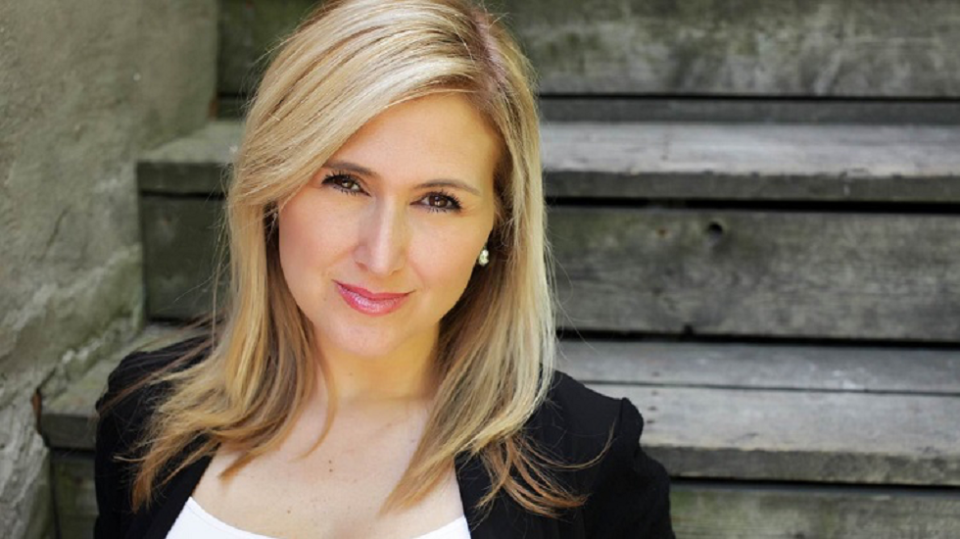 Jennifer Valentyne, is a 51-year-old Canadian Television personality, best known for her work in  Breakfast Television in Toronto from which she was fired in 2016.

Jennifer Elizabeth Valentyne (born May 31, 1967) is a Canadian television personality. Her longest running role was on Breakfast Television in Toronto, where she hosted the “Live Eye” and was the stand in co-host.

Jennifer Valentyne first started working as an intern at City Toronto in 1987  when she began as an intern with MuchMusic and later as a graphics operator in 1987. She produced and hosted a segment called Much Happenings and was known as the Citytv Prize Queen on Speakers Corner.

In 1992 she served the Breakfast Television doing “Live Eye” bits after she was announced to be a regular known by the name “Singing Weather Girl”.

She fills in for Dina Pugliese as co-host on Breakfast Television.

Jennifer made it on-air occasionally in the early 1990s, under the title “The Prize Queen” on Speakers Corner and hosted 30 second spots called MuchHappenings.

She has posed as the Toronto Sun”s Sunshine Girl on five occasions. Besides being a former Toronto Argonauts cheerleader, Jennifer was also a shoe/foot model.

Besides being a television personality, Jennifer is also a singer. She sang on BT Holiday Favourites. Jennifer is a singer/songwriter. She sings jazz standards and originals. She released a Civil Defense in 2001.

Her longest running part was as the host of the “Live Eye” on Breakfast Television in Toronto until she was no longer a part of the show in April 2016. After BT, people know her as a host of The Bachelorette Canada lives After Show on W Network.

Over the course of her career, she has interviewed celebrities such as Sir Richard Branson, Billy Crystal, Rachel McAdams, Channing Tatum and Harrison Ford.Valentyne was a founding member of the comedy troupe “On the Off Ramp” and studied improvisation at The Second City, where she worked with one of the originals, Joe Flaherty, on character building.  Valentyne’s position on Breakfast Television was eliminated On April Fools 2016 (No Joke) Valentyne has volunteer initiatives and is actively involved with Camp Oochigeas, The Children’s Breakfast Club, Dreams Take Flight, Habitat for Humanity and World Vision.

Valentyne graduated from David and Mary Thomson Collegiate Institute While attending Centennial College for Radio and Television Broadcasting, she was the Key590 radio station Cash Car Girl. She was also an intern at MuchMusic and after graduation obtained a full-time position as a graphics operator in hopes of becoming a VJ. She has also been writing songs and singing jazz since she was a teenager and went on tour after releasing two CDs. She is a former Toronto Argonauts cheerleader and has posed as the Toronto Sun’s Sunshine Girl. She is also a singer-songwriter. She sings jazz standards and originals. She released a CD in 2001.

The beautiful host sadly lost her father to cancer in2013. Jennifer is a taken woman, happily married to Greg Valentyne who is a videographer/ camera operator.  The couple has two beautiful children Jackson (Son) and Georgia (Daughter)

Being a television personality, you can find her active on all her social media platforms. You can check her Instagram account here and twitter here. She has a total of 49k followers on Instagram with 986 posts and 114k in twitter with 29.9k tweets. She connects with her fan often with her long threaded tweets and posts pictures on Instagram to give an inside scoop of her personal life. So go check her out for more details.

Jennifer Valentyne: Net worth and Salary

As a long-lasting popular host of one of the most popular Canadian morning shows, Jennifer has been able to amass huge payroll. She has a total net worth of 2 million dollars.