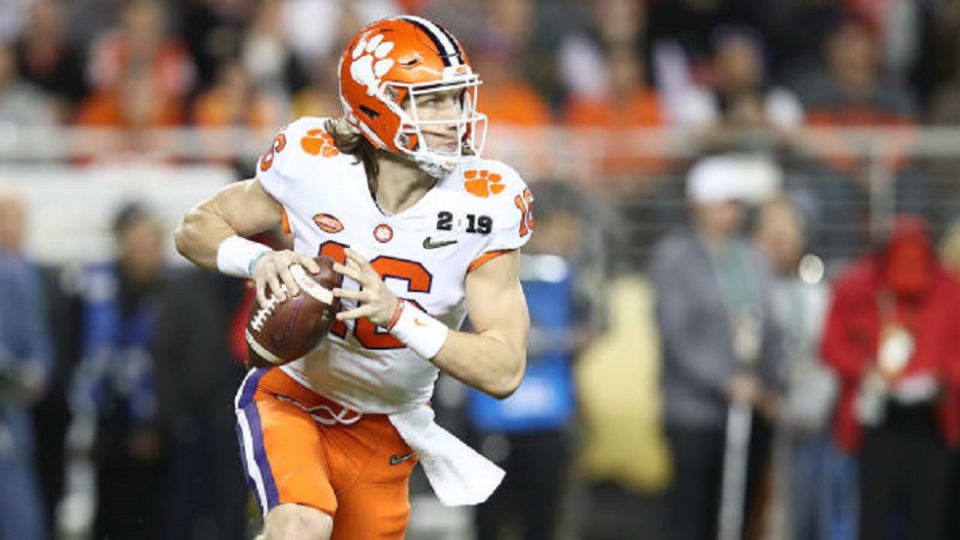 The biggest name in college football right now is Trevor Lawrence. It matters not that Lawrence and his Clemson teammates were unceremoniously dumped from their pedestal by the LSU Tigers in the 2020 CFP National Championship decider.

The upcoming quarterback appears destined for stardom and rates as the only logical projection to be the No.1 pick in the 2021 NFL Draft. For some observers, it can already be crystalized as the ‘Trevor Lawrence Sweepstakes’.

Joe Burrow was the opposing quarterback in that demolition job inflicted by LSU and he’s since gone on to be the first choice in the draft. At 23, he’ll begin his career with the Cincinnati Bengals in the new season. Lawrence, of course, won’t see the legal drinking age until early in October and has plenty more progress ahead of him before making his leap into the pro-ranks.

In 2018, Lawrence’s freshman season was a thing of beauty. Clemson stormed its way through the campaign before a 44-16 win over Alabama in the deciding game. Lawrence became the first freshman quarterback to command a starting role in a national championship-winning team in 34 years.

With his side unbeaten and headed towards a second college championship, Tigers coach Dabo Swinney let it be known that he felt Lawrence was already ‘twice the quarterback right now’ that he had been in 2019.

The loss against LSU was Clemson’s first in 30 games and it showed that Lawrence is not immune to the pressure that rests on his shoulders.

He made no bones of his performance, admitting he ‘didn’t play well enough for us to win’ before candidly confessing that he was maybe ‘thinking a little too much’ about what his performance would require to match the expectations that were attached to his name.

A path to sporting greatness needs some resistance. The greats don’t earn their stripes without some setbacks and so, in a roundabout way, that chastising loss against LSU could be something Lawrence looks back on knowing that it was character building.

Clemson are positioned as favorites in the American football odds for further college championship glory at the end of the 2020/21 season and it could be that Lawrence leads them to the summit once more.

The experts are lined up to sing his praises and it’s a generally held theory that Lawrence is a generational talent. He’s still improving and what he’s already got has hugely impressed the pundits that have been watching his progress.

Where will Lawrence go when the draft rolls around? That’s very much open to interpretation but given his level of talent, it’s increasingly likely that NFL teams will be doing everything they can to have that first-pick when the time comes.

Short-term pain for long-term gain may be the order of the day when it comes to the draft class of 2021. Having that worst record and the first pick that accompanies it is going to be a major talking point.

Luckily for the ultra-cool Lawrence, he doesn’t have to worry about that side of things and can instead focus on his continued development and being the player that everyone suspects he will be when he graduates from college football.