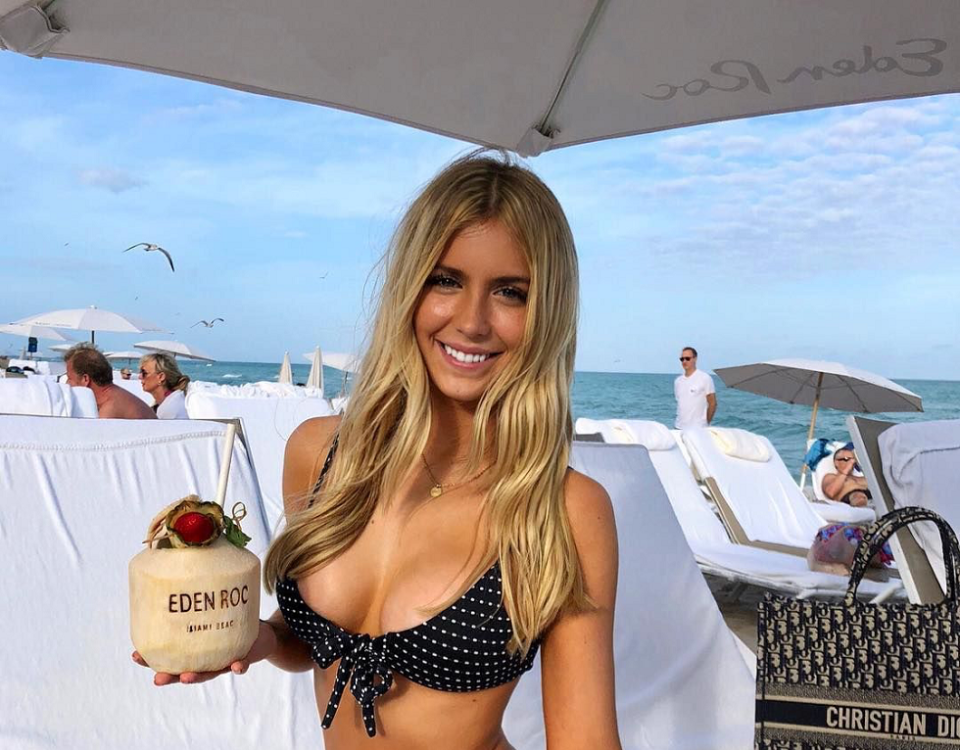 Eugenie and her twin sister, Beatrice Bouchard are named after The Queen of England’s granddaughters: Princess Eugenie and Princess Beatrice of York. Their sister Charlotte is named after Charlotte Casiraghi (the daughter of Monégasque Princess Caroline and her then-husband Stefano Casiraghi). Do the twins have royal blood? Or are their parents obsessed with the royal family? Keep reading to find out.

Why is Beatrice Bouchard famous?

With stunning looks, Beatrice Bouchard is a glamour model and twin sister to tennis player Eugenie Bouchard. Eugenie won the Wimbledon 2012 girls’ tournament, becoming the first Canadian to win a Grand Slam singles title at any level. The twins are, in fact, fraternal twins and biologically do not share any genetic similarities.

Although Eugene Bouchard has made headlines on the tennis court with her game, her sister has a notable presence on social media as a charming model. Beatrice took the social media route to showcase herself as a model. Although she is not known to have any solid modelling deals on the table, she is seen promoting brands on social media. While posting stunning pictures in various outfits, Beatrice makes references to brands such as Princess Polly boutique, Singapore Airlines, Migjorn Suites & Spar. The Instagram influencer/model’s  account features a litany of photos with popular celebrities like Kygo and Neymar.

Is Genie Bouchard a twin?

Genie Bouchard has a twin sister named Beatrice Bouchard. During an interview in 2013, Beatrice said she and her sister share a special connection.

“We joke all the time that we have twin telepathy,” Beatrice told CBC. “She’s always on the other side of the world from me, but we think of things often at the same time or we’ll text each other the same second of the day.”

The two started playing tennis together as kids, but it was Genie who had the real passion for the sport. At age five, the twins started tennis lessons. While Beatrice quit, Eugenie loved it. Bouchard was so disciplined and committed to her sport and her studies, that her mother said: “Genie would come home from school and I’d still be closing the front door and she’d already be in her room doing her homework.”

Her sister also spoke highly of her passion towards the sport. “I’ve seen her work hard from the beginning so it’s not a shock to me,” Beatrice said of her sister’s success. “I knew she would get here, she deserves it.”

Who are Eugenie Bouchard’s parents?

Julie Leclair and Michel Bouchard are Beatrice Bouchard and her sister Eugenie’s parents.

The twins are usually considered to be the only children in the family. But not many know that the twins grew up with their siblings Charlotte and William. Eugenie Bouchard and twin sister Beatrice are two out of four children. They have two younger siblings, Charlotte Bouchard and William Bouchard. Charlotte is their younger sister and William the younger brother. Do the names sound so familiar? Well, they are named after the British Royal family.

The Bouchard children also have two darker haired Bouchard cousins, Mimi and Celeste, who are also famous on social media. Celeste has over 25,000 followers on Instagram while Mimi has over 1 lakh followers and a verified account.

The children grew up in the Westmount neighbourhood of Montréal, where they lived on the same street as former Canadian Prime Minister Brian Mulroney.

Does Beatrice have a boyfriend?

A 2018 article published in Narcity claimed that Beatrice has a boyfriend by the name of Brad Soloman who was born in the family of the founders of metal recycling firm Global Metals.

However, more recently, many rumours came up that Beartice is dating Australian tennis star Nick Kyrgios. The rumours began to rumble when she posted a photo with Kyrgios. Neither Kyrgios or Beartice are yet to talk on their relationship and it remains a photo based rumour.

What happened to Beatrice Bouchard?

In 2020, the influencer celebrated her 26th birthday at the end of February and burnt her face.

To make the most of her big day, Beatrice Bouchard, who has 374,000 followers on Instagram invited her friends and fans to join her at Old Montreal’s Auberge Saint-Gabriel for a huge party in February 2020.

The theme of the night was “Disco Never Dies.” The online personality and all her friends donned their best retro-wear and went all out.

Beatrice was rocking a two-piece powder set covered with sequins and flowers that looked super 70s inspired. She took to social media to share several photos of her head-turning look.

However, it wasn’t just her birthday suit that caught people’s eyes in the past few days.

On Thursday, the influencer revealed on her Instagram that she sustained some large injuries while celebrating her birthday.  Posting a photo showing major burns, in vertical lines along her cheek and upper lip, Beatrice took to her Instagram Stories to share the message:

She followed that with another post. The second photo clearly shows the burn marks on her healing face. While this was a case of bad birthday luck, it could have been much worse for the star as the marks are just a few inches from money making cheeks which light up any photo when she smiles!

It doesn’t look like there will be any lasting damage, though. In a final pic, she came back to her Insta stories to end the scar saga. Beatrice posted a photo that shows that the burns have greatly diminished over the past few days leaving fans with a huge sigh of relief. A great lesson for all of us party people thanks to Beatrice!

Discover the Different Types of Glues for DIY Success